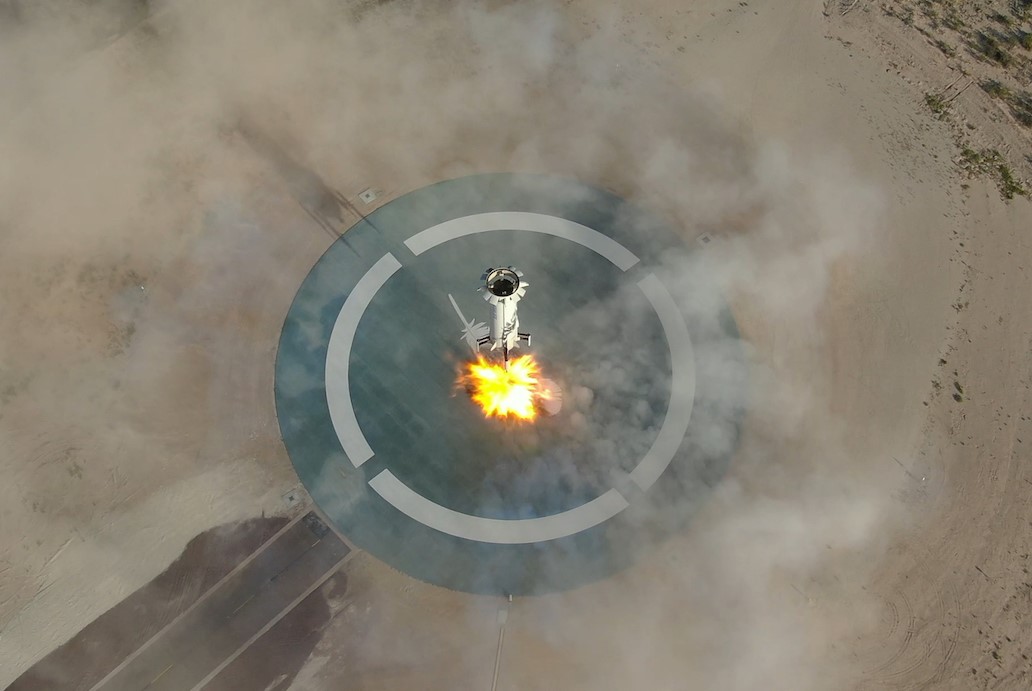 Apollo 11 commander Neil Armstrong famously had to dodge a boulder-strewn crater just seconds before the first moon landing in 1969 — but for future lunar touchdowns, NASA expects robotic eyes to see such missions to safe landings.

And Amazon CEO Jeff Bezos’ Blue Origin space venture is helping to make it so.

Today NASA talked up a precision landing system known as SPLICE (which stands for Safe and Precise Landing – Integrated Capabilities Evolution). The system makes use of an onboard camera, laser sensors and computerized firepower to identify and avoid hazards such as craters and boulders.

NASA says three of SPLICE’s four main subsystems — the terrain relative navigation system, a navigation Doppler lidar system and the descent and landing computer — will be tested during an upcoming flight of Blue Origin’s New Shepard suborbital spaceship. The fourth component, a hazard detection lidar system, still has to go through ground testing.

In a tweet, NASA Administrator Jim Bridenstine said technologies such as SPLICE “can provide spacecraft with the ‘eyes’ and analytical capability” for making safe landings. Blue Origin answered with a tweet of its own:

It’s been a long nine months since New Shepard’s most recent uncrewed test flight — primarily due to disruptions caused by the coronavirus pandemic. Before COVID-19, Blue Origin executives had voiced hopes of flying people on New Shepard by the end of 2020, but that time frame now seems out of the question. (To be fair, Bezos and others at Blue Origin have given optimistic forecasts for flights with people on board since 2016.)

Now another timeline is looming large: NASA’s Artemis program is aiming to land astronauts on the moon by as early as 2024, and the lander being developed by Blue Origin and its partners could play a key role in those lunar missions.

SPLICE could also guide the robotic landings leading up to the crewed missions, as well as future landings on Mars.

Back in 1969, NASA left it up to Armstrong and Buzz Aldrin to pick the right spot within a target landing area that measured roughly 3 miles wide and 11 miles long. The target zone for the Viking Mars landers in 1976 was an even wider ellipse, spanning 62 miles by 174 miles.

Robotic landing technology has improved markedly since then: The landing ellipse for the Mars Curiosity rover in 2016 was a mere 4 by 12 miles. But SPLICE should be able to plot pinpoint touchdowns for future human and robotic explorers.

“What we’re building is a complete descent and landing system that will work for future Artemis missions to the moon and can be adapted for Mars,” project manager Ron Sostaric said in NASA’s news release. “Our job is to put the individual components together and make sure that it works as a functioning system.”

SPLICE’s camera is programmed to take up to 10 images per second, and feed them into a computer that’s pre-loaded with satellite images and landmark coordinates. The computer continuously compares the real-time views with the database to guide the spacecraft toward the safest site, while making sure to avoid hazards.

A version of the terrain relative navigation system will be used when NASA’s Perseverance rover descends to the Martian surface next February.

SPLICE’s navigation Doppler lidar system is designed to kick in during mid-descent, scanning the terrain with laser beams to keep track of the lander’s relative velocity and trajectory.

A separate laser-scanning system, the hazard detection lidar, will look out for obstacles within a 55-yard radius. That’s precisely the kind of system that could have steered the Apollo 11 lunar module well clear of that troublesome crater, avoiding the tense moments that marked Armstrong’s touchdown.

SPLICE could open up landing zones in areas of the moon and Mars that previously couldn’t be considered due to potentially hazardous terrain — for example, the permanently shadowed craters of the moon’s south polar region, or ledges overlooking the huge Martian canyon known as Valles Marineris.

If all goes well with New Shepard’s flights and SPLICE’s other trial runs, precision landing technologies could help robotic lunar probes find their way to a safe landing starting as early as next year.