NASA satellites catch Typhoon Haishen before and after landfall 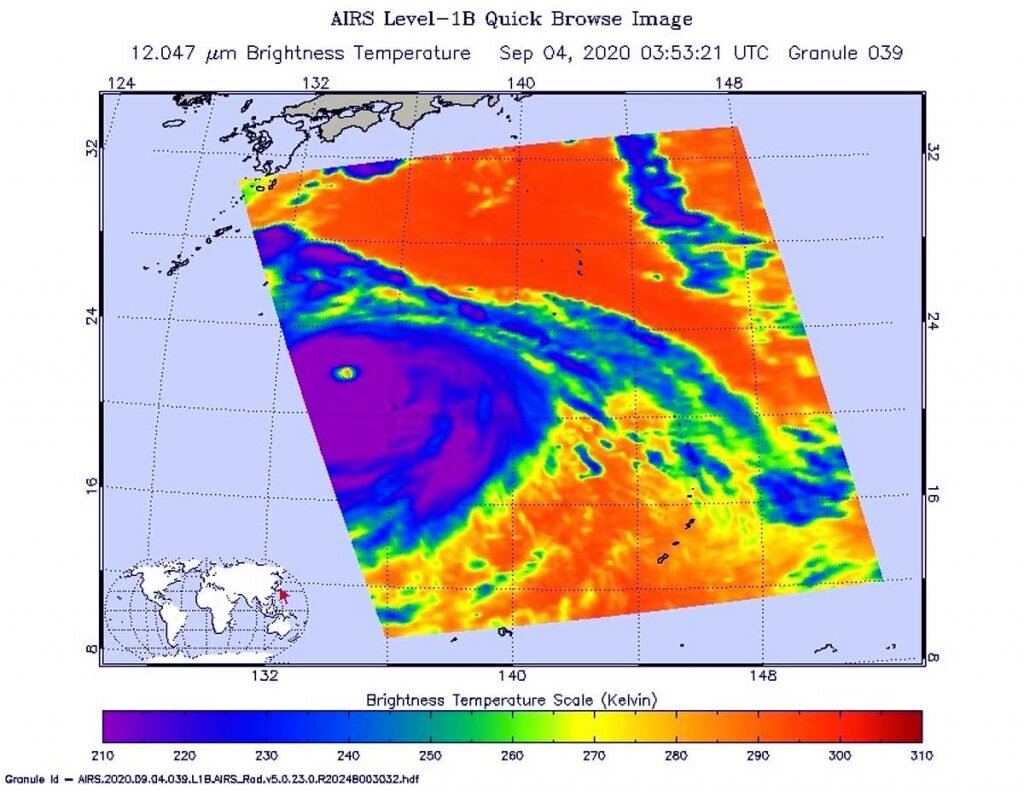 Formerly a typhoon, Tropical Storm Haishen made landfall in South Korea on Monday, Sept. 2 and continued moving north toward China. NASA’s Aqua satellite provided an infrared view of Haishen as a typhoon before landfall and a visible image after landfall as an extra-tropical storm.

Infrared view of Haishen as a typhoon

One of the ways NASA researches tropical cyclones is using infrared data that provides temperature information. The AIRS instrument aboard NASA’s Aqua satellite captured a look at those temperatures in Haishen and gave insight into the size of the storm and its rainfall potential.

Cloud top temperatures provide information to forecasters about where the strongest storms are located within a tropical cyclone. Tropical cyclones do not always have uniform strength, and some sides have stronger sides than others. The stronger the storms, the higher they extend into the troposphere, and they have the colder cloud temperatures. NASA provides that data to forecasters so they can incorporate in their forecasts.

On Sept. 3 at 11:53 p.m. EDT (Sept. 4 at 0353), NASA’s Aqua satellite analyzed the storm using the Atmospheric Infrared Sounder or AIRS instrument. At the time, Haishen was a Super Typhoon with maximum sustained winds near 135 knots (155 mph/250 kph) and strengthened to a Category 5 hurricane/typhoon later that day.

Before Typhoon Haishen made landfall, it moved past southwestern Japan, knocking out power to around 475,000 houses in Kyushu. Haishen brought very heavy rain, storm surge, flooding and landslides as it moved west of Kyushu toward South Korea. In Japan, over 100 people were reported injured, two people died and four people were reported missing.

Typhoon Haishen made its landfall in South Korea’s southeastern coast on Monday, Sept. 7.

At 11 a.m. EDT (1500 UTC) on Sept. 7, the Joint Typhoon Warning Center (JWTC) issued their final bulletin on Tropical Storm Haishen. At that time, Haishen was located near latitude 40.7 degrees north and longitude 128.9 degrees east, about 233 miles north-northeast of Osan Air Base, South Korea. Haishen was moving quickly to the north at 24 knots (28 mph/44 kph). Maximum sustained winds were near 35 knots (40 mph/65 kph). Haishen was moving north and is becoming extra-tropical.

A visible image of an extra-tropical storm

After landfall in South Korea and a track north to China, Haishen moved over China’s Jilin Province as an extra-tropical storm. The China Meteorological Department said Haishen started to move out of the Yanbian Korean Autonomous Prefecture and into Heilongjiang Province at noon (local time) on Tuesday.