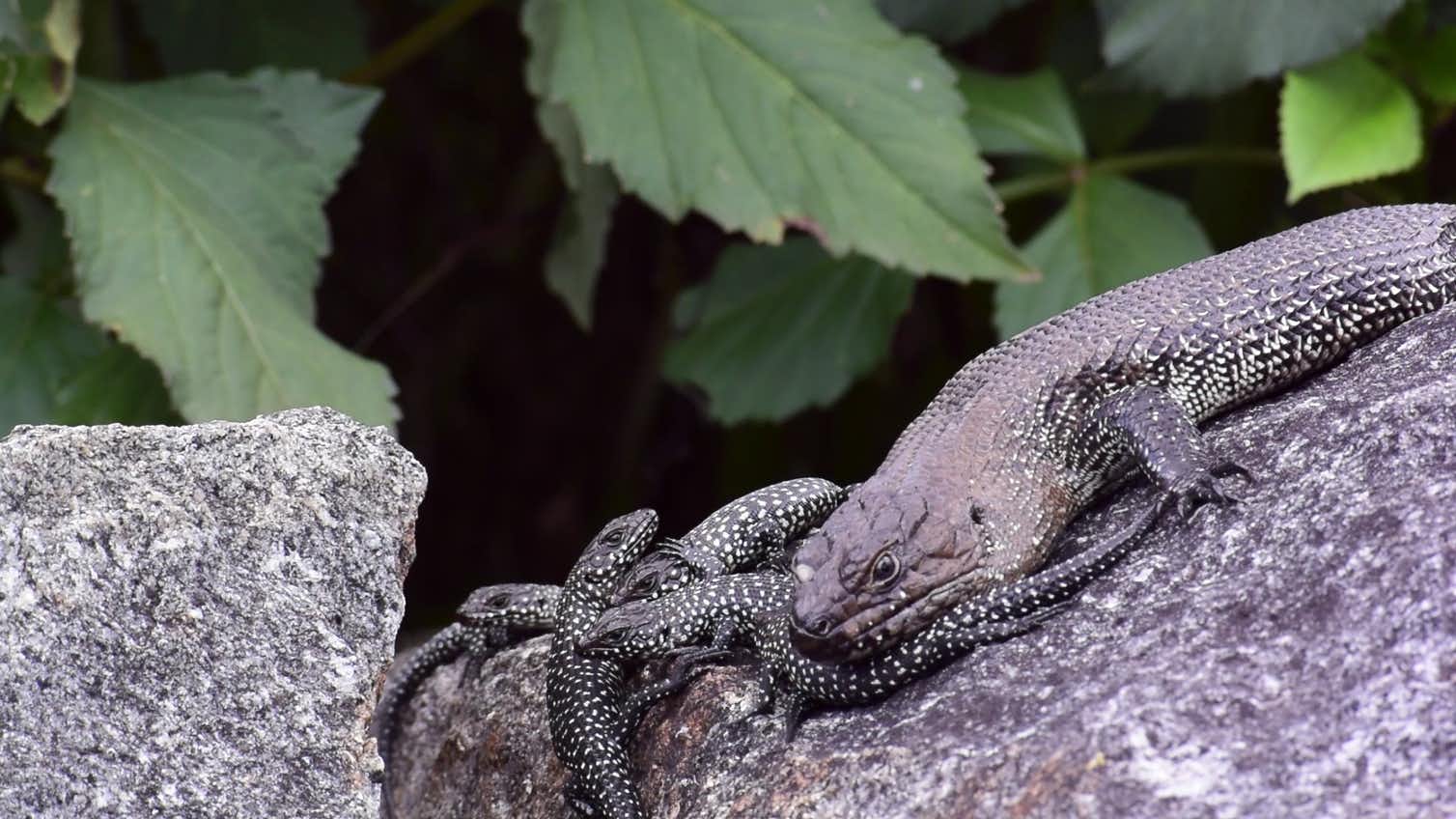 Scientists have filmed a mother lizard attacking a venomous snake much larger than itself as the serpent approached her offspring.

The behavior, which is highly unusual for reptiles, was observed in southeastern Australia’s Snowy Mountains by husband-and-wife research team Greg Watson and Jolanta Watson from the University of the Sunshine Coast.

Using cameras and thermal imaging, the pair documented a mother lizard of the species Egernia cunninghami—better known as Cunningham’s skink—aggressively attacking an eastern brown snake (Pseudonaja textilis) by biting the serpent and remaining attached to it for several seconds before releasing her grip.

The brown snake—a species that grows to about seven feet in length—was approaching some of the mother’s young when she attacked it.

The researchers also documented two adult skinks attacking and biting another eastern brown snake during a similar encounter, according to a study published in the Australian Journal of Zoology.

In addition, the team also witnessed 12 incidents of skinks chasing and/or attacking magpies in the presence of their offspring.

For their research, the scientists observed the skinks, which are native to southeastern Australia, on 32 days over a three-year period.

“We originally set out to record how species such as skinks will cope with climate change. But this evolved into a study of the fascinating and surprising social bonds between lizard offspring and their parents,” the Watsons wrote in an article for The Conversation.

According to the researchers, the latest observations are significant because most reptiles display little sign of caring for their young and aggressive behavior towards predators such as this has “rarely been recorded in the natural environment,” they wrote in the study.

Cunningham’s skinks—named after Alan Cunningham, the explorer who found the first specimen of the species—are highly unusual among lizards and reptiles given that they live in stable, social groups.

“The species has strength in numbers—living in a group makes it easier to spot threats, which helps the group survive,” the authors wrote. “In these groups, mothers give birth to live young (rather than eggs) then live alongside their kids, sometimes for several years.”

In some species of skink, mature adults sometimes have been documented as killing offspring of their own kind. However, the researchers did not observe behavior like this among the Cunningham’s skinks, or, in fact, any aggression at all towards each other.

The researchers say there is a possibility that when the skinks acted aggressively towards the snakes and magpies they may have simply been engaging in self-defense or territorial behavior.

But they conclude that this aggressive behavior does represent some form of parental care, either directly or indirectly. The team hopes that future research could yield further insights into this behavior.