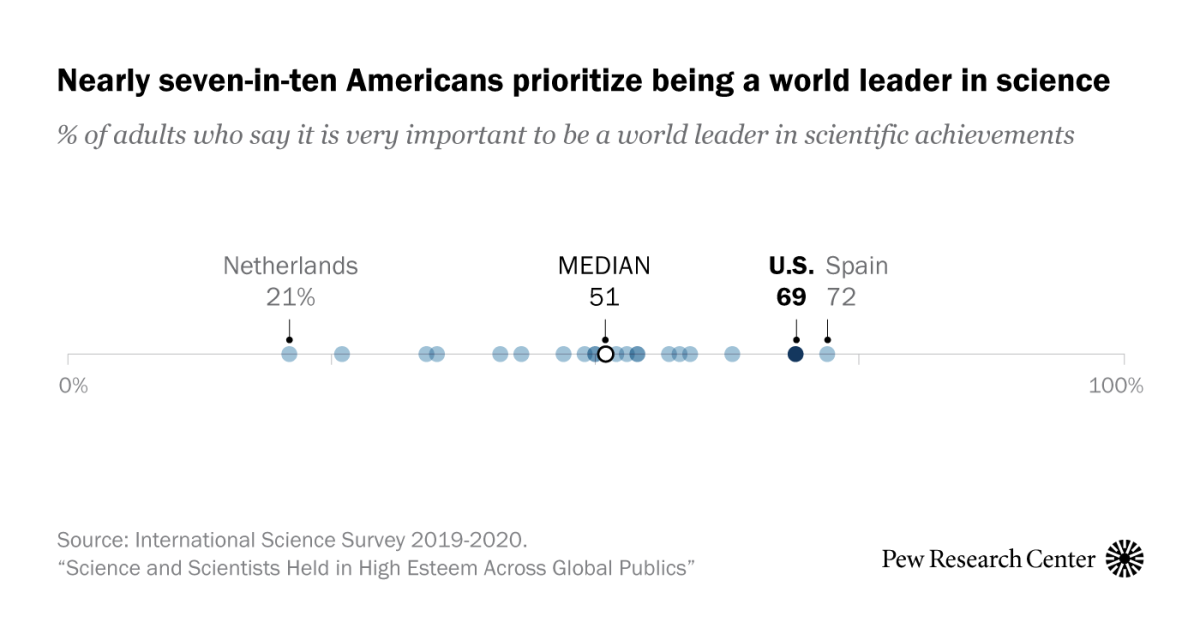 Americans place high priority on being a world leader in scientific achievement and see positive returns from government investments in scientific research, according to a Pew Research Center survey of 20 publics conducted between October 2019 and March 2020.

The survey of adults in 20 countries or other publics with sizable or growing investments in scientific and technological development finds nearly seven-in-ten Americans (69%) think it is very important for the United States to be a world leader in scientific achievements. The U.S. stands out, along with Spain, for the high share of its citizens to hold this view. In many other publics, half or fewer place high importance on being a world leader in science.

Here are the questions used for this report, along with responses, and its methodology.

The new international survey in publics across Europe, the Asia-Pacific region, and in the U.S., Canada, Brazil and Russia comes as the global landscape for scientific research and innovation has shifted. In the past, the U.S. has had the largest share of spending globally on research and development. Sweden, Germany and Japan have also made sizable investments in research and development over time. But recent years have seen increased investments by Taiwan, South Korea and mainland China.

China is expected to equal or exceed the U.S. in global research and development investments in the coming years, according to data collected by the Organization for Economic Cooperation and Development.

Americans hold scientists as a group in high regard. About three-quarters of U.S. adults (77%) have at least some trust in scientists to do what’s right for the country, including 38% who have a lot of trust. Trust in scientists is widely held across the global publics surveyed, and views in the U.S. are very similar to the median opinion on this question.

And while there is broad agreement that the U.S. should be a leader in science, Americans see room for improvement when it comes to the current state of science, technology, engineering and mathematics education in the country. About half (52%) say STEM education at the college and university level is above average or better; nearly as many (46%) say it is average or below average. Ratings are particularly low for STEM education at the primary and secondary school level: Just 31% of Americans rate instruction at this level as above average or the best in the world. Republicans and Democrats are generally aligned in their assessments of STEM education in the country.

Note: Here are the questions used for this report, along with responses, and its methodology.

Cary Funk  is director of science and society research at Pew Research Center.

Alec Tyson  is an associate director of research at Pew Research Center.

Brian Kennedy  is a senior researcher focusing on science and society research at Pew Research Center.

Courtney Johnson  is a research associate focusing on science and society at Pew Research Center.