Microsoft Surface Duo Review: Exciting But Not Worth Buying 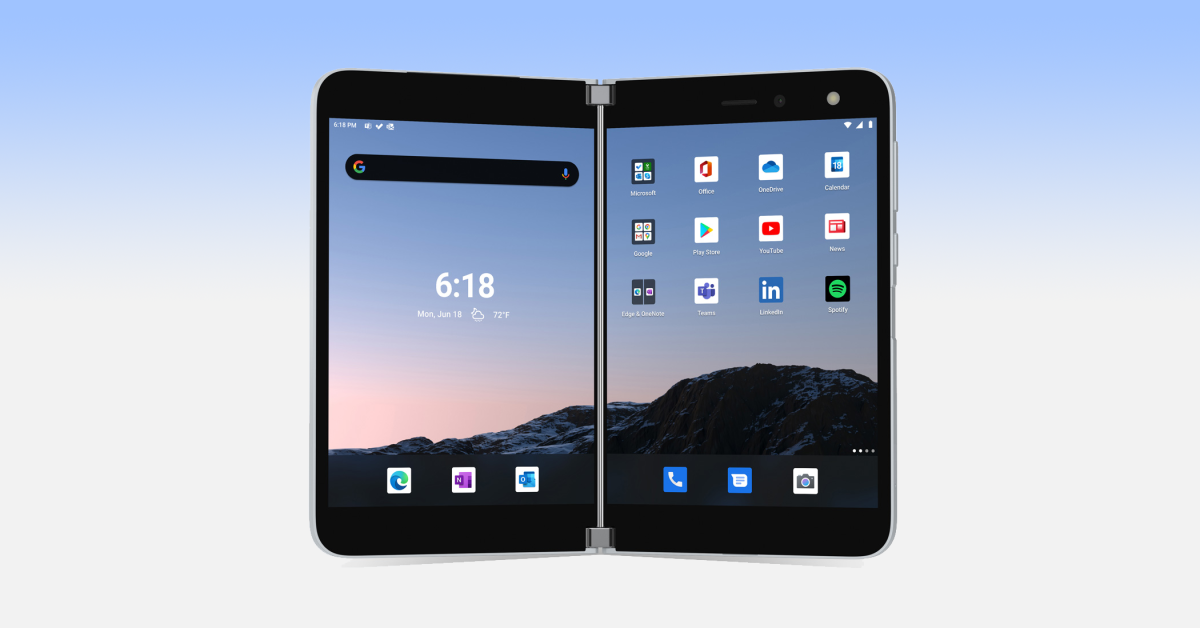 Are two screens better than one? Microsoft seems to think so, as evidenced by its long-anticipated Surface Duo, a double-screened Android smartphone that closes and unfolds like a spiral notebook. The concept’s intriguing, but the Duo makes compromises compared to the latest high-end folding smartphones, like the recently launched Samsung Galaxy Z Fold2. So is it worth the relatively steep $1,300 price tag?

Don’t get me wrong. I’ve been craving the Surface Duo—or something like it—since Microsoft teased the concept over a decade prior with its two-screened Courier tablet. The idea, while revolutionary, was pretty straightforward: instead of a tablet with a single screen, just attach two identical touch screens together, letting you take notes on one side while browsing the web on the other, for example. This idea, conceived before the advent of foldable devices (of mixed quality) like the rebooted Motorola Razr, still has a certain appeal, and the Surface Duo brings that concept back with a vengeance. Unfortunately, it doesn’t do a great job at much else.

The device itself is downright futuristic. The grey smartphone, covered in identical panes of glass on each side, feels like it belongs in a science-fiction movie. Its flat on all sides, save for its hinged “spine,” where the displays end with rounded edges. On its side are volume and power buttons, along with a thin fingerprint sensor embedded in one of the screen’s borders. Your thumb rests there naturally when you try to open the Duo, making it a seamless transition from off to on. Upon opening, you’re greeted with two huge 5.6-inch AMOLED screens with a pretty impressive 1800 x 1350 resolution (that’s better than 1080p). The AMOLED technology makes colors pop, while keeping the device as thin as a single-screened smartphone.

That hinge is cool, sturdy, and folds all the way around so you can use the Duo as a phone with a single screen. But if you’re looking for a single, seamless screen on which you can enjoy videos and games, look elsewhere. While the two screens are plenty fun to look at, turning them into a single display to watch some Netflix is an ultimately disappointing experience due to the thin yet ever-present gap between them. Apps and text isn’t split between the screens; both are treated as a single display, the gap a vertical sliver obscuring whatever lies beneath.

Size can be an issue here, too—don’t even think about squeezing it in your pants pocket. While shorter than a flagship phone like the Samsung Galaxy Note20 Ultra 5G, it’s much wider, making it a cumbersome addition to unaccommodating jeans. For days I kept it in my back pocket, only to freak out when I began sitting down, only to realize this expensive piece of tech was moments from getting crushed. Now it lives in my backpack—which isn’t necessarily a bad thing.

In fact, the form factor of the Surface Duo has a good chance at changing the way I interact with smartphones in the first place. The phone’s book-like design makes me less likely to tap on the screen or hit a button to wake it up and idly browse. You’ve gotta actually open it up to waste time. I’m more intentional when I open it, choosing to read a book more often than read some tweets.

That being said, the Surface Duo isn’t for everyone. It’s pretty fickle. Some last-minute software updates alleviated a number of issues and slowdowns, but it remained a pretty buggy experience overall. Taps sometimes failed to register, while flipping the Duo to use it in single-display mode often means double-tapping on the correct screen to reorient the device, as it occasionally moves the app in use to the unused display.

Photographers won’t find much to love here. The Duo’s 11-megapixel camera is abysmal, frankly, but can shoot portrait mode shots to varying degrees of effectiveness. There’s also support for recording 4K video at 60 frames per second, though with an unappealing desaturated, blueish tint.

Microsoft’s own first-party apps, like Office, work as expected. While using OneNote on both screens, one serves as a sketchpad while the other acts as a menu for accessing notebooks and recently viewed pages. To-Do allows you to see your list of tasks on one screen, while the other displays details for each that you can easily edit.

In fact, productivity is the Duo’s strong suit. The ability to have two different apps on each screen, create app pairs that launch in tandem, drag and drop text or images from one app to another, all result in a perfect device for getting stuff done.

Some other apps also take advantage of the Duo’s unique design. Amazon Kindle’s app, for instance, treats each display like the page of a book. That got me reading on a smartphone way more often; I usually go for an e-reader instead. But even in the Kindle app I ran into bugs that would force me to drag the app into full screen mode every time I opened the Duo, or ruin the two-page interface by spreading a single page across both screens, the hinge obscuring line after line. Few apps promise support for such a rare form factor, and there’s no guarantee developers will flock to dual-screened devices.

The Surface Duo runs a pretty modified version of Android 10, while Microsoft has promised to support upgrades up to Android 12. If you’re deep in Apple’s iOS ecosystem, relying on apps like FaceTime and Messages or services like iCloud, switching to a new platform could seem daunting. But if the majority of your services are available on both iOS and Android, you might find the Duo compelling enough to consider.

Should you get the Surface Duo? Probably not—at least not yet. Its buggy software, dearth of double-screen app support and underwhelming camera will only frustrate people trying to do anything besides write emails and take notes. Video lovers can find other smartphones that provide better viewing experiences for the same cost. Gamers will find its lack of graphical acumen disappointing. There’s no wireless charging, NFC support for mobile payments, or any form of dust or water resistance. It doesn’t even have a headphone jack.

But Microsoft’s Surface Duo is still one of the most exciting gadgets I’ve used in a while. It makes me wish for a future where devices like this—gadgets that push the envelope in terms of design and possibilities—become the norm. Like the iPad when it debuted, the Duo suggests a wealth of potential. How will developers use the extra real estate to try out new ideas and experiment with that flexibility? What new games might be possible on a dual-screen device? Yes, the Duo is half-baked, a trend when it comes to Microsoft’s more experimental endeavors—like the gorgeous but underwhelming Surface Pro X. But it’s one of the few gadgets I’ve used lately that’s left me genuinely excited for next year’s model.

The Leadership Brief. Conversations with the most influential leaders in business and tech.