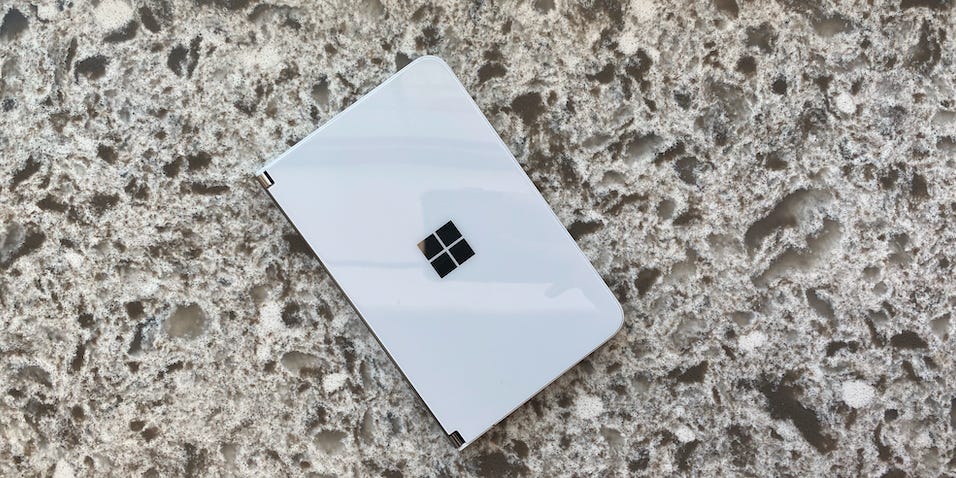 When you buy through our links, we may earn money from our affiliate partners. Learn more.

Microsoft’s original Surface popularized the idea that a tablet computer could replace the traditional laptop following its 2012 launch.

Now, the tech giant is hoping to make similar waves in the smartphone market with the launch of its Surface Duo, a $1,400 Android smartphone that, as its name implies, has two screens. It’s available starting September 10.

The Surface Duo is Microsoft’s take on the foldable phone, a trend that smartphone giants like Samsung, Huawei, and Motorola spearheaded in 2019. The Duo consists of two 5.6-inch displays that form one giant 8.1-inch display when combined.

Microsoft is betting that the ability to switch between phone mode and tablet mode will appeal to consumers that lean on their mobile devices for productivity and entertainment — and prioritize extra screen real estate over portability.

For the most part, Microsoft succeeds at this with the Surface Duo. The company has clearly thought about how to best optimize those dual screens in the most useful way rather than just doubling the size of your phone’s display.

The way certain apps, like Microsoft News and the Edge browser, are tailored to work intelligently across both screens make me optimistic about Microsoft’s re-entry into the mobile market and the potential for foldable phones.

But, at the same time, I’ve always felt that laptop-tablet hybrid devices are only worth it when they can successfully replace both of those devices. The same should hold true for gadgets that seek to replace your smartphone and tablet, too. On that front, the Surface Duo excels in some ways but falls short in others.

Here’s a closer look at what it’s been like to use Microsoft’s Surface Duo.

It’s no understatement to say the Surface Duo looks unlike any smartphone I’ve seen before. It opens and closes like a book, with an exterior coated in Corning Gorilla Glass with Microsoft’s logo stamped right in the center of its cover. Opening the device reveals two identical AMOLED touch screens that each measure 5.6-inches and together turn into an 8.1-inch display.

It is quite wide, however, which can make it feel a bit unwieldy to use as a phone and nearly impossible to operate with one hand. The chunky borders that sit above and below the Surface Duo’s screens also feel dated at a time when most premium smartphones feature edge-to-edge screens.

The biggest difference between the Surface Duo and other competing foldables like the Galaxy Z Fold 2 is in its hinge. The Surface Duo’s screen isn’t made of flexible glass or plastic that actually bends; instead, there’s a 360-degree hinge that attaches the two screens together. Although Microsoft says the Surface Duo’s two screens create an 8.1-inch display when combined, the hinge running down the middle of the device makes it difficult to really see the two screens as one contiguous display.

That hinge, however, enables my favorite feature about the Surface Duo: the multiple forms it can take. Because the screen can bend all the way back, you can hold the Duo like a book (which Microsoft calls Book mode), open it up like a laptop (Compose mode), stand it up like a tent (Tent mode), or fold its screen all the way back so that it resembles a more traditional smartphone (Single Screen mode).

Since there’s no exterior display, you can also slightly open the Duo just to get a peek at the time and date (Peek mode), although I don’t find myself using this very often.

Compose mode sounds appealing in theory — who hasn’t found themselves frantically pecking away with two thumbs to take notes or write long emails on their mobile device? But the size of the Duo makes it feel too cramped to type in the classic home row position we’re used to when typing on a laptop, but too large for tapping away with my thumbs. I preferred to hold the Duo upright and type like I would on a normal smartphone.

Still, the Surface Duo’s malleable design is its biggest asset; I love propping up the Duo in Tent mode throughout the workday to use it as a second screen. And, when I want to check the news or browse through my inbox, holding it like a book feels much more natural than holding a traditional smartphone.

This makes it more versatile in some ways than the Galaxy Z Fold 2. Samsung’s foldable smartphone has some benefits over the Duo — for example, its seam is barely noticeably during use, making it much more useful as a tablet. Like Microsoft, Samsung has also made an effort to tailor the software in ways that put the phone’s flexibility to good use, particularly through its Flex mode.

But, if you’re anything like me, you value the ability to prop up the phone’s display to use it as a second screen during the work day, or are thrilled about the prospect of standing it up on your tray table during your next flight to watch Netflix. The Galaxy Z Fold 2 may be better at replacing your traditional smartphone compared to the Duo, but it simply can’t compete in that regard.

With a foldable device like the Surface Duo, software is just as important as the hardware. The Surface Duo comes with plenty of features designed to make the most of its extra screen real estate, enabling you to run multiple apps separately on both displays or devote both screens to one single app. Microsoft is pitching the Surface Duo as a productivity device, so it comes preloaded with Microsoft’s suite of Office apps like Office 365, Outlook, and OneDrive.

Although using two apps separately on either display can be useful, the Surface Duo really shines when it comes to apps that are optimized to run across both screens.

Take the Microsoft News app for example. The app shows headlines and topics of interest on one screen, while dedicating the entire second screen to a story. You can also choose to view a news story in a reading mode that spans both screens and allows you to flip through pages like a book. That same page-turn effect works in Amazon’s Kindle app as well.

Another strong example of how apps can be tailored to make the most of the Duo’s dual screen is Google Drive. When expanding the app to occupy both screens, you’re able to view your list of documents and spreadsheets on one display and view a single document in full-screen mode on the other.

The vast majority of apps, however, aren’t optimized in this way to run across both displays. Rather, they just stretch across both screens, which isn’t very useful in most situations since the hinge noticeably divides the screen.

Microsoft is well aware that many people will likely be using the Surface Duo to run apps separately across screens, which is why it lets you pair two apps together that can be launched with a single tap — a feature that Samsung’s Galaxy Z Fold 2 also offers.

Microsoft is trying to solve a clear problem with this capability. After all, no one likes switching between apps just to accomplish a basic task like copying photos or text between apps.

The problem, however, is that these actions are often spontaneous. I don’t always know which app I’m going to want to switch to, which makes it difficult to come up with app groupings that are useful. It requires you to think differently about how you’re using your phone on a regular basis, which can take some getting used to.

For example, it took me nearly a week of using the Surface Duo before I realized I should group Slack with Google Drive so that I can view my document of current projects alongside my work chat.

Overall, the Surface Duo was fairly quick at changing orientations and adapting its software when switching positions after I installed a much-needed recent software update. There are still some instances of lag, such as when switching between the front and rear camera shooting modes, or transitioning an app from Tent mode to Compose mode.

The Surface Duo’s 11-megapixel camera can take decent photos, but this isn’t the right phone for mobile photography enthusiasts.

Take a look at the images below, and you’ll notice that the trees look sharper in the images taken on the iPhone and Samsung’s phone compared to the Surface Duo.

Unlike those phones, the Surface Duo only comes with one lens, meaning it doesn’t offer as much flexibility as the iPhone or Samsung’s foldable in terms of shooting modes.

The Microsoft Surface Duo is built to last for a long time on a single charge. I am able to get through a full day’s worth of usage and still have more than 30% of power left over the next morning. Battery life will always vary depending on how you use your phone, but my usage includes a mix of checking email, browsing the web and social media, taking photos, leaving the display on for most of the day with Slack on screen, and occasionally streaming video clips.

If you plan on using the Surface Duo primarily for video chatting, streaming video, and gaming, you’ll probably get less mileage in terms of battery life.

With its large and vibrant displays, useful multitasking features, and long battery life, Microsoft’s Surface Duo shows promise. In an era when we use our mobile phones for just about everything, from watching movies to chatting with coworkers and reading books, it makes sense that companies like Microsoft are looking for ways to maximize the amount of screen space our phones offer.

But, the Surface Duo’s unconventional shape means it sometimes feels like an awkward replacement for your smartphone. Unlike a regular smartphone, it’s difficult to use the Surface Duo discreetly or with one hand, and it’s not the most convenient phone for those who take lots of photos.

Plus, for $1,400, the Duo doesn’t offer everything you’d expect from a premium phone of that price. It lacks 5G connectivity, for example, and only comes with one camera at a time when some smartphones offer six. The camera quality also isn’t great, particularly when compared to rivals, like the iPhone 11 Pro and Samsung Galaxy Z Fold 2.

Still, anyone interested in the Surface Duo is likely looking for something that differs from the traditional smartphone experience anyhow. The question for you, however, is whether the Surface Duo’s benefits regarding versatility and productivity listed above outweigh the quirks and drawbacks you’re likely to run into.