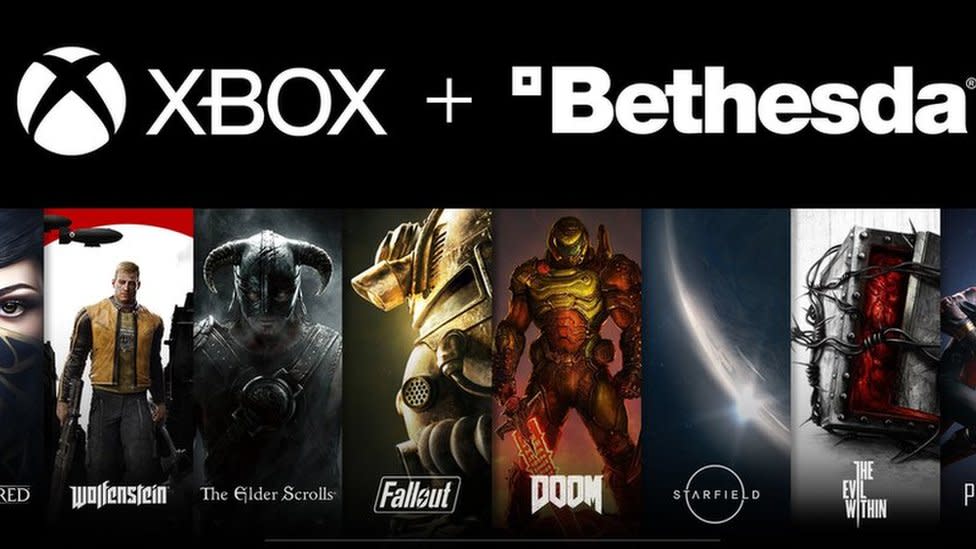 Xbox-owner Microsoft has acquired the games company behind blockbuster titles including Doom, Fallout, Skyrim and Wolfenstein.

Xbox has said that the publisher’s franchises would be added to its Game Pass subscription package for consoles and PCs.

This could help make the forthcoming Xbox Series X more attractive than the PlayStation 5 to some players.

Both machines are due to launch in November.

Game Pass already gives players access to more than 200 games. Microsoft includes first-party titles at point of launch to those signed up to its “ultimate” package without further cost.

By contrast, Sony has opted to charge players up to £70 for its own major releases and does not intend to include new titles in its PlayStation Plus Collection service.

It is not yet clear how the takeover affects Bethesda’s plans to create The Elder Scrolls 6, Starfield and other unfinished games as cross-platform titles.

In a statement, Xbox chief Phil Spencer said the two firms “shared similar visions for the opportunities for creators and their games to reach more players in more ways”.

Pete Hynes, senior vice president at Bethesda Softworks, said the deal offered “access to resources that will make us a better publisher and developer”.

“We’re still working on the same games we were yesterday, made by the same studios we’ve worked with for years, and those games will be published by us,” he wrote in a blog.

In addition to the games titles, Microsoft will now also own the id Tech games engine, developed by Bethesda’s sister firm id Software.

Doom Eternal, which was released this year and received praise for the quality of its graphics, was built using the most recent version of id Tech.

“Microsoft has often been criticised for its lack of heavy-hitting first-party games franchises when compared to Sony and Nintendo. This deal catapults Microsoft’s games portfolio into a much stronger position,” he told the BBC.

Legendary games developer John Carmack – who pioneered some of the technologies behind the original Doom, Wolfenstein and Quake games – has also suggested the acquisition could bring him back to some of those franchises.

Until recently, he had served as the chief technology officer of Facebook’s Oculus virtual reality division.

His return would build further excitement for future Xbox games, and thus benefit the brand.