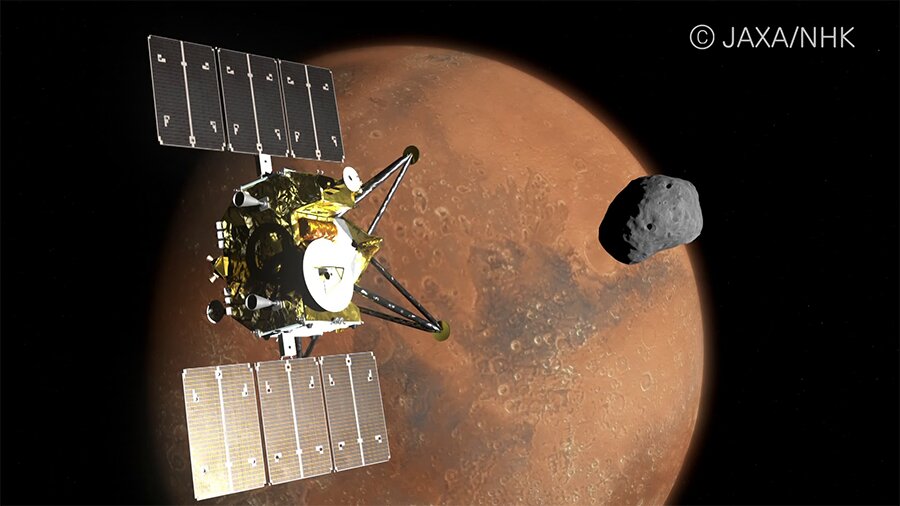 The Japan Aerospace Exploration Agency (JAXA) and Japan Broadcasting Corporation (NHK) have decided to jointly develop the Super Hi-Vision Camera that is capable of filming 4K and 8K images in space for JAXA’s Martian Moons eXploration (MMX) mission. This would be the first time in history that 8K ultra-high-definition images of Mars and its moons are taken in proximity. By combining the actual flight data of the MMX spacecraft and the images taken by the Super Hi-Vision Camera, the exploration of the MMX spacecraft around Mars and its moons (the Martian system), 300 million kilometers from the Earth, will be recreated.

JAXA is currently developing the MMX spacecraft to be launched in JFY 2024, with the aim of clarifying the origin of the Martian moons and the evolutionary process of the Martian system. MMX is an internationally high-profile sample-return mission that aims to conduct scientific observations of the Martian moons, Phobos and Deimos, and of Mars, as well as land on Phobos to collect “sand” from its surface to return to Earth.

NHK is developing the Super Hi-Vision Camera in order to visualize MMX’s challenges in ultra-high-definition images and broadcast them widely, with cooperation from JAXA. Images taken at regular intervals are partially transmitted to Earth to create a smooth image. The original image data is planned to be stored in a recording device in MMX’s return capsule and brought back to Earth.

Over the years, JAXA and NHK have continued to take on the challenge of delivering images of space development since the live broadcasting from the space shuttle in 1992, followed by high-definition filming from the Kaguya lunar orbiter, 4K filming from the International Space Station (ISS), and visualizing the asteroid probe Hayabusa2 landing operation. This time, JAXA and NHK aim to take the world’s first 8K images of Mars and its moons by utilizing the expertise accumulated through the past cooperation. In addition, JAXA and NHK aim to visualize the actual behavior of the spacecraft with the Super Hi-Vision Camera, providing a high level of reality by combining the 4K/8K images and MMX’s flight data. These can also be used for the operation of the spacecraft.

By filming MMX’s mission in the Martian system, 300 million kilometers away from Earth, with the newly developed Super Hi-Vision Camera, JAXA and NHK will work together to convey the appeal of a new horizon that has never been seen in detail before.