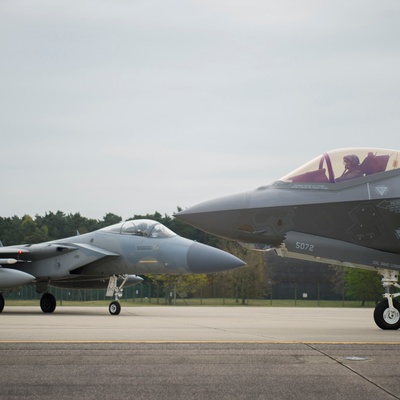 While it’s not unusual for companies to battle one another for weapons deals, these fights often occur behind the scenes, as lobbyists and executives spar inside the Pentagon and on Capitol Hill.

But the fight over whether the U.S. Air Force should buy one or two types of $80 million fighter jets is spilling into the public view, in the pages of the trade press and in think tank reports. Air Force leaders say they need both the F-35 Lightning II, the newest fighter in the U.S. military arsenal, and the F-15EX, the latest version of the twin-engine jet first flown in 1972.

Early last year, Lockheed began to fight back against Boeing’s reappearance on the service’s tactical-jet shopping list.The battle became a war in July when the Air Force placed a $1.2 billion order for eight jets and said it might spend up to $23 billion to buy up to 144 new F-15s in the coming years.

It’s rare for a conservative think tank to explicitly call for canceling defense programs; typically, they argue for increasing defense spending and buying more weapons. But the influential Heritage Foundation has consistently urged the Air Force not to buy the F-15EX.

“I’m just kind of surprised by the broadsides that have been occurring lately,” Jeff Shockey, vice president of global sales and marketing for Boeing Defense, Space & Security and Boeing Global Services’ government services portfolio, said in an interview Friday.

The stakes are also higher now as defense spending has flattened and not expected to grow in the coming years. The latest attacks on the F-15 come as Congress is reviewing the fiscal 2021 defense spending and policy bills.

J.V. Venable, a retired Air Force F-16 pilot who is a senior research fellow at Heritage, compared the F-15EX to antiquated dial-up internet. “In deciding to fund the acquisition of the F-15EX, Congress has chosen the dial-up option,” he argued in Defense One last month. “When the Air Force signs that contract, it will be stuck with already-dated equipment for the next 30 years.”

This week, the Mitchell Institute, the Air Force Association’s internal think tank, published a report that argues the F-15EX “ may address immediate shortfalls, but it ultimately fails to anticipate or prepare for a much more demanding future combat environment.”

More than a decade ago, as the F-35 struggled with a long list of development problems and cost overruns, Boeing and its surrogates pushed Air Force leaders to consider buying new F-15s or even Navy F/A-18 Super Hornets. Now as the service prepares to buy new F-15s for the first time in nearly two decades, the script has flipped.

The Air Force appears to have been persuaded by arguments that the F-15 is cheaper to fly than the F-35, and can more easily accept new applications and weapons.

But Lockheed is firing back with arguments that the fifth-generation F-35 has stealth, weapons, sensors, and data capabilities that make it a far superior choice.

“We believe the F-35 is a superior platform,” said Michele Evans, the president of Lockheed Martin Aeronautics, in an interview Thursday. “With its fifth-[generation] capabilities, we believe it brings capabilities that other platforms can’t.”

The F-15EX is intended to replace F-15C Eagles, planes that are largely flown by the Air National Guard for homeland defense. The F-15C is considered an air superiority fighter — meaning it’s fine-tuned for air-to-air combat — and cannot strike ground targets. But the Air Force also flies the ground-pounding F-15E Strike Eagle, of which the F-15EX is a modernized derivative.

“The F-35 and [F-15]EX are very complementary to one another,” Shockey said. “They do very different mission sets.”

Evans, who oversees Lockheed’s combat aircraft projects, said she does not view the F-15EX as a threat to the F-35.

“I certainly respect the Air Force, that they’ve made a decision to procure the F-15EX and we’re going to continue to make sure that we’re driving upgrades and capabilities into the F-35 to keep it competitive and keep it the platform of choice for the U.S. Air Force, the Navy, the Marine Corps and our partner and [foreign military sales] nations,” she said.