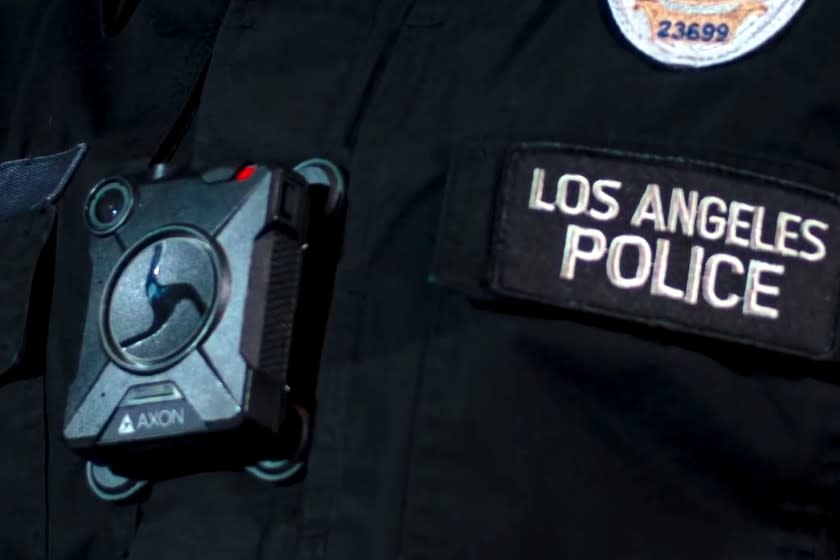 The Los Angeles Police Department’s investigation into a woman’s claim that her jaw was fractured by a police projectile during summer protests has so far turned up zero police video of the shooting — possibly because many of the officers at the scene weren’t wearing cameras, LAPD officials said Wednesday.

“There are limited body worn videos for this incident due to officers and detectives responding from assignments that do not issue body worn cameras,” the LAPD said in a video released online Wednesday.

Instead, police released footage that they said was from the general time and area where the injured was suffered by Abigail Rodas — one of several named plaintiffs in a sprawling class-action lawsuit over the LAPD’s protest tactics.

The video they released shows officers complaining of rocks, bottles and other projectiles being lobbed at them near the intersection of Beverly Boulevard and Edinburgh Avenue. At one point, an officer tells a supervisor that his ankle has been injured. At another point, the footage is slowed down show what appear to be water bottles being lobbed in the direction of police.

Jorge Gonzalez, an attorney for Rodas, accused the LAPD of releasing footage with little relevance to his client’s case in order to serve its own interests.

“They’re cherry-picking videos that corroborate the narrative they want to support,” Gonzalez said. “This video to me is a half-ass attempt to try to justify what they did.”

In her lawsuit, Rodas alleges she was trying to leave a protest in the Fairfax district on May 30 when she was shot in the face and lost consciousness. She was then driven to Cedars-Sinai Medical Center and rushed into surgery for a severe fracture to her right mandible, leaving two days later with a steel plate along her jawbone, she said.

The lawsuit, brought alongside Black Lives Matter-Los Angeles and other activist groups, included a picture of Rodas’ bloodied, gauze-filled mouth.

The LAPD is required to release footage in incidents in which officers hospitalize people, and has done so in a string of other cases in which protesters alleged they were badly wounded this summer. In one, a man standing still with his hands up was shot in the head with a projectile. In another, a man appears to kick an officer before he is shot in the groin with a projectile. In a third, a man has a protest sign ripped from his hands before he also is shot in the groin.

The video released in Rodas’ case Wednesday does not show her shooting in any way. Instead, it purports to show the circumstances as they existed in the area where Rodas was injured, at about the time she was injured — which her attorney said was about 7 p.m.

The LAPD said Wednesday that it has not concluded its investigation into Rodas’ shooting or made any conclusions as to the appropriateness of the actions of the officer or officers who may have been involved. Investigators are still reviewing body-worn and private video “in an attempt to corroborate the incident,” said Capt. Stacy Spell, an LAPD spokesman.

Gonzalez questioned why more officers at the scene — dozens can be seen in the video — weren’t wearing body cameras, even if some were detectives and other types of officers who aren’t normally issued cameras.

The LAPD has previously said that it was also investigating why some supervisors had told officers working the protests not to wear their cameras. That investigation is ongoing.

Gonzalez said that nothing in the video released justifies what happened to his client.

He said she was simply walking down the street with a couple of friends to leave the area, not in a crowd of people, when officers shot her in the face.

LAPD policy requires officers to use projectiles only on individual targets who represent a direct threat, and requires them to aim for the belt line and never for the head or face.

According to Rodas’ lawsuit, the wounds to her head and jaw left her unable to speak for 10 days after the incident and unable to eat any solid food for a week. Several weeks after the incident, she still had “screws in her gums and rubber bands to immobilize her jaw while the bones rejoin.”