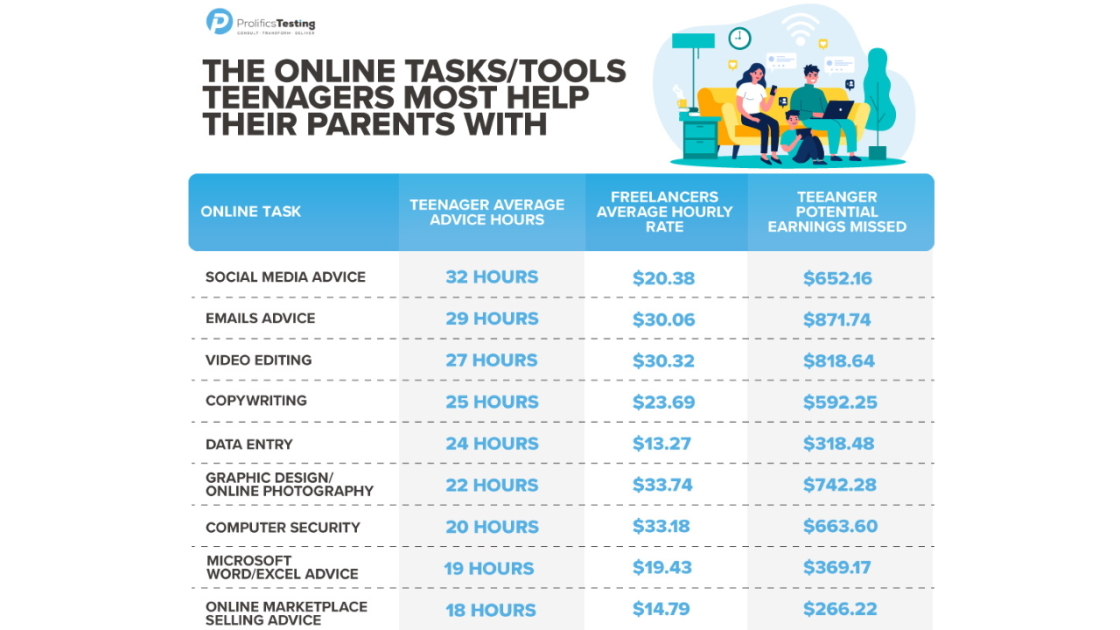 Are you a parent or guardian who is constantly turning to your teenage kids for advice on how to handle social media, email, video editing, security issues, and even full-on graphic design (someone’s got to make the flyer for the bake sale!)? If so, be glad you don’t have to pay for that. Or on average, you’d be shelling out $5,294.54 per year.

In a bit of research undertaken by UK-based specialist IT consultancy Prolifics Testing, it asked 2,664 teens (also in the UK) between 13 and 18 years old how many hours they’ve spent helping parents with various tech tasks in the 12 months between September 2019 and August 2020. Prolifics took the average number of hours and multiplied it by the freelancer rates listed in the job database at UpWork. The result, above, shows how much the kids could have earned if they were paid the same as a pro.

Most parents need help with social media (32 hours worth!), and email problems come second (29 hours). Strangely, video editing is third on the list, at 27 hours—must be all those parents trying to become Tiktok stars.

Copywriting (25 hours) is also correlated to social media, as it’s all about helping parents write posts and captions for services such as YouTube, Facebook, and Twitter as well as helping parents compose email messages. Shockingly, that pays even better than data entry (24 hours), the worst of the salaries listed. But the real money is in graphic design and online photography, which pays $33.74 an hour; kids were helping parents with 22 hours of that, on average.

To really hammer it home, Prolifics Testing also created a table showing the salary those kids would have made in a real job in those fields. Graphic design is still the big moneymaker, followed closely by computer security, but providing email advice and video editing isn’t a bad way to make a living either. (My free email advice: Stop sending “thank you” messages. You’re welcome.)

In other news, my kid starts learning Photoshop tomorrow.

In a release that Prolifics Testing issued with the charts, it noted some interesting stats from other questions it asked the teens—queries that are especially interesting with so many people now working from home. For example, 71 percent said they’d been asked by parents for tech help because the adult didn’t want to contact their employer or IT. Sixty-seven percent have helped set up a video conference meeting, such as with Skype or Zoom. Sixty-four percent had to help parents generate the invite link for those virtual meetings; 55 percent had to help parents turn the camera on and off for the meeting; 48 percent helped them do a conference call on a smartphone; and 40 percent assisted parents in learning to send a group SMS text.

You can read the full report here.