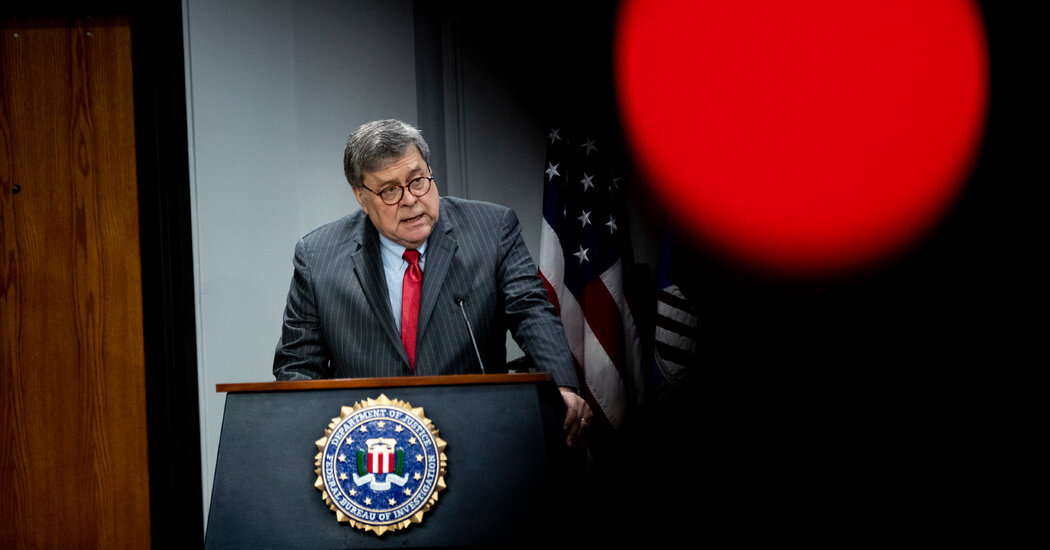 WASHINGTON — The Justice Department sent Congress draft legislation on Wednesday that would reduce a legal shield for platforms like Facebook and YouTube, in the latest effort by the Trump administration to revisit the law as the president claims those companies are slanted against conservative voices.

The original law, Section 230 of the Communications Decency Act, makes it difficult to sue online platforms over the content they host or the way they moderate it. Under the proposed changes, technology platforms that purposely facilitate “harmful criminal activity” would not receive the protections, the department said. Platforms that allow “known criminal content” to stay up once they know it exists would lose the protections for that content.

Attorney General William P. Barr, in a statement, urged lawmakers to “begin to hold online platforms accountable both when they unlawfully censor speech and when they knowingly facilitate egregious criminal activity online.” (While they are shielded from some civil lawsuits, online services are not protected from federal criminal liability by Section 230.)

President Trump and his allies have made criticism of major tech platforms a regular talking point in his campaign for re-election, attacking the firms over anecdotal examples of the removal of conservative content from online platforms. The companies have denied that political bias plays a role in removing posts, photos and videos.

On Wednesday, the president met with Republican state attorneys general to discuss “social media censorship,” said the association that works on behalf of Republican attorneys general. In May, Mr. Trump issued an executive order meant to push some federal agencies to make changes to the law.

“In recent years, a small group of powerful technology platforms have tightened their grip over commerce and communications in America,” Mr. Trump said at the event.

The legislation proposed by the Justice Department on Wednesday, which grew out of recommendations the agency made this year, seems unlikely to move forward in the coming months. The pace of Congress tends to slow ahead of Election Day, and the Senate is staring down a heated confirmation battle for a new Supreme Court justice.

The draft legislation also includes language that is meant to limit the circumstances under which platforms are protected for moderating content, changes that could lead to the platforms assuming legal liability for taking down certain political speech.

But there is a growing group of critics who say Section 230 has allowed Silicon Valley to get away with taking a dangerous hands-off approach to social media. Joseph R. Biden Jr., the Democratic presidential nominee, has said it should be “revoked.” Lawmakers from both parties have introduced measures that would modify the protections, though none have gained real traction in Congress.

In 2018, Congress modified Section 230 so that the protections did not cover platforms that knowingly facilitated sex trafficking. Proponents of that change say it tamped down trafficking online. But critics say the change made it harder for sex workers to safely vet potential clients, putting them at greater risk.

Online platforms and their representatives in Washington say Section 230 has played a vital role in allowing free speech to flourish online and has been integral to Silicon Valley’s rapid growth. Without the protections, they say, it would be impossible to sustain the scale of the internet economy. They also point to Section 230’s protections for how content is moderated to argue that the law is what allows them to police their platforms.

“This is not about stopping crimes; it’s about advancing political interests,” said Carl Szabo, the vice president of NetChoice, a trade group that represents Google and Facebook. “We’re essentially turning over to the courts an incredible amount of power to decide what is and is not appropriate for people who go on the internet.”

But despite the accusations of censorship on the right, conservative publications and figures regularly dominate the rankings of high-performing posts on Facebook and have built dedicated followings on video platforms like YouTube.

In late May, not long after Twitter fact-checked his tweets for the first time, Mr. Trump signed an executive order that asked the Commerce Department to petition the Federal Communications Commission to limit the scope of Section 230. A couple of months later, the Commerce Department submitted its petition, asking the F.C.C. to find that a platform is not protected when it moderates or highlights user content based on a “reasonably discernible viewpoint or message, without having been prompted to, asked to or searched for by the user.”