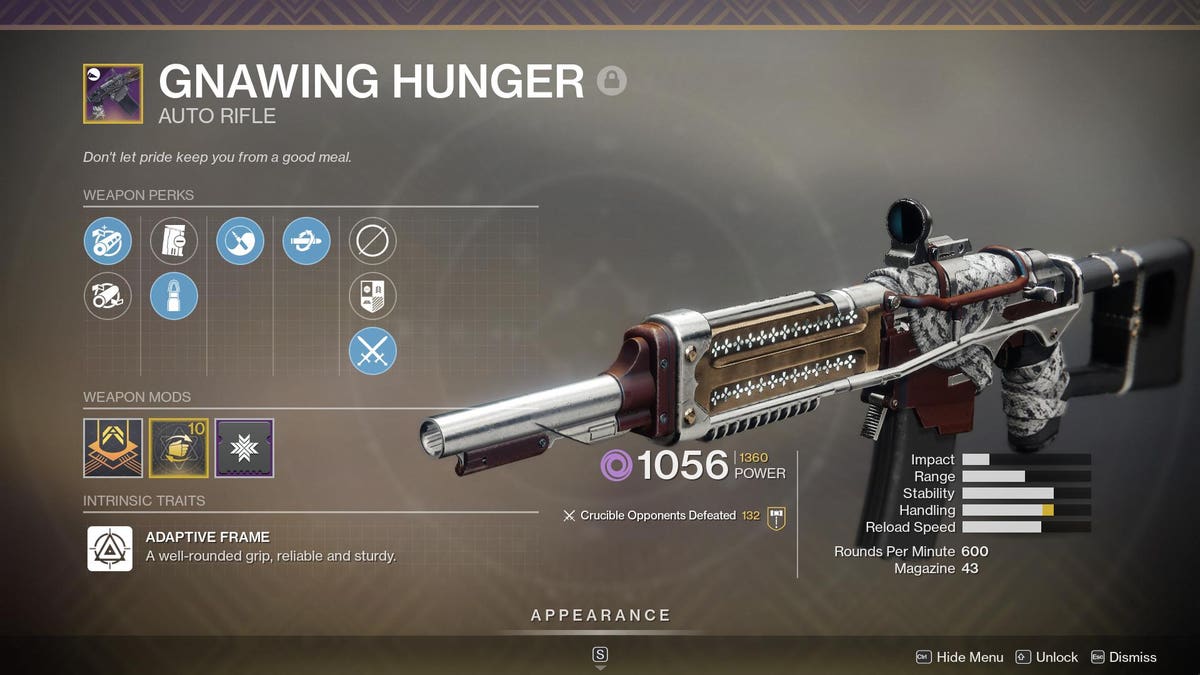 We are creeping closer to the launch of Beyond Light in Destiny 2, and let’s just all pretend like it wasn’t originally supposed to come out in just a few days so we don’t get too sad. And while many new things coming in Beyond Light sound cool (new Triumph system! Ghosts 2.0!), other things…not so much.

Namely, we have yet to really see anything from Bungie that justifies or better explains sunsetting going forward, and what new information we have seen, only seems to reinforce the narrative that sunsetting isn’t going to feel great or help the game as much as Bungie claims.

First, there are things like the world loot pool.

In Season of Arrivals, we have now gotten this shared world loot pool full of old and “reissued” guns that are now dropping at a higher power cap. The problem? These guns are not meaningfully different from their old counterparts in any way other than the new power cap. This has created situations like players being asked to re-earn the exact same roll of Gnawing Hunger or Night Watch that they’ve already been using, just so it can continue to be used in future power-enabled content.

This was one of the core fears about sunsetting, that it would turn into us just sharding most of our vaults and then having to re-earn the exact same copies of our old gear again (also known as the every-three-months routine in Borderlands 3). What I think Bungie should be doing now is explaining what weapons are going to be in the world loot pool next time around, and given that they will likely all be reprisals, show us that at least they’re changing in some ways.

If Bygones, returns, for instance, am I going to be getting the exact same copy of the weapon that I had before? Or is Bungie at least going to start throwing new perks on old weapons, as in, my Bygones can now roll with Feeding Frenzy or Vorpal or something. That may not be a perfect solution to the problem, but it would be something, and make it feel like at least I’m not re-earning the exact same weapon. But so far with reissued weapons, we have not seen those type of changes at all.

The second half of this is pinnacle/ritual/pursuit/please-stop-renaming-these weapons.

Players were not amused when they saw that the shared pursuit weapon for next season was literally Beloved, wrapped in a scarf and renamed Adored. Granted, it’s possible that the similarities to Beloved are simply cosmetic, and yet it was a bad moment to debut something like that with everyone already skeptical of sunsetting. And here we are, with the next pinnacle weapon being surprise, a much-loved sniper rifle that just got sunset.

In this case yes, I would assume this will feel different and have different perks offered than Beloved, but this leads me to another point Bungie made about being able to make more powerful, unique weapons once sunsetting took effect. I can’t remember the exact team member who said this, but the example given was that Bungie would be able to make more weapons like Recluse, stomping all over everything, without worrying about the power level too much, thanks to sunsetting rendering it irrelevant for endgame content in a year. But we have yet to be shown any examples of that, and Beloved just looks like another Buzzard/Komodo-style Ritual weapon with existing perks we pick, most likely, rather than something like Recluse or Revoker or Mountaintop that’s truly unique and powerful. If that isn’t true, Bungie needs to show us.

I suppose it’s possible that the truly powerful weapons from Beyond Light could end up being the raid weapons, and I wouldn’t expect Bungie to show those off early. One common complaint has been for years now that raid weapons have suffered compared to their world drop counterparts that are much easier to get, so if there’s a place Bungie is going to start taking advantage of sunsetting, it might be there. But again, I think we need a few morsels to reassure us that yeah, sunsetting is actually making the game better and no, we are not just going to be re-earning everything we used to have in the exact same form. Because right now, that’s definitely how it feels.