Is the California we knew and loved up in smoke for good? 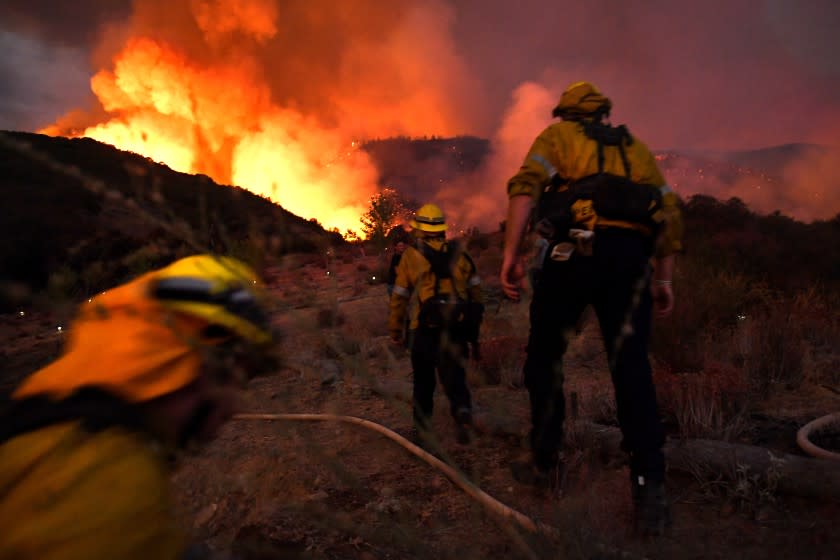 It’s another apocalyptic summer of record heat and unchecked, monster infernos in California. The death toll from it all had topped 20 by Friday and some of the biggest blazes in state history were still raging out of control, with strong winds at their backs. In Southern California, you can taste the acrid, smoky air, but you can’t see through it. The worst smog in 26 years was recorded in downtown Los Angeles a few days ago.

And we’re still a ways off from traditional fire season.

As with our oppressive pandemic gloom, we can tell ourselves that this, too, shall pass. But it’s harder than ever to believe it, and easier to wonder if it’s already too late for California to avoid these annual cycles of devastation.

And it’s partly our own fault.

When you have so many people living tight up against combustible open spaces, after decades of planning and regulatory debacles, it doesn’t matter how many turbines, solar panels and Teslas you have. The state is in some ways built to burn, and climate change is putting a match to the kindling.

No one understands that better than retired climatologist Bill Patzert, who spent decades at the Jet Propulsion Laboratory studying and warning the public about the impact of climate change. When I caught up with him on Friday to ask what he makes of our current troubles, he had troubles of his own.

He had a bag packed and his car was parked facing the street, in case the Bobcat fire burning in the San Gabriels turned his way and he had to make a quick getaway.

Patzert’s research focused on the solar system, the atmosphere and the oceans. He became a go-to expert on weather patterns such as El Niño and La Niña, and the relationship between sea level rise — another great threat to millions of people and jobs in California — and global warming.

In January, over a cup of coffee in Sierra Madre, Patzert told me we were closing in on a time when it wouldn’t be uncommon for the temperature to hit 115 degrees in Pasadena.

No surprise, I thought to myself. Given the way records have fallen each year across the state, that could be possible a few years down the road.

With all the heat and heavy smoke, it’s been nice to have masks at the ready. But through the dirty orange air of dusk, if you were to venture outdoors, you might prefer one of those goggled, snouted gas masks people wore a half century ago for the smog. In old photos, it looks like aardvarks roamed city streets.

“Look, we’re living in a warmer world,” Patzert told me Friday in a tone of utter inevitability. “Especially in Southern California.”

Patzert gave me a refresher on the concept of heat islands, noting the massive migration of people to California in the last half of the 20th century from the Midwest and East Coast.

“We’ve created this essentially 20-million-person megalopolis which creates its own heat, especially in summertime,” Patzert said. The heat is generated by housing developments, air conditioners and miles of asphalt traveled by millions of vehicles. “So the average temperature is about eight to nine degrees higher than it was in the early part of the 20th century.”

I asked him, hopefully, whether perhaps we’ve plateaued.

“It’s just the opposite,” he said, predicting annual record-setting temperatures as the new normal.

Growth was, for decades, a strength in California. People came for work and weather, they contributed, the state grew into the world’s fifth-largest economy. It’s understandable that more and more people wanted a piece of the dream, and to be generous, it’s understandable that towns and cities wanted to accommodate them.

But sprawl meant danger, and when Patzert looks at a map of California, he sees far too many people living in unsafe areas, in houses built with materials not designed to withstand fire.

“California has always had fire, it’s a natural part of the ecosystem,” Patzert said. “But in Northern California especially, so many people have moved” too close to dangerous wilderness areas, with communities such as Paradise paying with the lives of its residents.

In Southern California, Patzert said, massive communities have been built in corridors known for Santa Ana winds, which are even deadlier in drought cycles, when vegetation is as combustible as gasoline.

“You’ve got one big wind corridor all the way from Palmdale to Oxnard,” Patzert said.

“Another aspect is that 16 out of the last 20 years we’ve had below-normal rainfall in Southern California. So by the end of summer, we’re set up for fire. And as you know, Ventura County in the 1970s had only 125,000 people and now it’s almost 900,000. San Diego’s population has grown since the ’50s by a factor of six, and average rainfall there is 10 inches.”

More people and less water don’t do much for dreams of a sustainable future, whether you’re talking about drinking water or irrigation. When I set out a couple of months ago to research the impact of climate change on California’s $40-billion wine industry, Jason Haas of Tablas Creek Vineyard told me water tables in the Paso Robles area are being depleted, making it all the more important to develop dry-farming techniques.

Daniele Zaccaria, a water management specialist at UC Davis, said growers of all crops are wrestling with the unpredictable weather — too cold or too hot, too wet or too dry — that is associated with climate change.

“We’re seeing extreme swings from one year to another, and it’s visible in both temperature and the amount of water available,” said Zaccaria, who thinks farmers have to retool to get by with less water and accept that annual yields might fluctuate.

I was in Malibu last weekend, expecting a break in the heat, and the temperature was in the 90s.

I got home, 20 miles inland, to find that 114 degrees will burn the leaves of your avocado tree to a crisp.

Weather is not climate, but the changes in its patterns over time are frightening. Can California turn it around? I don’t know, but is there any option other than to try?

We all need to think about how we live, what we consume and how we get around.

Any more development in high-risk fire zones has to be treated as a criminal act.

Another crime, at a time when climate change deniers have risen to power, would be to forget the most important thing anyone can do.