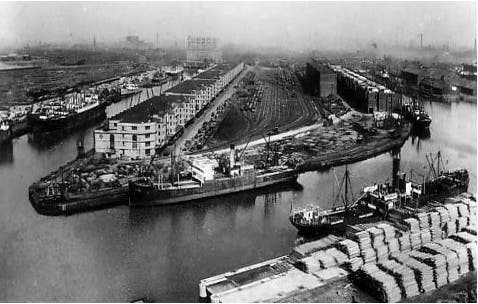 This second piece of a 5-article series, adapted from a speech I gave at a BritishAmerican Business virtual conference in September 2020, discusses raising standards and creating jobs by reinvigorating cities and building affordable housing. In the speech, I talked about the concept of Inclusive Capitalism and how, put into action, it can penetrate all areas of society. Other areas of inquiry included the importance of collaboration and research in education and technology, a proposed rethink of GDP metrics, and a call to use the pandemic shutdown as a chance for reflection and wise, sustainable investment.

I never tire of looking at these before-and-after photos of Salford—a comeback story of urban regeneration, and a genuine example of the power of Inclusive Capitalism.  As you can see, in the early 1900s Salford was a dockyard, serving proudly as the gateway to supplying Manchester’s industrial revolution at a time when Manchester had the highest per capita income of any city in the world. Back then, Salford Docks employed about 5,000 people in the low-skill, low-pay work of moving goods between Manchester and the outside world.

By the 1980s, the Docks had closed, leaving this same tract of land devoid of jobs: no skills, no pay. By this time Salford had suffered from decades of de-industrialization, with fewer and fewer jobs until there were practically none. By the mid-1980s, in one of the areas around Salford, unemployment was chronic at over 30 percent.

In the past decade, Salford’s fortunes have changed materially. Like many areas in the U.K., we thought that this area was not overbuilt, but under-demolished: massive sections needing to be changed. I begin with this example of our approach of Inclusive Capitalism: our investment in Salford and Greater Manchester was nearly $4 billion. What this investment has done is help to generate lots of modern industry in the form of digital hub full of high-skilled, high-paying jobs. There are 25 times more jobs today than there were in Salford Docks a century ago. Today unemployment in Salford is less than 5 percent, about the national average and well below its historic lows.

We’ve taken the Salford story on the road in the U.K., and in fifteen individual cities have invested between $640 million and $5 billion in revitalizing them. Our list includes Glasgow, Edinburgh, Newcastle, Leeds, Manchester, Birmingham, Bristol, Bath, Cardiff, Oxford, Cambridge, Belfast, Sheffield, Sunderland, and Liverpool. Each place is also benefitting from a local social multiplier effect, a knock-on, virtuous cycle of jobs, housing, retail and related economic activity.

In the process of working with these towns and cities, we’re also investing in startups to help them scale up. There’s an interesting dichotomy in the U.K. wherein it as been brilliant at start-ups and a laggard in  scale-ups—somehow, they run out of steam (or investment capital) before things get really interesting. So we’ve been working on filling that gap, particularly with venture capital. We see this as answering to other facets of inclusive capitalism—creating new initiatives and striving to break the cycle of intergenerational inequality. So far we’ve invested in over 300 firms. This is what good growth looks like: real new assets creating real new jobs that pay real and high-quality wages.

Inclusive capitalism, the idea of investing for high return both financially and socially, has transformed Salford and these other cities. But there could be many, many more ‘Phoenix Cities’ just like it: so in the U.S., with a similar approach to investing and revitalizing, Salford could be Syracuse; and Cardiff, another of our projects, could be Cleveland; Leeds could be Lansing.

But in the U.K. we see certain areas where the externalities are so great, and the lack of infrastructure, education, or even the state of the population is so dire, that it’ll take more than the efforts of government to resurrect them. One aspect of Inclusive Capitalism is that it’s capitalism, not philanthropy: we have to be able to show, over the long-term horizon, that there are returns. But whether you’re talking about the U.K. or the U.S., some areas have been so neglected that it will take a resolute, highly focused public-private partnership to bring them back. But in bringing them back, there will be return – as I’ve mentioned before, it shouldn’t be thought of as a cost center, rather a profit center that once productive, will yield dividends.

Housing is another such example of the potential to create return while providing a social benefit, and where government needs private industry to fill in the gap. In 1981, there were 5.5 million publicly subsidized homes for rent in the U.K. At that time, the government spent just over a billion pounds ($1.28 billion) on housing benefits. In fact, Margaret Thatcher had promised that this housing benefit would never become more than a billion pounds. Rolling forward to 2020, there are less than 4 million houses now in the sector, and we spend approximately $32 billion on housing benefits. In the mid-1960s, we built over 200,000 public sector houses. In the mid-1970s, it was about 150,000 per year. Now the level is down to 5,000. As a result, there is a waiting list of over one million people looking for housing.

Some of this public housing, called Council houses in the U.K., made Margaret Thatcher very famous and very popular. The sale of these homes to their occupants at a discount was a political and economic success for Prime Minister Thatcher. But not replacing them was the mistake. To address this, we at Legal & General, and others as well, are revolutionizing the ownership model by creating and investing billions into new asset classes which match the needs of long-term, institutional, patient capital, ‘patient’ referring to periods of 10, 20, 30, 40, 50 years, or even longer.

So we’re building affordable homes, and want those businesses in the building sector—including cutting edge, eco-friendly, modular housing companies—to scale up many, many more and better affordable homes. Better later life living homes, better built rentals, better care homes, better science and technology facilities. And many of these will be operating at net-zero carbon.

We’re looking to invest another $28 billion or so to invest in U.K. cities, we believe there are many innovative and inclusive ways it can be done, and that a similar approach can be taken in the U.S. Interestingly, our Inclusive Capitalism approach has proven quite resilient in the face of COVID: we’ve definitely got more ambition today than we had 9 months ago, which runs contrary to many other investors.

This alignment we’re seeing among businesses and government, and also getting people to physically see what you’ve done, is much more emotionally gratifying than the customary experience of working in financial services. Seeing those pictures I showed earlier, which could be equally substituted with pictures of many other cities where we’ve invested, reminds me that Inclusive Capitalism is a way to change hearts and minds. We took our board members to visit Salford and Leeds and Cardiff, to see the transformation. I think that literally and physically getting involved—leaving their desks, donning hard hats, splashing around in the mud as we visited the sites—really brought it to life.

Because our projects are addressing widespread and timely needs, we’ve been able to attract in quite a lot of accessible capital, and there seem to be even more opportunities now than there were before the pandemic. This may be because technology has made about three years of progress in six months—there have been tremendous advances in life sciences, digital communications and telecommunications, among many other areas. There is also a willingness of people to lean in, to add their expertise as well as their ideas and opinions, to collaborate. The speed at which we’ve been able to get things done in Oxford, Sunderland and Sheffield has quickened, resulting in better later life living, better research facilities and accommodations, better living in general. Where you have a well-defined purpose, culture, behavior, and strategy all aligned, it becomes much easier to get these projects done.

The next article will address more in depth the inclusive capitalism imperative to forge bold, constructive collaborations.