In Mayo’s hometown, DFLers look to put science, and Trump’s response to COVID-19, on the ballot 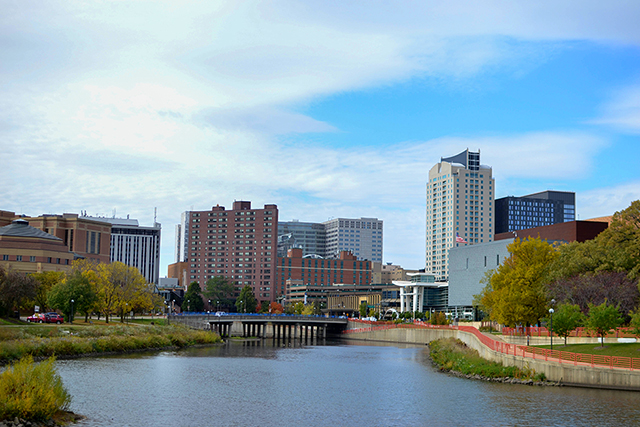 For Republicans in key state Senate races across Greater Minnesota, running alongside Donald Trump could be an asset given the president’s strength outside of the Twin Cities metro area. So much so that Democrats in places like Moorhead, Bemidji and St. Cloud haven’t put the president front and center in their races.

In Senate District 26, which includes much of Med City and a more rural slice of Olmsted County, Democrat and retired Mayo Clinic doctor Aleta Borrud hopes to tie three-term Republican Sen. Carla Nelson to Trump — and particularly to the president’s handling of the COVID-19 pandemic. It’s a bet that the district, home to Mayo and a legion of medical professionals, opposes Trump and the GOP’s response to the coronavirus enough that they will oust Nelson in the Nov. 3 election.

“Somebody who is supporting and allying with somebody who is anti-science really speaks for this community?” Borrud said. “Our whole economy is based on science.”

Nelson, who has been a powerful lawmaker in St. Paul and carries a record of bipartisan accomplishments, said her record and focus on local issues will win over voters, especially as the Legislature faces a likely budget deficit in the 2021 session.

Why a longtime GOP incumbent may be vulnerable

At the Capitol, Nelson chairs the Senate’s E-12 Finance and Policy Committee, which oversees the massive K-12 schools budget. She also has a hand in writing health care policy and the bonding bill, which pays for construction projects.

Nelson was the first lawmaker to propose raising the legal age to buy tobacco from 18 to 21 in 2017, a policy that was approved by the Legislature this year. In 2020, she championed a new law aimed at increasing access to clinical trials for people on Medicaid.

“I have delivered historic funding for our schools,” Nelson said.

Nelson also touts a long list of Rochester projects she helped secure money for, including a new building for the Reading Center, which helps people with dyslexia learn to read, and upgrades to the airport and Rochester Community and Technical College.

Nelson is a former public school teacher in Rochester and is considered one of the more moderate members of the Republican-led Senate. As of 2019, Nelson had the lowest lifetime voting rating by the American Conservative Union Foundation of any sitting GOP senator, though her recent ratings are higher.

Nelson was first elected to the Legislature in 2002, winning a state House seat that she held for one term. She was then elected to the state Senate in 2010 and 2012, and won her 2016 Senate race by a 12-point margin. That far outpaced Trump, who led in the district by an ultra-slim 315 votes.

Despite Nelson’s role at the Legislature and her electoral success, Democrats have targeted Nelson’s seat this year in an effort to flip the GOP’s 35-32 Senate majority. DFLers hold a majority in the state House.

The two parties and their allies have spent a significant amount of money on the race so far, making it among the most expensive Senate races in Greater Minnesota. And there is reason to believe the election will be close. In 2018, the DFL won more votes than Republicans in Nelson’s district in two U.S. Senate races, the gubernatorial election, and the U.S. House race between Jim Hagedorn and Dan Feehan.

Senate District 25, which also includes part of Rochester, features another competitive race between Republican Sen. David Senjem and Democrat Sara Flick, though it is a more conservative-leaning district and state DFLers appear to have put a heavier focus on Nelson’s race in SD 26.

Borrud, when asked why she could unseat Nelson, immediately turned to Trump.

In 2018, when Nelson lost a primary race for the U.S. House in southern Minnesota’s 1st Congressional District, she vocally backed Trump’s agenda along the way. That kind of allegiance enables the president’s response to the coronavirus, said Borrud, like his resistance to wearing masks to limit the spread of the disease, and his recent comments in Minnesota bashing refugees. Both are out of step with Rochester’s medical community, and immigrant residents of East African descent, Borrud said. (Both candidates wore masks during outdoor interviews in Rochester on Tuesday.)

“This is not somebody who is standing up for the inclusion that I think Rochester not only aims for, but what we need in order to have the diverse workforce to bring talent from all over,” Borrud said. “You look at who are the scientists at Mayo Clinic, it’s a very profoundly diverse group of scientists and physicians.”

Nelson did not answer when asked about the president’s response to COVID-19 and his decision to hold a large rally in Duluth shortly before publicly announcing he had tested positive for coronavirus. She also declined to answer follow-up questions about the president’s comments toward refugees and whom she plans to vote for in 2020.

But in a statement, Nelson said she supports the “unprecedented economic growth, historically low minority unemployment, tax relief, restoration of our military and a Middle Eastern foreign policy so successful it has led to a Nobel Peace Prize nomination for actual peace agreements that we have seen under the Trump administration.”

“If my opponent wanted to run against President Trump she filed for the wrong seat,” Nelson said.

In the interview, Nelson pivoted to Gov. Tim Walz’s COVID-19 response. Nelson said she supported Walz assuming emergency powers early in the pandemic and touted the Legislature’s quick action to create a $200 million COVID-19 fund to buy personal protective equipment and ventilators. But she said the governor has made mistakes while operating independently of the Legislature, such as enacting one-size-fits-all health restrictions across the state, and should relinquish his emergency powers. Borrud said Walz’s powers should continue to give him the ability to move fast if the pandemic escalates during the winter, and she said the governor has properly used his powers to expedite production of resources and protect people from eviction.

Nelson also highlighted her advocacy for school districts to have a say in whether to hold in-person classes. “I am glad to say that the governor eventually took that approach,” she said.

More generally, Nelson said she is “focused very much on the state of Minnesota and on this district.”

“I don’t know that the president is that great of an impact on my race,” she said. “I’m a pretty well-known quantity.”

Split over the path forward in St. Paul

Still, the candidates have diverged over more than COVID-19 and Trump.

Borrud, a first-time candidate who left her Mayo job in 2016 for political organizing, said she would support the expansion of MinnesotaCare, a health insurance program for low-income people, so that residents can buy into the state coverage. Borrud said Minnesota should also put more money into K-12 education and take more action to close racial disparities in education. That includes spending more than Nelson agreed to in the 2019 budget for efforts to boost the number of teachers of color in schools.

Borrud said she supports the governor’s plan to require a carbon-free energy grid by 2050 and adopt California’s tougher auto emissions standards. She also supports a so-called “red flag” law, which would allow courts to take away firearms from people who are deemed a danger to themselves or others, and Borrud also wants to extend background check requirements to private gun sales.

Nelson does not support such an expansion of MinnesotaCare and instead backs other legislation aimed at reducing the cost of health care, such as allowing Minnesotans to import prescription drugs from Canada and increasing access to telemedicine.

She said the state may need to “take a very surgical look” at the state budget for cuts while a deficit looms or consider “what money doesn’t have to be spent right now.” For instance, Nelson noted, the state delayed payments to schools in 2011 to solve a budget crunch, though she said that should be a last resort, along with new taxes. Borrud said the state should consider raising taxes on corporations.

On environmental issues, Nelson said she supports a Republican version of a proposal known as “Clean Energy First” to require utility companies to add clean energy to its system when it needs to replace or increase power unless the carbon-free or renewable option would bring unreasonable costs or threaten the reliability of the power grid. Nelson also opposes the state’s efforts to adopt California-style auto emissions rules.

Borrud supports and Nelson opposes a state ban on conversion therapy, a practice widely discredited by health professionals in which people try to change an individual’s sexual orientation or gender identity. It has been banned in 20 states, and Rochester’s City Council passed a resolution in late September calling for a state ban. In a recent debate, Nelson said the decision should be left to the state’s medical boards, not lawmakers.

Borrud’s campaign has been boosted by advertising and support from Planned Parenthood, environmental groups and organizations that support new gun restrictions, including Mike Bloomberg’s Everytown for Gun Safety. Nelson is endorsed by the National Rifle Association, the Minnesota Police and Peace Officers Association and the Minnesota Chamber of Commerce.

One group that was notable — particularly in a place home to one of the world’s most famous medical centers — for not making an endorsement was MEDPAC, the campaign arm of the physicians’ trade group Minnesota Medical Association. The MMA’s No. 1 priority in the 2020 session was raising the smoking age to 21, which is something Nelson championed. The group’s second priority was enacting gun restrictions like a red flag law and expanded background checks, which are things Borrud supports.

Eric Dick, executive director of MEDPAC, said the organization worked closely with Nelson on the tobacco issue and other legislation. The group also endorsed Nelson in past elections. “However, the board chose not to endorse her in this cycle because there is a physician candidate in the race,” Dick said in a statement. “As a result, our board felt it was best not to endorse either candidate.”