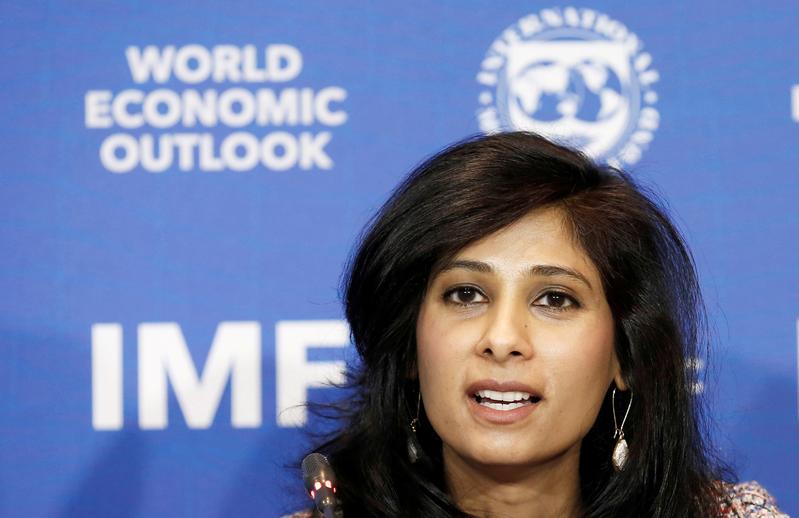 WASHINGTON (Reuters) – Forecasts for the global economy are “somewhat less dire” as rich nations and China have rebounded quicker than expected from coronavirus lockdowns, but the outlook for many emerging markets has worsened, the International Monetary Fund said on Tuesday.

The IMF forecast a 2020 global contraction of 4.4% in its latest World Economic Outlook, an improvement over a 5.2% contraction predicted in June, when pandemic-related business closures reached their peak.

The global economy will return to growth of 5.2% in 2021, the IMF said, but the rebound will be slightly weaker than forecast in June, partly due to the extreme difficulties for many emerging markets and a slowdown in the reopening of economies due to the continued spread of the virus.

Gita Gopinath, the IMF’s chief economist, said some $12 trillion in fiscal support and unprecedented monetary easing from governments and central banks had helped to limit the damage from the pandemic and support must be maintained.

Even then, ending the worst economic crisis since the Great Depression of the 1930s depends on conquering the virus, she said in a news conference.

“The virus is resurging with localized lockdowns being reinstituted,” Gopinath said. “Now, if this worsens and prospects for treatments and vaccines deteriorate, the toll on economic activity would be severe and likely amplified by severe financial market turmoil”

She warned of a divergent path between wealthier countries and China, which are recovering more quickly, and poorer countries that “are headed towards worse futures than advanced economies.”

The IMF predicted the United States will see a 4.3% contraction in its 2020 gross domestic product, considerably less severe than the 8% contraction forecast in June.

But the U.S. rebound next year will be somewhat weaker at 3.1% growth – a forecast that assumes no additional federal government aid beyond around $3 trillion approved by Congress in March.

The eurozone’s economy will shrink by 8.3% in 2020, an improvement from a 10.2% contraction predicted in June, but there is wide divergence within the group, the IMF said. Export powerhouse Germany will see a contraction of 6.0% this year, while Spain’s economy, more dependent on tourism, will contract 12.8%. The eurozone will resume growth of 5.2% in 2021, the IMF said.

China, which saw a strong early reopening and rebound from the pandemic, will be the only economy to show positive growth in 2020, of 1.9% – nearly double the rate predicted in June – and reach 8.2% growth in 2021, its highest rate in nearly a decade, the IMF said.

China, where the coronavirus first surfaced late last year, had reopened most of its economy by April and has seen strong demand for exports of its medical supplies and technology products needed to aid remote working, the IMF said.

But emerging markets other than China will see a contraction of 5.7% in 2020, worse than the 5.0% predicted in June. The IMF said the virus was continuing to spread in large countries including India and Indonesia, and those economies are far more dependent on hard-hit sectors including tourism and commodities as well as on remittances and other sources of external finance.

The IMF also said economic ‘scarring’ from job losses, bankruptcies, debt problems and lost schooling will hold back medium-term global growth after 2021 to about 3.5%, with a cumulative loss in output of up to $28 trillion from 2020 to 2025 compared to pre-pandemic growth paths.