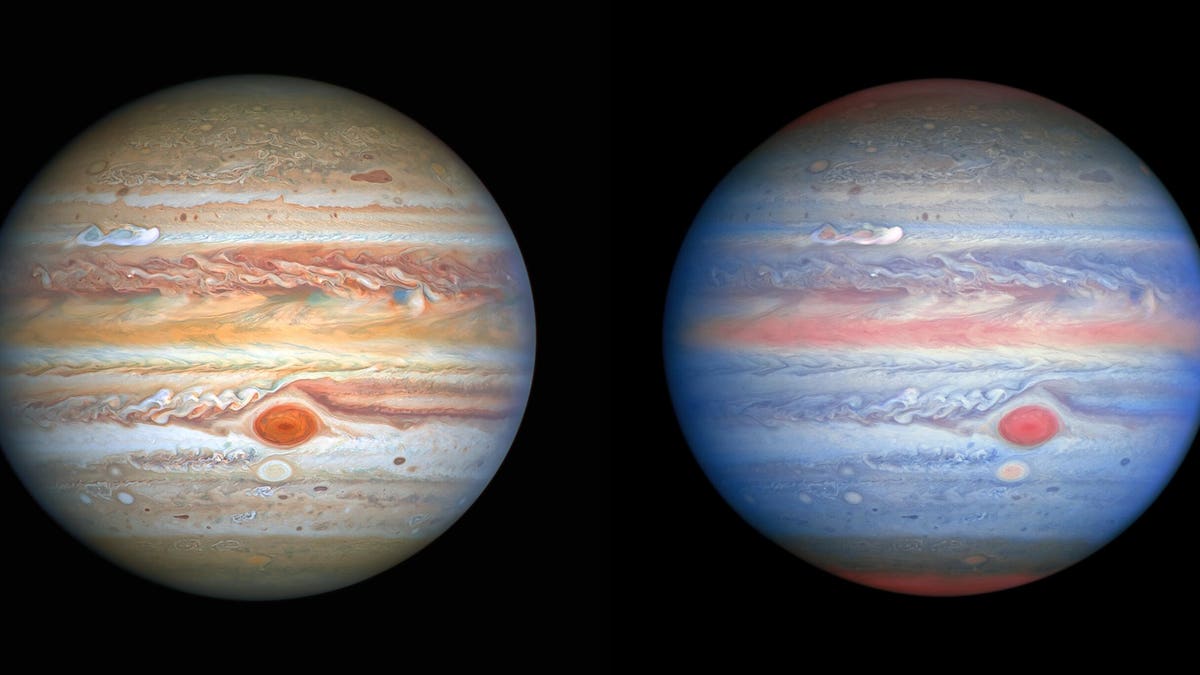 The image, below, was obtained from the Earth-orbiting space telescope on August 25, 2020 and is a combination of ultraviolet, visible and near-infrared light from Jupiter.

This unique panchromatic multi-wavelength image is helping scientists see where haze and particles are distributed on the gas giant.

What is that white storm in the rainbow image?

See those white plumes at the upper-left of the rainbow image above? It’s a new white storm that was first noticed on August 18, 2020. It only shows up in the “rainbow” image, and appears to be absorbing ultraviolet light. Its appearance is further proof that the “Great Red Spot”—obvious on the image’s lower-right—is a very unusual and long-lasting event.

What is the ‘Great Red Spot?’

A persistent high-pressure region that at twice the size of Earth is the Solar System’s largest storm. Situated 22º south of Jupiter’s equator, it’s been raging since at least the year 1830. Wind speeds can reach 425 mph/6880 kmh.

What are the reds and blues in the rainbow image?

See those reddish areas around Jupiter’s equator and poles? They look that way in the “rainbow” photo because of atmospheric particles—a kind of hydrocarbon smog—absorbing ultraviolet light. The blueness in between is caused by the ultraviolet light being reflected off Jupiter.

What is that storm below the ‘Great Red Spot?’

It’s “Red Spot Jr.” Captured when the planet was 653 million kilometres from Earth, Hubble’s sharp new visible light image, above, shows that new storm upper-left—just as the rainbow view does—but it also shows a storm below the Great Red Spot is changing color. Called Oval BA or “Red Spot Jr.” this storm in Jupiter’s southern hemisphere appears to be darkening to a reddish color again after more than a decade turning from red to white.

Jupiter’s icy moon Europa also features in the visible light image; look to the left of the giant planet. Europa is already thought to harbour a liquid ocean beneath its icy crust, which some think could host life. It’s one of the four giant Galilean moons of Jupiter alongside Ganymede—which is bigger than the planet Mercury—Callisto and Io. You can see all of them with any pair of binoculars tonight if you put them on Jupiter. The planet is in the southern sky after dark, as viewed from the northern hemisphere.

These new images are part of the Outer Planets Atmospheres Legacy programme (OPAL), an annual check-up on the storms, winds and clouds happening on the outer planets.