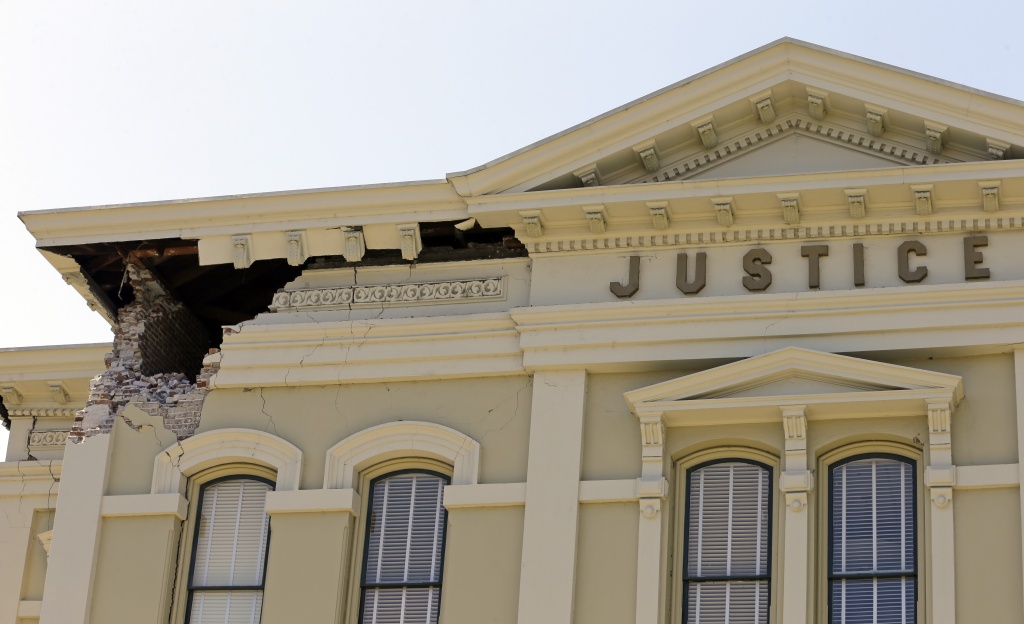 Some years before his public execution, William Roe convinced a friend to write a letter informing his family that he was dead.

According to that letter, Roe had been killed in a vague, accidental sort of way in the Black Hills. This was tragic for his family but exceedingly convenient for the career criminal, who was actually on the West Coast committing a series of misdeeds. Wanted by police, he decided faking his death in South Dakota was the best course of action for everyone.

Now nothing but a memory to his family, William Roe’s real, corporeal self began blazing a bloody trail across California. It was one particularly brutal murder that landed him in the Napa County Jail on the morning of Jan. 15, 1897, the day before the state of California was set to hang him by the neck until dead. Roe was at ease, chatting with reporters and sharing a letter he’d received from his sister.

“We are sorry that the news you sent us years ago that you had been killed was not true,” she wrote. “It was not so bad upon us to go into mourning for you as we did, thinking that you had died an honorable death, as it is now to learn that you must be executed for killing a human being.”

“You have been a bad man, dear brother,” she added, “but try to die a good one.”

“I do not see that it makes much difference how a man dies,” Roe shrugged. “It is all the same five minutes after he stops breathing.”

After cavorting with the media, Roe finalized his will. His brain would go to a teaching hospital — “There is something anatomically wrong in my makeup and I desire to aid science,” he wrote — and his bones would go to Napa’s most famous doctor, E.Z. Hennessey.

Roe slept uneasily that night, but he’d regained his characteristic aplomb by morning. Drunk off a quart of whiskey and mellowed out by a shot of morphine right above the heart, courtesy of the good doctor, Roe went to the gallows with a cigar in his mouth.

“There are a great many people who want to see a man die,” grinned William Roe as he stepped out before the crowd of 400 onlookers.

It took 18 minutes to kill the last man publicly executed in California, and six months more for the sun to bleach his bones white.

Three of Napa’s most famous ghosts are entangled in the murder at the Greenwood Mansion, one of the most ruthless crimes the town has ever seen.

The pretty white house on the road from Napa to Vallejo belonged to Capt. John Greenwood, a sea captain who arrived in California in 1849 and made his modest fortune in shipping. Now 60, he enjoyed a peaceful country life with his 46-year-old wife Lucina.

The sun was setting on Feb. 9, 1891, when Capt. Greenwood, outside chopping wood for the evening fire, was approached by two well-dressed gentlemen. The men asked if the captain had any employment for them. When he said no, they asked if they could come in for a meal. He again declined, saying his wife was away and there was no food prepared for them. Agitated, one of the men drew a revolver from his coat.

“Throw up your hands,” he ordered. “What we want is money.”

The robbers marched Greenwood into his house where they bound his hands and feet and forced an opiate down his throat to sedate him. As they ransacked the home, Lucina’s buggy approached on the drive. She had just reached the porch when she was assaulted by the robbers, who dragged her inside and subdued her as they’d done her husband. The Greenwoods slipped into unconsciousness.

Capt. Greenwood was awoken by the clock in the hall chiming 11 p.m. He stirred, drawing the attention of the men still in the house. Through his haze, he could see a man approach. Then, two shots were fired into his head. In the bedroom, he heard the bark of a single gunshot. The men left. In their pockets was the totality of their haul: $4.

The men were sure they’d left no witnesses, but they were wrong. Capt. Greenwood was still alive. For hours, he listened to the clock ticking. Finally, the sun rose. He managed to loosen the ties around his feet and crawled to find his wife. She was dead. Desperate, head and face covered in blood, he made his way, slowly, out of the house and 200 yards down to the main road. There, a neighbor found him and raised the alarm.

By the time police arrived, the road was packed with onlookers and reporters. People were traipsing through the house, Mrs. Greenwood’s body still on the bed. It was “a crime too horrible for belief,” the Napa Register wrote.

The murderers had a 10-hour head start on police, but Capt. Greenwood at least knew exactly what they looked like. One man was Swedish. The other was American, sporting a mustache, a “stylish” suit and appearing “like a drinking man.” Police discerned one of the men was wearing Greenwood’s boots. He’d swapped them for his pair, which he left behind because they were blood-soaked.

The viciousness of the crime had never before been seen in Napa County, and the state quickly raised an enormous reward of $4,500 (almost $130,000 today) for information leading to the capture of the fiends. But weeks turned to months and the case went cold.

The next year, a Swedish man named Carl Schmidt got drunk in Denver and told a bartender he’d once accompanied a man to a lovely home in Napa where he claimed they’d find the riches to restore both their fortunes. Instead, the house contained only $4 cash and the man shot the homeowners. Schmidt swore he’d gone in only for a robbery, not murder, and the crime weighed heavy on him.

The bartender, who clearly had no interest in keeping secrets, turned Schmidt in to the police. He was shipped off to California to stand trial, where he was sentenced to a life term in San Quentin. The accomplice was now in prison, but the killer roamed free.

For five more years, William Roe robbed and maimed and murdered. Then, boozing with a liquor salesman in Los Angeles, he too decided to unburden himself about the massacre at the Greenwood Mansion. Unfortunately for him, the salesman was an ex-U.S. Marshal.

But Roe, police soon found, didn’t mind getting caught. Once in custody, he happily confessed to 25 additional murders and then added he had three more people he’d like to kill if he had the chance. “I should never have been born,” Roe told reporters after his arrest. “If I was free, nobody’s life would be safe.”

He told prison guards he had planned on murdering them. But he decided to spare their lives because they’d been quite nice to him. The prospect of death shook him not at all, even as he listened to the gallows being constructed outside his prison cell. A phrenologist was allowed to examine him. Roe’s head shape wasn’t the root of his criminality, the phrenologist decided. He was “simply a moral monstrosity.”

Roe agreed. On the day of his death, he marveled at his smooth, steady pulse — asking Dr. Hennessey to feel how calm his heart rate was — and ordered the assembled group of reporters to stare into his uncanny eyes.

“I have often become afraid of myself when looking at the reflection of my own eyes,” he mused.

As he was escorted to his death, Roe cheerfully shook the hand of every drunk and petty thief in the county lockup, blowing billowing clouds of cigar smoke. Once in front of the crowd — including Capt. Greenwood — he bowed his head to meet his bound hands, pulling the cigar stump from his mouth. He tossed it into the crowd, where a dozen men shoved forward for the macabre souvenir. Roe gave them one last look of disdain.

Napa County Sheriff George McKenzie, who’d made it his mission to solve the Greenwood case, looped the noose around Roe’s neck.

“See that you pull the rope tight, Sheriff,” Roe said. And then he fell.

That day, Roe’s body was packed up and taken by train to San Francisco. There, in front of 98 male and two female students, it was dissected. With the typical racism of the age, doctors declared nothing in Roe’s anatomy pointed to insanity. His bloodlust must be endemic to his Native American roots.

“The strain of Cherokee and Comanche blood in Roe’s veins was sufficient to make him as treacherous as the most savage Apache,” one doctor said.

His desire to advance the science of homicide completely unfulfilled, Roe’s body was again packed up and shipped out — this time back to Napa. There, it was gifted to Dr. Hennessey, whose family name today graces the nearby lake. The local papers reported that he planned on cleaning Roe’s skeleton and adding it to his “anatomical collection.”

Unbeknownst to Napa’s citizens, the bones went up on the roof of the Williams-Kyser building — today the home of Cole’s Chop House — on Main Street. For six months, people came and went, doing their shopping while up above, William Roe’s bones bleached in the warm California sunshine.

“It is not generally known that for the past six months the bones of Wm. Roe, who was hanged here on January 15th of last year, have been bleaching on top of the Williams stone block,” the Napa Daily Journal reported in January 1898. “Now let the superstitious ones beware; the goblins’ll get ‘em if they don’t watch out.”

Local legend says Roe’s skeleton found its way to the Napa High science department but, as best anyone knows, it disappeared in the 1960s.

Those looking for ghostly remnants of the Greenwood episode may wish to visit two locations. The first is Greenwood Mansion, which still looks much as it did in 1890. The historic home near Napa County Airport is today owned by a winery, which recently proposed opening it to the public with a cafe. The ghosts of John and Lucina Greenwood are said to haunt its halls, hopefully ready to enjoy coffee with a visitor or two.

The other location is the Napa County Courthouse on Brown Street. Its lawn was the site of Roe’s execution — and the gallows were reportedly taken apart and stored in the building. For over a century, workers have reported seeing Roe’s angry ghost stalking the building and the grounds.

Roe, it should be said, wasn’t a big believer in ghosts himself. The day before his death, he was asked if he ever felt followed by the souls of his victims.

“If you mean did I ever see any ghosts, no I never did,” he replied. “I guess the spirits of my victims had more important things to think about than haunting me.”