How Old Is This Ancient Vision of the Stars? 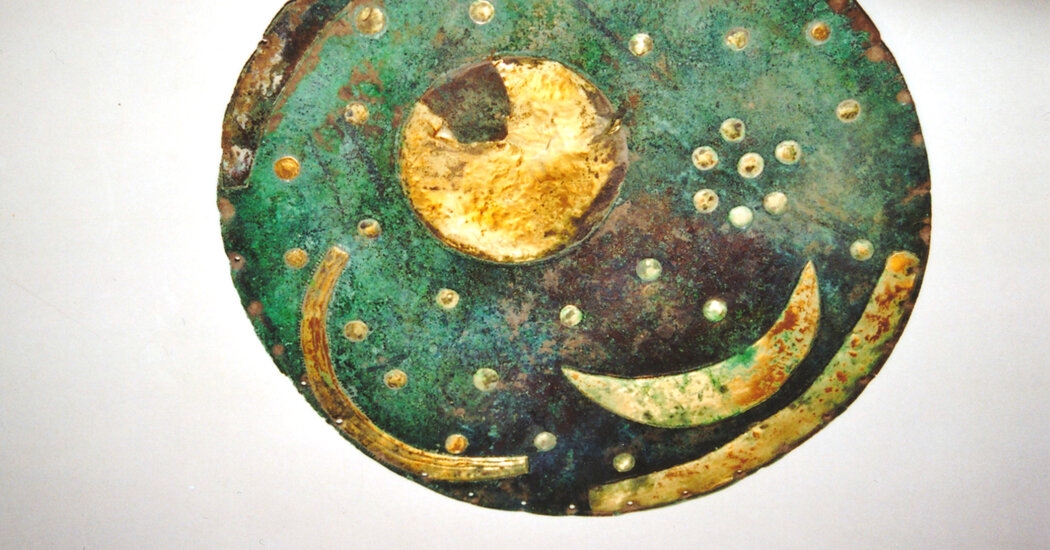 The Nebra sky disk has been hailed as the oldest known representation of the cosmos. Uncovered by looters in 1999 and then recovered in a sting by archaeologists and law enforcement a few years later, the ancient bronze artifact, inlaid with gold decorations of the night sky, has provoked heated debates.

Now, a pair of German archaeologists are calling into question the age and origin of the disk, adding another chapter to the complex saga of the enchanting object.

The disk is currently judged to be about 3,600 years old, dating it to the Bronze Age. The looters who initially uncovered it said it was buried on a hilltop near the town of Nebra in Germany, next to weapons from the same era.

Rupert Gebhard, director of the Bavarian State Archaeological Collection in Munich, and Rüdiger Krause, a professor of early European history at Goethe University Frankfurt, now propose that the disk is a product of the Iron Age, which would make it about 1,000 years younger.

The researchers also argue that the disk was most likely moved by looters to the Nebra site from another location, meaning it may not be associated with the other artifacts, or Nebra itself, according to a study published this month in the journal Archäologische Informationen.

“We regard the disk as a single find, as a single artifact, because nothing fits to it in the surrounding area,” Dr. Krause said.

The State Museum of Prehistory in Halle, Germany, which exhibits the Nebra sky disk, issued a statement calling the team’s conclusions “demonstrably incorrect” and “easily refuted.”

“The biggest mistake in science is if you don’t refer to the whole data,” said Harald Meller, the museum’s director. “What these colleagues do is refer only to very limited data that seems to fit their system.”

The artifact is thought to be affiliated with the Bronze Age items in part because soil on the objects indicated a common period, but the study points to conflicting court documents about those assessments. Some of the weapons associated with the disk may not date to the Bronze Age, or come from the same deposit, according to Dr. Gebhard and Dr. Krause.

The researchers suspect that the original looters may have moved the artifacts to the Nebra location to keep their site a secret from professional archaeologists.

“They never tell you the place where they excavated because it is like a treasure box for them,” Dr. Gebhard said. “They just go back to the same place to get, and sell, new material.”

Disputes about the authenticity of the Nebra sky disk are not uncommon. Its spectacular design has awed both experts and the public, but it has also provoked concerns that it could be a forgery.

“The problem here is that it’s such a one-off,” said Alison Sheridan, former president of the Prehistoric Society, who is not involved with either team. “That’s why people have said, Maybe it’s a fake.”

Emilia Pásztor, an archaeologist at the Türr István museum in Hungary who has studied the disk, noted that its black market background amplifies these uncertainties.

“The Nebra disk, due to the circumstances of the discovery,” she said, “belongs to those archaeological finds that can be debated forever until some very accurate absolute dating method can be found for metals.”

Still, there is now a strong consensus that the Nebra sky disk is a bona fide ancient artifact.

“It’s original. It’s not a fake,” Dr. Krause said of the disk. “What you can make out of it is a very interesting scientific discussion that shows the various different sides, or objectives, of how to judge this object, either in the Bronze or in the Iron Age.”

To that end, Dr. Meller’s team intends to publish a rebuttal of the new study. Other archaeologists think they will have plenty to work with.

“What’s been presented here certainly does not blow out of the water the argument that it’s Bronze Age,” Dr. Sheridan of the new study.