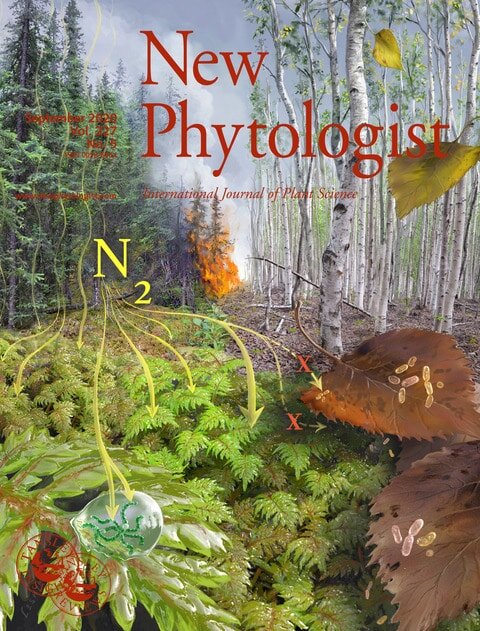 Mosses and their microbial partners are important players in fertilizing the boreal forests that make up nearly a third of all Earth’s forests. But climate may be changing mosses’ role in how these forests access nutrients, according to a new study led by the Center for Ecosystem Science and Society (Ecoss) at Northern Arizona University and the University of Saskatchewan.

Their findings, reported in this month’s New Phytologist with cover art by Ecoss’ Victor Leshyk, illumine invisible connections between trees and the dynamic understory of mosses and microbes that help govern their growth. By transplanting cores of moss between deciduous (Alaska birch) and coniferous (black spruce) stands, and manipulating leaf litter—the leaves that fall from trees—that covered the moss, the research team discovered differences in how much nitrogen was being added in each forest and moss type. Leaf litter covering the moss dampened nitrogen-fixation rates. Nostoc, a notoriously high nitrogen-fixing cyanobacteria, was abundant in the mosses found beneath spruce, but scarcer in the deciduous birch stands. Nitrogen fixation—a fertilization process by which microbes pull nitrogen from the air and turn it to nutrients plants can use—influences how much plants grow, and thus how much carbon they pull down from the atmosphere.

Zooming out to the ecosystem scale, these experimental findings could have big implications for how future forests capture and use nutrients to build more plant matter. As climate warming changes fire patterns in the boreal, deciduous species are taking over areas where old-growth conifers burned. Moss from below these deciduous stands showed lower rates of N-fixation.

“An entire nutrient pathway through mosses may be shutting down in favor of another as the climate continues to shift,” said Mélanie Jean, lead author of the study and assistant professor at Université de Moncton.

Mosses are just part of the biodiversity that boreal coniferous forests have historically supported, and Jean said they are important sites of diversity themselves.

“If you look very closely, moss is a forest in miniature,” Jean said, “one that has all these intricate processes just as important as the ones you can see with your eyes.”

The cover illustration by Leshyk depicts some of these invisible processes: Dinitrogen gas swirls down from the atmosphere and is captured by cyanobacteria living in moss in the spruce understory. Fallen birch leaves in the foreground have alighted on moss, interrupting the fixation process. In the background, a wildfire burns in the spruce forest, while the birch loom larger, as if ready to encroach into the burn scar. This is Leshyk’s second cover image for New Phytologist this year.

“We really want to understand how climate, disturbance and species composition are driving the boreal carbon cycle,” said Michelle Mack, senior author and professor of biology at NAU. “We’ve known for a long time that interactions among plants drive major vegetation patterns, but we’re beginning to learn how those interactions affect microbial communities and nutrient cycling. The associations between conifers and mosses we’ve observed are really tight, and they suggest these communities of tiny bryophytes may play a central role in nitrogen availability across the boreal.”

Citation:
How mosses and climate are shaping the fate of nitrogen in the boreal (2020, September 4)
retrieved 7 September 2020
from https://phys.org/news/2020-09-mosses-climate-fate-nitrogen-boreal.html