How China Brought Nearly 200 Million Students Back to School 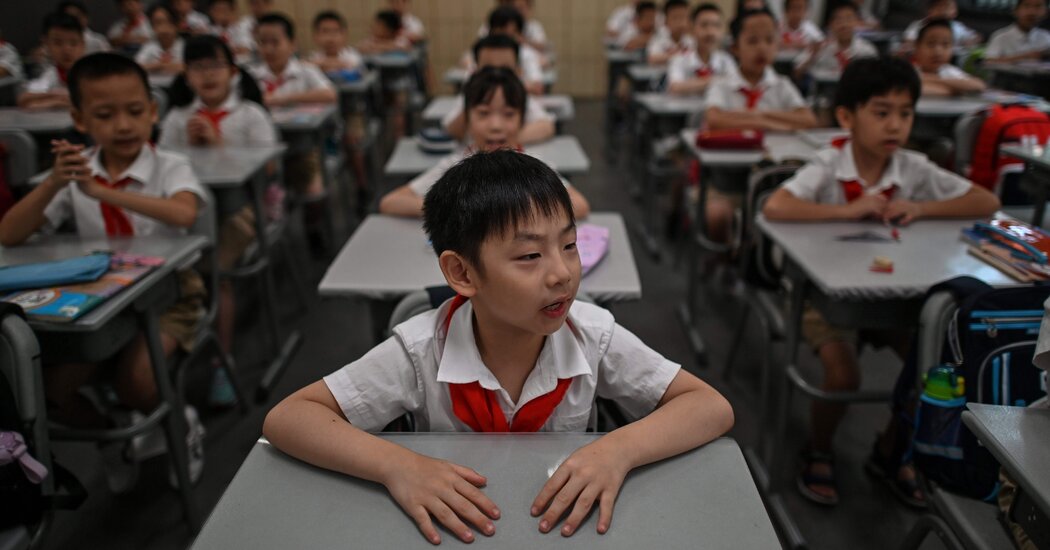 Under bright blue skies, nearly 2,000 students gathered this month for the start of school at Hanyang No. 1 High School in Wuhan, the Chinese city where the coronavirus first emerged.

“I’m not worried,” a music teacher at the school, Yang Meng, said in an interview. “Wuhan is now the safest place.”

As countries around the world struggle to safely reopen schools this fall, China is harnessing the power of its authoritarian system to offer in-person learning for about 195 million students in kindergarten through 12th grade at public schools.

While the Communist Party has adopted many of the same sanitation and distancing procedures used elsewhere, it has rolled them out with a characteristic all-out, command-and-control approach that brooks no dissent. It has mobilized battalions of local officials and party cadres to inspect classrooms, deployed apps and other technology to monitor students and staff, and restricted their movements. It has even told parents to stay away for fear of spreading germs.

China’s leader, Xi Jinping, said in a speech on Tuesday that the country’s progress in fighting the virus, including the opening of schools, had “fully demonstrated the clear superiority of Communist Party leadership and our socialist system.”

China’s top-down, state-led political system allows the party to drive its vast bureaucracy in pursuit of a single target — an approach that would be nearly impossible anywhere else in the world.

In the United States, where the pandemic is still raging, discussions about how and when to resume in-person classes have been fraught. An absence of a national strategy has left school districts to craft their own approach. Coronavirus tests can be hard to come by. Parents have expressed misgivings about sending their children back to classrooms. Teachers’ unions have threatened to strike, while college students have flouted rules against gatherings.

In China, where the virus has largely been under control for months, there is no such debate. The party controls the courts and the news media and quashes any perceived threats to its agenda. Local bureaucracies have little choice but to obey the orders of the all-powerful central government. Independent labor unions are banned and activism is discouraged, making it difficult for the country’s more than 12 million teachers to organize. Administrators have corralled college students inside campuses, forbidding them to leave school grounds to eat or meet friends.

“The Chinese system moves by itself,” said Yong Zhao, a scholar at the University of Kansas who has studied education in China. “The system is run like a military: it just goes for it, no matter what anyone thinks.”

In many ways, China is applying the same heavy-handed model to reopen schools that it has used to bring the virus under control. To stop the epidemic, the authorities imposed harsh lockdowns and deployed invasive technologies to track residents, raising public anger in some places and concerns about the erosion of privacy and civil liberties.

With schools, the government’s effort has in some places been met with similar frustrations. Teachers, who are at times doubling as medical workers, checking for fevers and isolating sick students, say they are exhausted by the new protocols. Students have complained that some policies, such as lockdowns on university campuses, are excessive.

China is introducing many of the same measures as countries in Europe and elsewhere where schools have recently reopened. Principals are instructing students and teachers to keep a distance inside classrooms, though seating arrangements remain largely the same. Teachers are trying to keep students separated by grade, assigning specific routes and entrances for different age groups to avoid crowding. Masks are mostly optional inside classrooms for students and staff.

But China’s approach is also much more demanding, as it has been throughout the pandemic. Students and staff in areas where outbreaks had previously been reported, or who had traveled to areas considered risky, were required to show coronavirus test results before the start of school. Education officials have urged students to avoid “unnecessary outings” aside from going to school, though the rule is unlikely to be enforced. Students are also discouraged from speaking while eating or taking public transportation.

“One heart and one mind to prevent and control the epidemic,” reads a propaganda slogan plastered around school grounds.

China still faces the possibility of fresh outbreaks, epidemiologists say, especially in the fall and winter months. But so far, the measures appear to be effective, with no outbreaks or school closures reported.

The opening of schools has given Mr. Xi a propaganda win in a time of slowing economic growth and international criticism over his government’s early cover-up and mishandling of the outbreak.

The state-run news media has closely covered America’s difficulties in resuming classes, while highlighting China’s progress in getting parents back to work — key to the country’s attempts to drive an economic recovery.

“When parents start a new day at work knowing that their children are well-protected at school,” read a recent commentary by Xinhua, the official news agency, “they will be filled with a sense of assurance living in this land where life is a top priority.”

While the central government has warned school officials to avoid becoming “paralyzed or lax,” it is unclear whether the measures are sustainable. The government’s blanket rules have provoked ire in some corners.

Many schools are already short on staff and resources, and educators say they are struggling to keep up with long lists of virus-control tasks. Some teachers are rising at 4 a.m. just to review protocols.

“There are too many things, and we aren’t compensated,” Li Mengtian, a teacher at a primary school in the city of Shenzhen, said in a telephone interview. “We need to spend a lot of time and energy on our work.”

The latest on how schools are reopening amid the pandemic.

At other schools, educators say that officials are blindly following policies to satisfy higher-ups, even if they are not effective.

Kang Jinzhi, a teacher at a high school in Jingzhou, a city about 130 miles west of Wuhan, said a thermal camera at the entrance of her school constantly provided inaccurate data, labeling everyone who enters as feverish.

“The machine is useless,” she said in an interview. “But the school must set this up because the policies make such demands.”

At public universities, which serve some 33 million students in China, anger has erupted over campus lockdowns that have targeted students while exempting faculty and staff. Officials have also banned students from receiving takeout meals and packages. In recent days, videos have circulated online showing long lines at cafeterias and students trying to hug their dates through campus fences.

“Do you plan to lock us up for life?” complained Pan Sheng, a sophomore at Changshu Institute of Technology in the eastern province of Jiangsu, on Weibo, a microblogging site.

“I feel like I’m in high school,” Ms. Pan said in an interview. “We came to college to gather knowledge and learn how to conduct ourselves in a society, not just sit in class at school every day.”

Many schools have already had some practice in operating under pandemic conditions. Classes resumed for some grades in April and May in many parts of China, though with staggered schedules and limits on the number of students.

Since then, the government has invested heavily in equipping schools with masks, gloves, infrared thermometers and other equipment. An elementary school in the eastern city of Xuzhou, for example, said it had 8,000 masks, 400 bottles of hand sanitizer, 440 pounds of ethanol and 1,000 packages of tissue on hand.

The Ministry of Education’s guidelines call for temperatures to be taken at least three times a day and reported to school officials. The rules are tighter in areas that the government sees as particularly vulnerable to an outbreak. In Beijing, for example, masks are required at all times.

Some measures go even further in expanding the scope of what is typically expected of the country’s educators. The ministry has ordered schools to help students cope with the stress and trauma of the pandemic by providing them with counseling. Officials are being held accountable for reducing myopia among schoolchildren, rates of which rose sharply during the pandemic, the government says, as students spent more time using computers to learn (and probably play).

Despite the hassle of some of the restrictions, many families welcome the resumption of classes. After months of leading makeshift lessons in their living rooms and nagging their children about playing too many video games, parents are relieved to be able to send them back to classes and after-school tutoring programs.

“We controlled the epidemic well and it will be good for our country,” said Sofia Tang, the mother of a high school freshman in the eastern city of Hangzhou. “If we handled this at all like they are handling it overseas, there would be riots.”