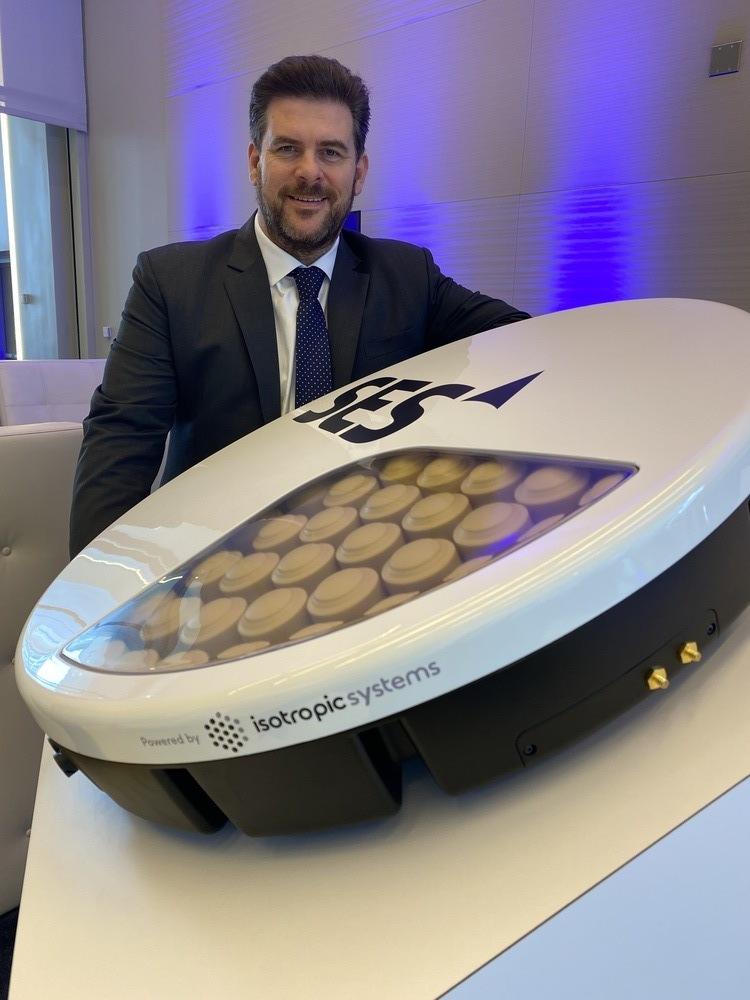 Can you imagine the ancient Romans inspiring a potential revolution in space communications?

In the fourth century, the Romans created a cup that shows red light when lit from behind, and green when lit in front. The Lycurgus Cup showed artists and innovators how to play with and bend light, using glass embedded with tiny flecks of gold. And that was 1,600 years ago, when the best long-distance communication available was through networks of fast horses and nimble riders.

Nearly two millennia later, Isotropic Systems is building a satellite antenna to do the same thing as the cup: bend radio waves, which also fall on the light spectrum. Using minute alterations in its positioning, the hope is to make an antenna that can communicate with just about any satellite in any Earth orbit. That ranges from the behemoth GPS satellites far away to the ever-growing network of satellites close to Earth built by SpaceX and OneWeb and Telesat, among others.

In five to 10 years, this means that a single device could connect with satellites just about anywhere. It could be just as helpful for fast Internet in a Congo community, or getting information for soldiers deployed in remote Middle Eastern deserts. The system is still more than a year from readiness, but with $56 million USD in backing to date, Isotropic now has a lucrative contract in hand to test it with the U.S. military.

“We want to select everything within the field of view, using every satellite in the sky, with a single piece of technology,” Isotropic Systems CEO John Finney said. On Thursday (Sept. 24), Isotropic announced a partnership with SES Government Solutions to evaluate the antenna with the U.S. Air Force Research Laboratory, using SES medium-orbit satellites.

If trials go well, the military could be a powerful reference customer as Isotropic debuts its “optical beamforming” antenna commercially in 2022. According to Finney, that will just be a start of a greater revolution as Isotropic seeks to connect with satellites anywhere. Today, customers generally need to be loyal to one company and one proprietary system, whether it be SpaceX or Intelsat. But that could all change in the next decade.

It’s no exaggeration to say space is changing quickly. Thousands of low-Earth orbit satellites are competing for different broadband networks to bring cheaper, faster Internet to remote areas. Simultaneously, the rise of 5G networks is allowing for the Internet of Things — a proliferation of networked devices from the fridge in your kitchen, to the few hundred shipping containers on a typical vessel crossing the Atlantic. IoT allows us to track items from anywhere in the world. Isotropic now wants to make it easier to connect from anywhere in the world.

There have been remote “terminals” before, but Isotropic says the market is ready for disruption. Most terminals connect to a single system and had only slightly better performance or cost across generations, Isotropic said. The company’s proprietary antenna is expected to channel multiple beams at the same time, with no degradation in performance. The terminal will also have enough on-board “smarts” to figure out what satellites are available and how to get around inevitable signal blockages in mountainous or remote areas.

“When you throw in a terminal that can pick between any of those satellites [in orbit] and unlock the entire ecosystem of capacity from that single terminal, it shifts buying power,” said Brian Billman, Isotropic’s vice-president of product management. In other words, Isotropic’s vision is to have the consumer dictate where they can find the best Internet, no matter where they are located — rather than the service providers.

Finney acknowledged such a consumer revolution would not happen overnight, but he added that the typical Internet customer today in a developed country is sophisticated in terms of their needs and desires. Most millennials and Generation Z members expect streaming mobile Internet in just about any highly populated urban area, not to mention many suburbs, and get frustrated with dropouts or virtual traffic jams. Internet connectivity is even more precious now during the pandemic when most of us are working remotely, Finney pointed out.

As more broadband solutions become available, Finney said, the customer will want the ability to switch dynamically between systems to avoid blockages or dropouts. (In a sense, his argument sounds like the discussions in favor of unlocking mobile phones from their “home” network under the provider who first provided the phone for sale, discussions that dominated the earlier 2000s and led to greater consumer freedom for most folks.)

Another risk could be running out of runway before the technology is commercially available, although Isotropic does not anticipate that now. Backers over the company’s three funding rounds include Boeing, the United Kingdom government, the United Kingdom Space Agency and a publicly funded space company that is not ready to disclose its affiliation with Isotropic yet. Isotropic has about $35 million of runway now that should last for the next 18 months, Finney said.

The company added its new military contract will help the U.S. soldiers with what they term as “arbitrage”, or the ability to move within different satellite systems dynamically for different operational needs. Isotropic said it is ready to conduct the tests. “Then they’ll go back and say confidently, within their defense community, this technology is coming. We’ve seen it. It works,” Finney said of the current contract.