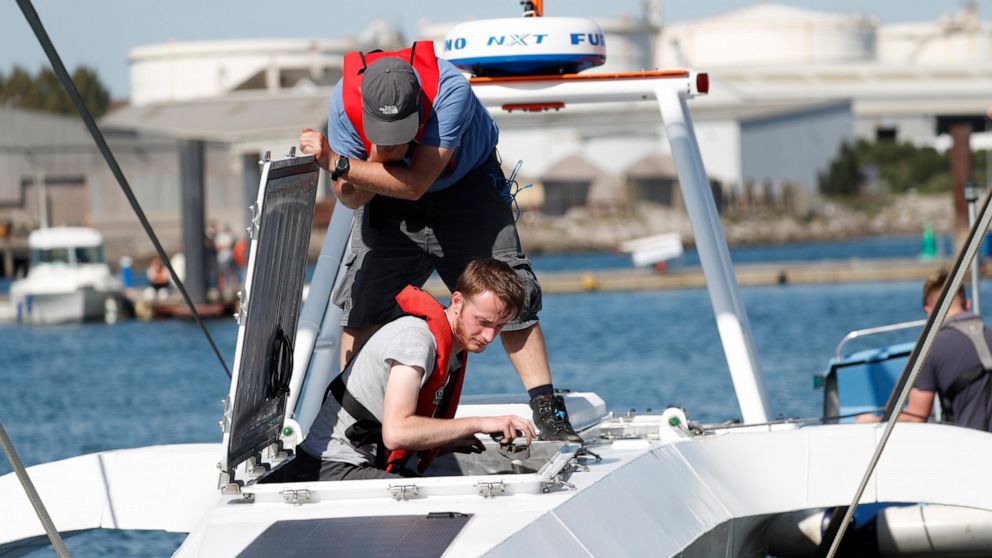 Dignitaries, seafarers and scientists are gathering in Plymouth, England, to mark the 400th anniversary of the departure of the Mayflower, which carried a group of Puritan settlers to a new life in America

PLYMOUTH, England — Dignitaries, seafarers and scientists were gathering in Plymouth, England, on Wednesday to mark the 400th anniversary of the departure of the Mayflower, the ship that carried a group of Puritan settlers to a new life in America.

The journey would launch a new chapter of expansion and empire for Europe, and bring disaster for the Native peoples who had lived in the Americas for millennia.

Four centuries to the day since the ship sailed out of Plymouth harbor, dignitaries from the United States, the U.K. and the Netherlands — home to some of the Pilgrims — are launching a new Mayflower. Unlike its wooden predecessor, this vessel is a sleek, high-tech trimaran powered by the sun and steered by artificial intelligence.

The Mayflower Autonomous Ship, which will get a snappier moniker at Wednesday’s naming ceremony, is set to follow in its forebearer’s wake by crossing the Atlantic from Plymouth, England, to Plymouth, Massachusetts, this time on a marine research trip — and without people aboard.

The ship’s creators, marine research organization ProMare and computing giant IBM, hope it will be the first in a new generation of crewless high-tech vessels that can explore parts of the oceans too difficult or dangerous for people to reach.

The coronavirus pandemic has scaled back trans-Atlantic Mayflower commemorations, and delayed the ship’s voyage until 2021. It will undertake six months of sea trials and short trips before setting out across the Atlantic next spring on a voyage to measure ocean health: assessing the impact of climate change, measuring micro-plastic pollution and studying populations of whales and dolphins.

The ship’s launch in Plymouth, 200 miles (320 kilometers) southwest of London, is part of 400th anniversary commemorations involving the British, Americans, Dutch and the Wampanoag people, who are native to what is now New England.

In 1620, the Wampanoag helped the exhausted Mayflower settlers survive their first winter. But soon colonial expansion, conflict and new diseases were having a devastating impact on North America’s indigenous peoples.

Wampanoag stories have been marginalized on past Mayflower anniversaries, but are playing a big part in events and exhibitions this time around.

’It’s going a long way to lend balance to this story,” said Paula Peters, a Wampanoag writer and educator who has helped create anniversary exhibitions, including one opening later this month at The Box museum in Plymouth.

“We don’t expect people to take one side or the other,” Peters said. “But certainly the story of the Mayflower is one that really can’t be told without telling also the story of the Wampanoag.″

Jo Kearney in Plymouth contributed to this story.