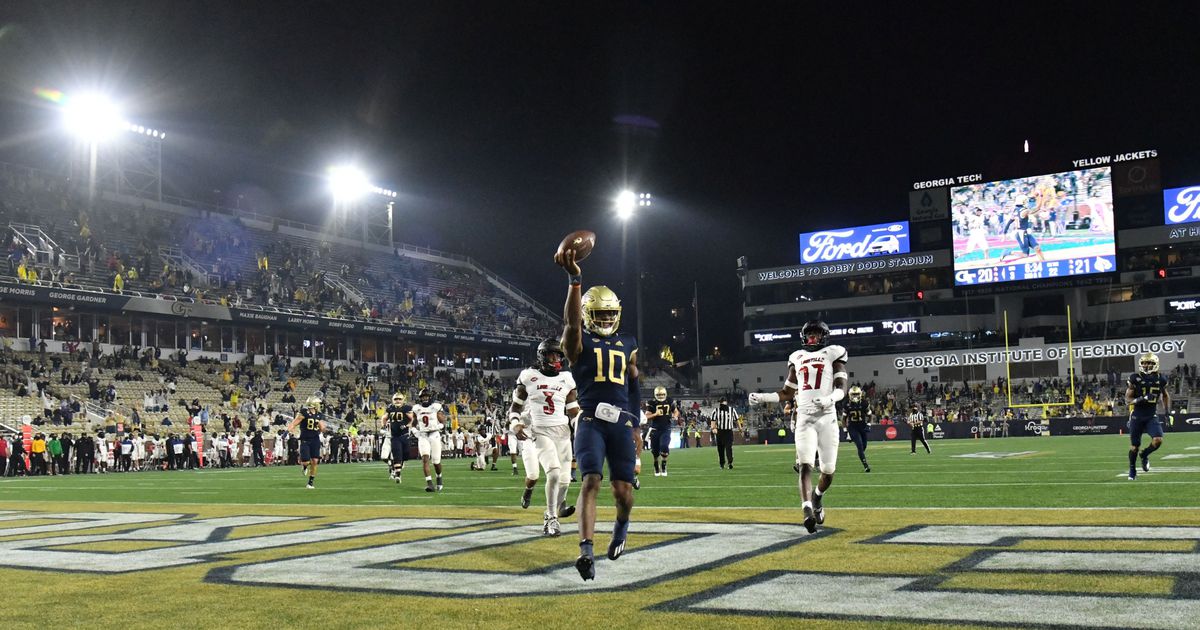 Enough of the turnovers, the Jackets decided. Using a bye week to concentrate on ball security, they seemed to flush from their system the 10 turnovers from their previous two games. It was a most effective purge, as they gave Louisville exactly no help this night.

No wet ball eluded their grasp, while the Cardinals committed three fumbles that were all costly. Credit Tech’s comfort with the elements, players and head coach agreed, to the waste of a perfectly good, expansive and expensive indoor practice facility. On rainy practice days, the Jackets are known to step outside and slop around just to get comfortable with the elements.

The best that can be said of a Tech defense that gave up 471 yards to Louisville and allowed the Cardinals a 13-minute advantage in time of possession was that it was anxious to pick up any loose change that the Cardinals dropped.

That went for special teams, too. For the fumble recovery of the night belonged to Bruce Jordan-Swilling on third quarter kickoff return. As Louisville returner Hassan Hall laid atop him, tackled but not officially brought to the ground, Jordan-Swilling reached from below muscled the ball free, as if stealing a loaf of bread from the grip of a sleeping man while beneath his bed.

But on to the real star of the evening. Friday’s was a victory that put on display the many sparkling facets of the Tech offense, without any of the flaws.

Such a performance filled certain members of a 2-2 team with a flush of confidence.

There were elements of skill and creativity running through all of Tech’s 46 points, the most scored in Collins’ brief 16-game tenure.

They scored on a drive kept alive by a fake punt, despite the fact that Tech’s punter may be one of its brightest stars.

They scored in a way that mocked Louisville’s attempt to rattle freshman quarterback Jeff Sims. Reading one blitz, Sims just ran through the congestion for a 22-yard score. Before being knocked down by another on a third-and-goal on the 19, Sims was wise enough to dump a pass to Jahmyr Gibbs, who sprinted with purpose, hurdled a defender and stuck the landing in the end zone.

Combine that play with turning a simple screen pass into a 41-yard gain that completely energized a Tech team toward the end of the first half. And Gibbs really should lay claim to more than an agent’s share of Sims’ 249 passing yards.

They scored just before the end of that half – to importantly pull within seven of Louisville – on a reverse pass from receiver Ahmarean Brown. Yes, it would seem that Tech’s play-callers were on some good, presidential-grade steroids this night.

On Friday, Tech’s offense purred contentedly. Seven Jackets crossed the goal line this one night. All at the expense of a team that has now given up 112 points the only two times it has played the Jackets. Louisville has been turbo boost to the Tech ego.

For Collins, to whom every game is a referendum on his process, Friday represented an opportunity to comment on certain big steps this team has made in rehabbing last season’s 3-9 transitional record.

“This group has a chance to be really good in the present. I don’t think we have to talk in the future tense,” Collins said.

And with that, he was off to enjoy a well-earned off-day Saturday. He was going to take his family to a pumpkin patch, he said, weather permitting. Maybe relax a bit and enjoy a most satisfying victory before the prospect of playing No. 1-ranked Clemson next Saturday infringes on the buzz.

Collins can even get in a little early scouting if he wishes. For I hear, over and over again, that the Tigers are on TV on Saturday night.

ExploreWeek 6 college football schedule: How to watch all 29 FBS games

Steve Hummer writes sports features and columns for The Atlanta Journal-Constitution. He covers a wide range of sports and topics.