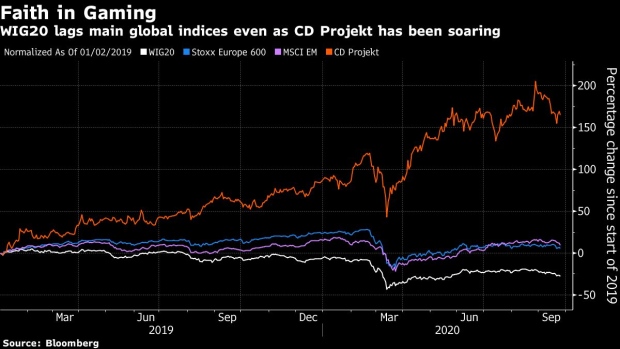 (Bloomberg) — A flurry of big-ticket gaming, e-commerce and telecoms announcements has focused the attention of tech investors on an unlikely destination: Poland.

This month’s initial public offering by online marketplace Allegro is the biggest ever in Warsaw and worth as much as $2.7 billion. CD Projekt SA, Europe’s second-biggest biggest gaming company, plans to release its make-or-break futuristic Cyberpunk 2077 game in November, already dubbed as the most awaited launch this year. Mobile games producer Huuuge Inc. and People Can Fly SA, a studio that helped make Fortnite, also plan to list shares in Warsaw later this year.

While European governments have repeatedly tried and failed to create the continent’s own version of Silicon Valley, Poland’s digital remake is fed by local IT talent, an upwardly-mobile population and still low operational costs. The government has offered tax breaks for tech investments and switched to cloud technologies in partnership with Google Inc. and Microsoft Inc.

The change in consumer habits online has benefited companies beyond those purely focused on e-commerce. Advent International is considering the sale of Polish postal locker provider InPost SA, valuing the company — that been boosted by an increase online shopping — at about $2.3 billion, according to people familiar with the matter.

Aman Ghei, principal at Finch Capital technology fund in London, said Poland’s IT industry has reached critical mass and its talent pool as “one of the best in Europe.” Still, it may be difficult to expect a large stream of public deals.

“For IPOs in local markets, you need serious scale — and Allegro is a massive business well known to investors,” Ghei said by email. “It becomes a bit more challenging for enterprise software companies that are not well-known to the institutional and retail investor base as they need to provide free float for it to be a successful deal.”

Part of the allure of Allegro, which makes money through fees for sellers who list products on its website, is that online still accounts for about 8% of retail sales in the country, about half as much as in the U.K. and a third of the share in China.

Another boon for the company, whose gross merchandise volume jumped 54% to 16 billion zloty ($4.1 billion) in the first half of 2020, is that Amazon.com Inc still sells to Polish consumers through its German subsidiary, limiting its appeal.

Allegro and CD Projekt together are set to become the two biggest Warsaw-listed companies — highlighting the shift away from old-economy industrials and banks that have dominated the WIG20 index.

There is uncertainty about sustainability of the current boom. The accession to the European Union in 2004 allowed for access to broad markets, but also triggered a brain drain. Europe’s most-valued start-up, Swedish payment provider Klarna AB, was started by immigrant Pole Sebastian Siemiatkowski, and U.S. software house Snowflake Inc., co-founded by Marcin Zukowski.

For years, tech-savvy graduates have been a sought-after resource for companies relocating IT and data departments to Poland, where programmers’ salaries are still about half of paychecks in neighboring Germany. Some of them started to flourish with their own start-up ideas.

In 2006, two years after Poland joined the European Union, the founder of Huuuge, the mobile game maker with $260 million of sales last year, relocated his IT business from Finland to the western Polish city of Szczecin, just as Nokia started its decline as a European tech champion.

“Some peers considered that as a bold and risky move, which it certainly was,” Anton Gauffin said in email. “Those were the years where we learned how to build truly exceptional mobile games. Poland should be proud of its gaming talent.”