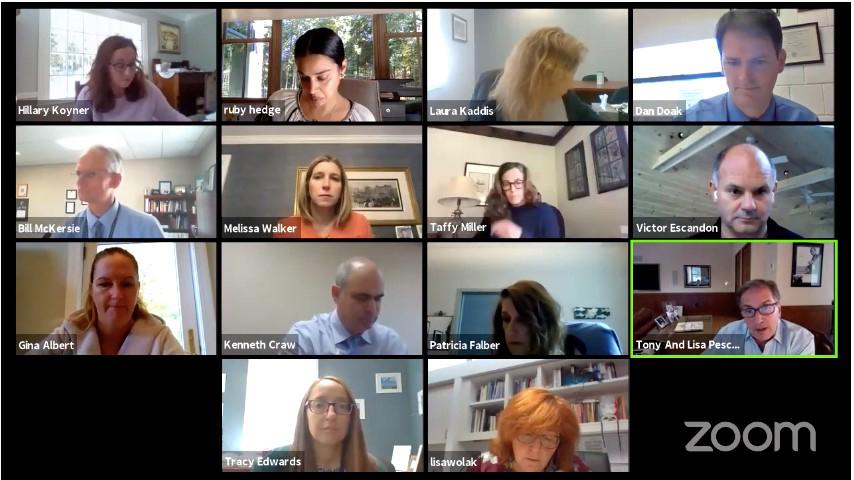 WESTON — Students are expected to fully return at the lower levels later this month, raising concerns for the school board about what that means for those still distance learning.

The Board of Education supported the lower schools switching to fully in-person and expanding the middle school’s hybrid learning to a full day beginning Oct. 26. But members raised concerns the plan the district’s administration presented Thursday could require additional staffing dedicated to distance learning. The high school would remain in its hybrid early-dismissal model.

“While in this document we are recommending hybrid full day, our energies are substantially on getting everybody back in,” Superintendent William McKersie said at a BOE meeting Thursday. “We want everybody back in — certainly K-5 we want them back in and that’s what the document is saying.”

The possibility of having to hire additional staff to designate teachers for the voluntary distance learning program caused concern for some Board of Education members.

“I don’t think hiring an added expense is just the quick easy answer,” BOE member Ruby Hedge said. “I think we need to get creative on all fronts.”

Hedge said the discussion on having a designated teacher for distance learning had been ongoing since the summer, and it had to be acknowledged a mistake may have been made that no moves were made.

“We have due diligence to do here on how we make the right decision, but still be financially responsible to this town,” she said.

Mckersie said the district was facing a critical pivot point. He said clarity on the distance learning program would be provided to the BOE in the coming days, including the proposed staffing arrangement and estimated cost.

BOE member Melissa Walker said at a minimum a lot more time was needed to review the distance learning program. She said she was also concerned of designating new distance learning teachers to students who have already become accustomed to their current classes.

“Cost is just one of the many factors that I think have not been thought through thoroughly,” she said.

Mckersie said the administration was not trying to back anyone into a corner, but was working to run the system while modifying a new approach.

“We’re just trying to keep this moving and to do that in the best way possible,” he said.

BOE member Hillary Koyner said it would be helpful if the board could be provided a distance learning option without adding additional teachers.

“I don’t know how long this is going to go on for,” she said.

With a possible full return at the lower level, board members said community responsibility in keeping schools open will be key.

A district-wide pivot to temporary remote learning occurred earlier in the school year after it was discovered two positive cases at two different schools were connected.

BOE member Gina Albert said the choices parents make when sending their kids to school will be even more critical now. She said enforcing the safety guidelines will also be crucial.

“If we’re going to take this step to have this many students back in our buildings there has to be a concerted communication effort around a simple decision tree before you send a student in our buildings,” she said. “Whatever the next step is that is a critical piece to making it work.”