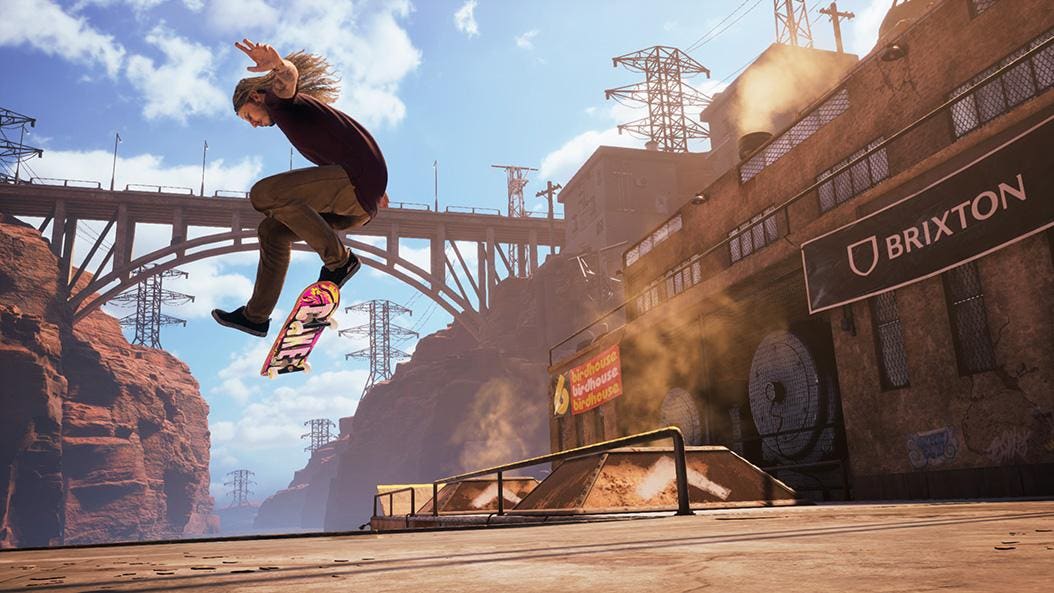 Believe the hype: Tony Hawk’s Pro Skater 1 + 2 is everything fans have demanded, and so much more. For newcomers, it’s the perfect tribute to an era-defining game. For people like me, who played the originals back in the early 2000s, there’s every chance this glorious remake will provide a surprisingly intense emotional rollercoaster.

Hearing “Guerrilla Radio” during the intro–a song that plenty of series veterans will have in their heads as they first load the game–is just the start. Returning to the Warehouse, 20 years since that first visit, awakens long-dormant but incredibly dependable muscle memory. Completing that initial 20,000-point combo seals the deal.

THPS 1 + 2 makes me happier than any other game I’ve played in years. Admittedly, I’m a 34-year-old “grown-up” whose life responsibilities, along with the coronavirus-defined “new normal” and 2020’s socio-political hellscape, have likely made me forget what “fun” actually is. This remake’s grip transcends nostalgia; not only does it prove how incredible the original was, but also demonstrates real smash-hit credentials if it debuted today.

In my first 24 hours of getting THPS 1 + 2, I did nothing other than eat and sleep until getting 100% on both games–just like old times. Even though 100% sounds like the game is done and dusted, it barely scratches the surface of the full experience, which offers endless challenges and countless new twists–and, curiously, no microtransactions.

Through this effort, Vicarious Visions has redrafted the blueprint for future developers looking to rework popular IPs–and given how good THPS 1 + 2 is, there’s every chance that companies are already scrambling to secure more properties for a modern-day overhaul, and the same success.

A deep respect for the wider series

Vicarious Visions has carefully respected the source material before adding its own personal flair. Traditionally, the safest way to do this with remakes is to recreate their original counterparts to the letter; aside from new engines, they’re essentially remasters. Yet with THPS 1 + 2, VV took a holistic view in its new take on the first pair of games, looking to later games to enhance and bring new abilities to those iconic levels that everyone knows.

The manual–which debuted in Tony Hawk’s Pro Skater 2–as well as revert, which arrived with Tony Hawk’s Pro Skater 3, are readily available for trick linking, offering the opportunity to break old records on established arenas once limited to one, or neither. I found myself hitting revert as part of my muscle-memory-lane experience–realizing it was there had me beaming.

Similarly, the ability to edit tricks and their bindings is a real boon, as is the freedom to choose any trick you like without having to pay for it. Stat points are collected, while you can actively reallocate them depending on circumstance–perfect for point-specific challenges, or height-related secret tapes. Everything is focused on fun and simplicity.

All the levels from Tony Hawk’s Pro Skater have been given a further five objectives, bringing them in line with its successor. Even seasoned veterans get more bang for their buck with each stage, and each challenge channels the spirit of the series–they’re a delight.

Last but not least, one of the most impressive THPS 1 + 2 adjustments is the ability to quickly restart after a bail. The classic THPS format of two-minute stages meant that failed attempts at tricks could be disastrous; you’d have to watch the slow recovery of your skater before carrying on. Here, a VHS-like crackle sees your skater reappear almost immediately, like nothing’s happened; it makes the series faster than ever.

After getting “100%” in both titles–completing every single level and collecting all the stat points for my character–I’d only cleared around 50 of the game’s SEVEN HUNDRED AND FOURTEEN challenges. As with 90% of remakes, people would have been happy with the base Tony Hawk games being brought up to modern standards and nothing else. These additional targets not only add depth–they make the new experience so much better.

Challenges are split into five categories: skater, combo, multiplayer, skate park, and create-a-park, encouraging gamers to get the very most out of every aspect of the game. These are further divided into challenge collections for bragging rights; chances are most people will get Rookie status, but Veteran and Legend truly pushes even the most hardened THPS experts.

This segmentation makes the initial, mammoth task of 700+ challenges so much more digestible and enjoyable, playing into the game’s real draw: quick tests, short time limits, and a new level of fun.

It knows its strongest asset and makes it even better

The THPS franchise’s soundtracks are as influential as the gameplay of the titles themselves, so to see enhancements to its music offering only shows how much the remake cares about the originals.

There was a lot of whining about THPS 1 + 2 omitting just three original songs, but none of them are series classics, while another 37 mostly fitting additions join the playlist. New inclusions range from songs by high-profile bands like A Tribe Called Quest and Reel Big Fish (which, on reflection, ought to have made the cut originally), through to great tunes from relative unknowns. These will become household names, if this game has the same effect as its forefathers.

The way the songs are implemented goes so much further in demonstrating how the OST is as iconic as the game itself. Tracks don’t stop at the end of each two-minute run; they continue through restarts and menus, meaning you no longer listen to two-thirds of a song (unless it’s Dead Kennedys’ “Police Truck”, which still delightfully finishes with perfect timing).

Playlists are also customizable, meaning you can remove what you don’t like or, if you’re a purist, you can tailor the playlist to the game you choose. There’s a dedicated button to skip songs, and a space reserved in the bottom-right to keep you updated on what’s on. Marvellous.

Every game has its weird, often-annoying quirks, and after two decades, Vicarious Visions has actively sought to preserve the characteristic issues that made the original THPS and THPS2 so frustratingly endearing. Aside from Crash Bandicoot N.Sane Trilogy–which, if anything, made existing problems even more problematic–I’ve not seen a remake embrace classic oddities like this. If anything, with the Unreal Engine, extra work must have been needed to replicate them.

You can still skate uphill, at speed, without ever planting your foot. Hitting a semi-circular ramp-end at an odd angle will once again see you helplessly wrap around it, as if the obstacle is made of steel and you’re a human magnet. Grass remains a perfectly skateable surface. You can still save your impending death by holding the grind button and hoping in vain you’ll land on something nearby.

Meanwhile, every challenge you hated from the originals is just as difficult now. For me, trying to nail the VB Huge Transfer on Venice Beach still proves an absolute horror; San Francisco’s pagoda gap secret tape is as fidgety as ever; the Death Grind in Minneapolis might have accounted for about 10% of my overall game time.

Yet that’s exactly how it was before–and the remake shouldn’t hold your hand either. It’s a badge of honor, and this reimagining rightly welcomes its early issues with open arms.

The clearest takeaway from THPS 1 + 2 is that it reminds you just how clever and carefully designed the original games were. The fact its original grinds, ramps, and gaps are meticulously recreated–and they’re just as enjoyable today–is testament to Neversoft’s vision.

I hope we get Tony Hawk’s Pro Skater 3 + 4. After this, there’s no good reason for Vicarious Visions to leave it here. Before that happens, it’s hard to see a remake hitting the mark as well as THPS 1 + 2 does.

Disclaimer: I was provided with a copy of Tony Hawk’s Pro Skater 1 + 2 in exchange for a fair and honest review.