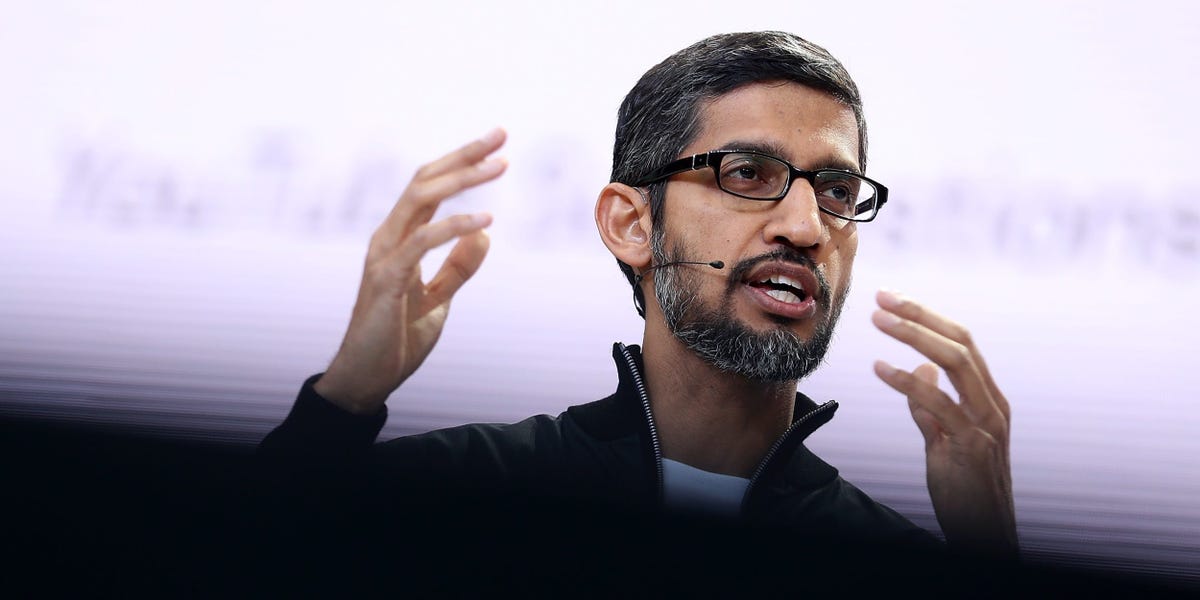 Facebook was thrust back into the spotlight last week after BuzzFeed News published a leaked memo from a whistleblower who accused the social media network of extensive failures to combat political and electoral misinformation around the world.

Amid a steady drumbeat of reports from media and researchers over the past several months, Facebook has repeatedly come under fire for mishandling crises, like its delayed response to threats of violence against anti-racism protesters and an unwillingness or reluctance to enforce its own rules in cases involving high-profile politicians.

With each new revelation about Facebook, however, researchers say another tech giant is continuing to dodge scrutiny: Google.

“Google is really getting a pass on transparency by just staying under the radar,” Laura Edelson, a researcher who studies political ads and misinformation at New York University, told Business Insider. “No one’s talking about Google.”

Google has faced pushback over the years for how its subsidiary YouTube deals with misinformation, hate speech, and radical content posted by users. But when it comes to paid ads across its various products — YouTube, Google search results, Gmail, and ads served on websites across the internet through Google Ads — regulators, journalists, and the public have paid much less attention.

While Facebook still faces major backlash over how it moderates content generated by both users and advertisers, some researchers have praised the social network on the latter issue for actions like sharing more detailed data with researchers and widening its net to track “issue” ads. But between Facebook’s corrective steps and its initial missteps, researchers worried that it’s taken some deserved heat off of Google.

“We spend a lot of time talking about Facebook, and a big part of why is that Facebook is doing some things,” Edelson said, adding: “Google doesn’t make that much stuff transparent, which is part of why no one is talking about Google.”

“Google owns a larger share of the online advertising market, but has looser standards governing political ads. The company also provides the public with less information about those ads. That means that users may be inundated with manipulative or misleading ads without knowing it,” Michael Clauw, a spokesperson for the research group Tech Transparency Project, told Business Insider. (TTP has reportedly received funding from Oracle, a Google competitor).

Google disputed those characterizations, with a spokesperson telling Business Insider the company is “deeply committed to delivering the highest standards in transparency, choice and controls in advertising.”

But multiple researchers said that by narrowly defining political ads, disclosing only basic details about them, and at times, failing to detect political ads or advertisers in the first place, Google may be masking the extent to which Americans are encountering misleading information while using its products in the run-up to the 2020 elections.

Tech reigns in the Wild West of digital ads

While Facebook has pulled in the majority of digital political ad revenue in the US during this election cycle — nearly 60% as of February, according to eMarketer — Google still captured almost one-fifth of the market, bringing in more than $240 million. By the companies’ count, since they launched political ad-tracking archives in May 2018, Facebook says advertisers have spent nearly $1.7 billion, while Google says that number is just shy of $400 million.

But researchers and campaign finance experts say those numbers don’t paint the full picture of who is spending money to sway voters, nor do the numbers say where and how the companies are spending it, particularly in Google’s case.

“The main source of the problem is the piecemeal platform-by-platform approach to political ad transparency,” Brendan Fischer, director of federal reform at the Campaign Legal Center. “There are no laws requiring that platforms make political ads publicly accessible. It’s entirely a self-regulatory effort.”

Unlike TV and radio ads, which are regulated by the Federal Elections Commission and Federal Communications Commission, internet ad companies operate largely on their own terms. In a 2019 study, researchers concluded that Google and Facebook deliberately undermined the FEC’s efforts to regulate digital ads.

“Digital advertisements used to interfere in the 2016 U.S. presidential election lacked disclaimers stating who paid for them,” the researchers said, arguing it was the result of Google and Facebook putting “profit ahead of the public interest in seeking exemptions from disclaimer requirements, refusing to change the size of their advertisements and downplaying the deceptive potential of political ads.”

Left to their own devices, tech platforms have come up with wildly different approaches for detecting and determining what counts as a political ad, what advertisers need to disclose, how much to share with researchers and users, and how to enforce those rules. And it has largely fallen to researchers to hold them accountable.

Slipping through the cracks

One issue researchers raised with Google’s approach is its narrow definition of political ads (or election ads, as Google refers to them). Google considers election ads to be anything that mentions federal- or state-level elected officials, candidates, or political parties, as well as state-level ballot measures and initiatives.

But researchers say that misses a crucial category of ads: issue ads, which address often highly divisive political and social issues that are frequent targets for bad actors.

“Many of the ads that were funded by Russia [during the 2016 US elections] didn’t mention candidates at all. They instead focused on the divisive, social-political issues,” Fischer said.

“Those ads would very likely be included in Facebook’s archive because Facebook has a broad definition of political ads,” he said, adding: “The fact that Facebook does have a broad standard of political ad … makes it much more possible to do research and oversight of the kinds of communications that are being disseminated to voters.”

In an effort to combat the micro-targeted ads that got Facebook into hot water, Google did announce in November that it would be “limiting election ads audience targeting to the following general categories: age, gender, and general location (postal code level).”

But researchers also pointed to how Google actually implements and enforces the limited restrictions it has imposed, bringing up concerns around the level of detail and searchability of data in its ad archive and the rigor with which it verifies that political advertisers are being properly included.

“The Google archive provides only very big ranges of the dollar amounts that are spent on a particular ad,” Maggie Christ, a senior researcher at the Campaign Legal Center, told Business Insider.

“It makes it difficult, especially if you’re trying to match up with what a group is reporting to the FEC,” she said. “It might mean that it can all be accounted for on Google, or it might mean that tens of thousands of dollars are unaccounted for and might be running on a completely different platform.”

Additionally, when Google removes an ad for violating one of its policies or when the advertiser purchases the ad through a third party, researchers can’t actually view the ad’s content in the archive, making it more challenging to understand how advertisers might be trying to manipulate voters.

“Even in the archives, you couldn’t go and uncover it and see which candidate that ad might’ve mentioned and what the content might’ve been,” Christ said.

Last year, The Wall Street Journal also reported that the archive was “fraught with errors and delays” and had omitted ads run by the campaigns of former Democratic presidential hopefuls Sen. Elizabeth Warren and Sen. Bernie Sanders.

Google defended its archive and updates it says it has made in recent months, with a spokesperson pointing to how it’s “now updated daily with even more information on who purchased the ad, how much they spent, how many people saw it, how they were targeted and in what geographies.”

Absent any oversight from federal regulators, researchers ultimately must take Google’s word that it’s effectively enforcing its policies — that its AI systems are catching political ads, that it verifies whether advertisers are who they tell Google they are, or that it’s able to detect and remove ads that violate its myriad policies against false claims, clickbait, electoral misinformation, and hacked material.

So far, they aren’t convinced.

Wired recently reported that a search marketer in New York, as an experiment, was able to bypass Google’s political ad detection systems simply by omitting a candidate’s first or last name. When contacted about potential loopholes the marketer had identified, Google still declined to consider the search terms where advertisers wanted the ad to appear.

“If you’re searching for voting and someone’s bidding on those keywords, you might want to see what they’re saying … That’s a ripe target for disinformation about voting,” Republican digital strategist Eric Wilson told Wired.

Alex Stamos, Facebook’s former security chief and now a researcher at Stanford, tweeted last week that he and other colleagues had “discovered misleading Google ads being run on important election integrity search terms by the Washington Times.”

“First, we believe that these headlines are not factually supported by the underlying articles and should be disallowed under Google’s clickbait policies. Second, an exemption for media companies means these ads are not visible in Google’s political ad archive,” Stamos said.

Political advertisers — and likely, bad actors — aren’t backing down on their use of Google to target Americans ahead of the November elections. President Donald Trump’s campaign secured prime ad space on YouTube’s homepage in the days before the election for an estimated $1 million per day, despite a history of running ads that violate Google’s policies.

Google is taking some steps when it comes to products like search results, announcing last week that it can more quickly detect misinformation during breaking news events and will crack down on potentially misleading autocomplete suggestions about voting information and candidates.

Still, researchers remain concerned and largely in the dark about how moneyed interests could be paying Google to try to influence its users’ political attitudes and behaviors.

“Facebook draws a lot of fire for monetizing user data or serving manipulative political communications, but Google often engages in the same practices. In fact, Google has even more data about its users and allows a bigger group of political advertisers to leverage that data. Many users don’t realize that they’re using Google when they visit a website that serves ads through DoubleClick or contains embedded YouTube videos,” Clauw said.

“All of those things make Google Ads, the Google Ad space a real black box, so I couldn’t even tell you what’s harmful there,” Edelson said.