Finding vaporized metal in the air of an exoplanet 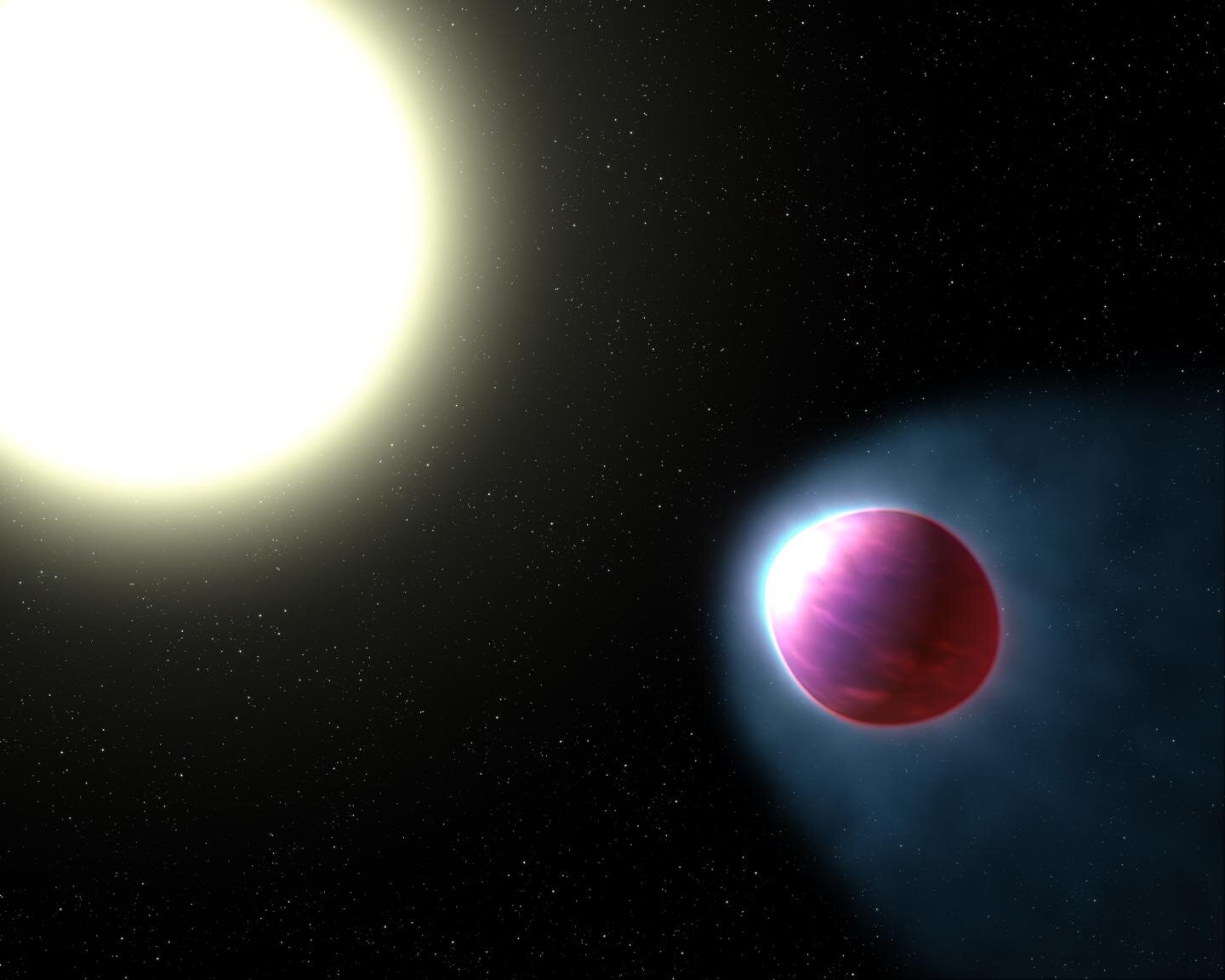 WASP-121b is an exoplanet located 850 light years from Earth, orbiting its star in less than two days—a process that takes Earth a year to complete. WASP-121b is very close to its star—about 40 times closer than Earth to the Sun. This close proximity is also the main reason for its immensely high temperature of around 2,500 to 3,000 degrees Celsius. This makes it an ideal object of study to learn more about ultra-hot worlds.

Researchers led by Jens Hoeijmakers, first author of the study and postdoctoral research fellow at the National Centre of Competence in Research PlanetS at the Universities of Bern and Geneva, examined data that had been collected by the high-resolution HARPS spectrograph. They were able to show that a total of at least seven gaseous metals occur in the atmosphere of WASP-121b. The results were recently published in the journal Astronomy & Astrophysics.

Unexpected complexity in the atmosphere of exoplanet WASP-121b

WASP-121b has been extensively studied since its discovery. “The earlier studies showed that there is a lot going on in its atmosphere,” explains Jens Hoeijmakers. And this despite the fact that astronomers had assumed that ultra-hot planets have rather simple atmospheres because not many complex chemical compounds can form in such blistering heat. So how did WASP-121b come to have this unexpected complexity?

“Previous studies tried to explain these complex observations with theories that did not seem plausible to me,” says Hoeijmakers. The studies had suspected that molecules containing the relatively rare metal vanadium were the main cause of the complex atmosphere in WASP-121b. According to Hoeijmakers, however, this would only make sense if a more common metal, titanium, were missing in the atmosphere. So Hoeijmakers and his colleagues set out to find another explanation. “But it turned out that they were right,” admits Hoeijmakers unequivocally. “To my surprise, we actually found strong signatures of vanadium in the observations.” At the same time, however, titanium was missing. This in turn confirmed Hoeijmakers’ assumption.

But the team made other, unexpected discoveries. In addition to vanadium, they newly discovered six other metals in the atmosphere of WASP-121b: Iron, chromium, calcium, sodium, magnesium and nickel. “All metals evaporated as a result of the high temperatures prevailing on WASP-121b,” explains Hoeijmakers, “thus ensuring that the air on the exoplanet consists of evaporated metals, among other things.”

A new era in exoplanet research

Such detailed results allow researchers to draw conclusions about the chemical processes that take place on such planets, for example. This is a crucial skill for the not too distant future, when larger, more sensitive telescopes and spectrographs will be developed. These will allow astronomers to study the properties of smaller, cooler rocky planets similar to Earth. “With the same techniques we use today, instead of just detecting signatures of gaseous iron or vanadium, we will be able to focus on biosignatures, signs of life such as the signatures of water, oxygen and methane,” says Hoeijmakers.

The extensive knowledge about the atmosphere of WASP- 121b not only confirms the ultra-hot character of the exoplanet, but also underlines the fact that this field of research is entering a new era, as Hoeijmakers puts it: “After years of cataloging what is out there, we are now no longer just taking measurements,” explains the researcher, “but we are really beginning to understand what the data from the instruments show us. How planets resemble and differ from each other. In the same way, perhaps, that Charles Darwin began to develop the theory of evolution after characterizing countless species of animals, we are beginning to understand more about how these exoplanets were formed and how they work.”

Distant ‘heavy metal’ gas planet is shaped like a football

Citation:
Finding vaporized metal in the air of an exoplanet (2020, October 8)
retrieved 8 October 2020
from https://phys.org/news/2020-10-vaporized-metal-air-exoplanet.html