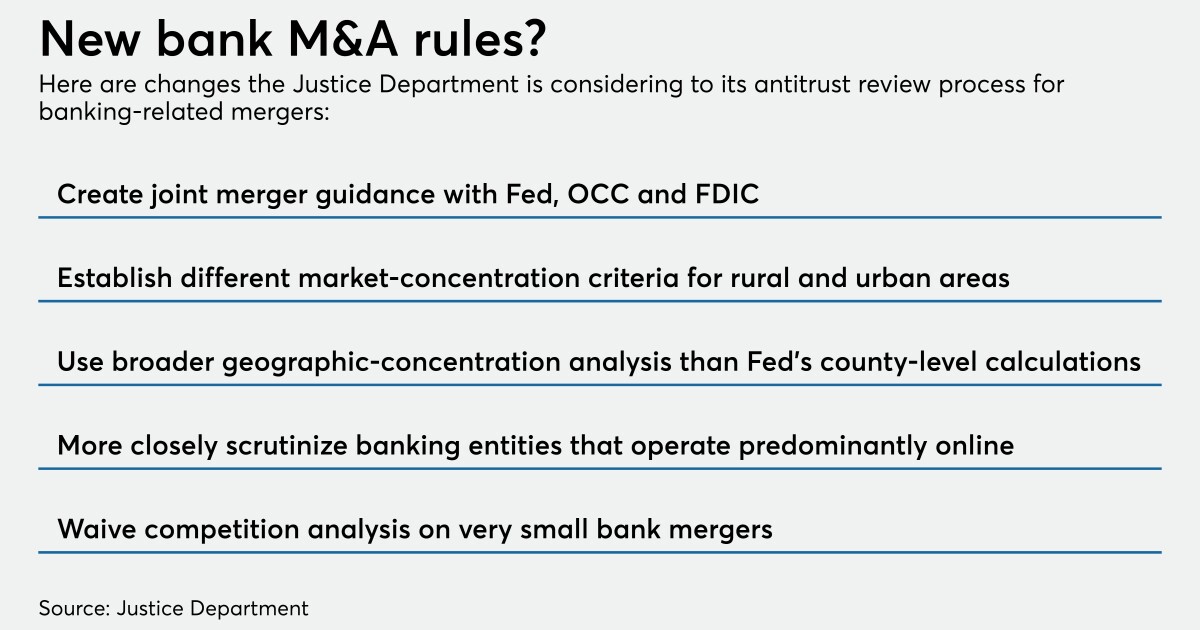 The last time the Justice Department’s antitrust unit changed how it reviewed bank mergers — 1995 — there were more than 10,000 U.S. commercial banks, according to Federal Deposit Insurance Corp. data.

Repeated economic changes and leaps in technology have reshaped the banking map since then, driving many financial institutions to be sold. There are 4,400 commercial banks left.

The fact that this new world was being governed by 25-year-old rules may be a big reason department officials recently announced an overhaul was underway. It’s unclear whether a new antitrust process, which determines whether a proposed merger would give the combined company too much control over a specific market, will slow the consolidation trend.

But M&A specialists, attorneys and industry lobbyists are already predicting that smaller banks could be given a leg up to better compete with bigger rivals and a new breed of financial technology companies.

“We’re encouraged by this,” said Christopher Cole, senior regulatory counsel for the Independent Community Bankers of America. “We think the antitrust guidelines should be reviewed, particularly for mergers in rural markets.”

The Justice Department released more than a dozen questions on Sept. 1, asking stakeholders how the antitrust review process for bank mergers and acquisitions should be changed. The questions include whether greater scrutiny should be given to nontraditional, online lenders; whether separate market-concentration thresholds should be established for rural and urban areas; and whether the definition of what constitutes the market for a product or service should change.

Bank regulators such as the Federal Reserve or the Office of the Comptroller of the Currency review merger applications for management expertise, capital and safety measures and other elements. They also examine the impact on market competitiveness and can refer concerns to Justice’s antitrust division. The division gauges any potential problems using markets defined by the Fed, which usually views them on a county-by-county basis.

Reviewers follow a formula, known as the Herfindahl-Hirschman Index, that determines whether the two banks’ merging custom bases result in too much concentration. If the Justice Department raises red flags about a deal’s impact on the competitiveness of a certain market, based on its HHI score, the banks agree to sell off branches in the area of concern in order to get the deal approved.

But department officials are considering redefining these markets in a way that could make them more lenient, said Jaret Seiberg, an analyst at Cowen Research Group, in a recent note to clients.

The agency is also considering whether online-only players that collect deposits or make loans should count as part of a market’s competition even though these companies may not be physically located there. Such a change could free up more bank deals for approval, while subjecting fintech companies to tougher antitrust standards when trying to break into the industry by buying small banks.

The Justice Department is also asking if consumer and small-business lending should be treated as local businesses or if they should be viewed as national or regional ones, which could expand the markets in question, dilute any potential concentration and prevent antitrust alarm bells from going off.

For “very small” bank deals, the Justice Department has asked whether an automatic process should be created that lets it issue a separate report on “competitive factors” to the lead banking agency vetting a deal instead of conducting a more thorough analysis of the impact in that market.

But even more importantly for smaller banks, department officials are asking whether they should look at deals in rural markets differently.

Cole, at the ICBA, said it has been a problem when regulators have defined markets in a potential deal involving community banks strictly and without considering what competition is brought in from online lenders.

Cole speculates that when the Justice Department had to review the blockbuster SunTrust and BB&T merger that was approved last year, they discovered that current rules were outdated. “When they started applying the 1995 guidelines to that merger, I think they realized this needs to be updated some,” he said. “I think that was the triggering point.”

Lee Bradley, senior managing director at Community Capital Advisers, is in the middle of his own small-bank deal in Atlanta. He agreed that the BB&T-SunTrust merger — which created Truist Financial — may have sparked the need for a review but said the new process is unlikely to impede anything in the works like Morgan Stanley’s acquisition of E-Trade. But, he said, future big-bank agreements to buy fintech companies or any other regional player looking to expand could face extra hurdles.

“It’s probably way overdue because of how banking has changed with technology,” Bradley said.

The Justice Department has given the industry until Oct. 1 to respond to its questions, a month before the presidential election. Antitrust experts are concerned about why the agency would go forward with such an overhaul now and what complications may arise if President Trump loses his reelection bid and a new administration reevaluates any changes that get made.

“Timing here is subject to question,” said Bill Baer, a visiting fellow in governance studies at the Brookings Institution and a former assistant attorney general in charge of the antitrust division at Justice in the Obama administration.

Baer suggested because of the shortened window for comments, it’s likely the department has at least a draft of which changes it would make and release a proposal as early as October. Seiberg in his research note wrote that a new review process is likely to be finalized early next year.

Seiberg said because these technical changes are unlikely to make it easier for big banks to pursue mergers, the overdue effort is likely to survive a change in administration.

“We suspect this is coming from the staff as there is zero political upside to taking any steps that could boost bank M&A,” Seiberg said. “That staff will remain no matter who wins in November. It is why we believe this project will proceed regardless of the election.”