Fashioning a new future for the fashion world 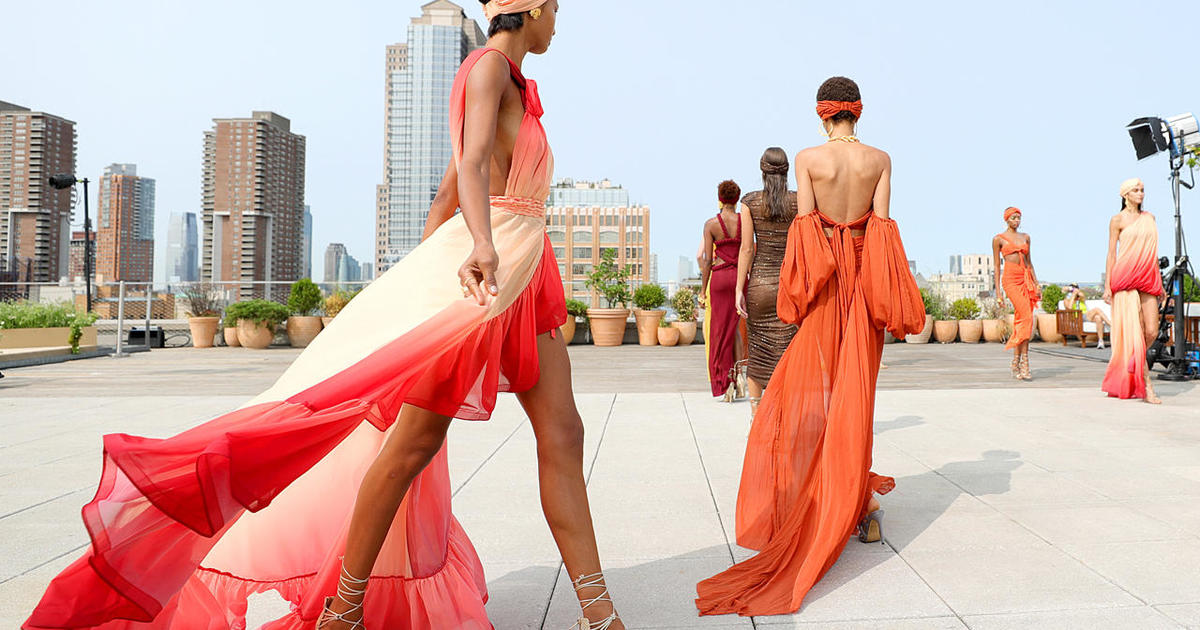 Not even a pandemic could stop New York Fashion Week, though it did look different. This past week the shows went on without the typical fanfare, and with far fewer fans.

Perhaps the biggest change came from some of the biggest designers forgoing Fashion Week all together.

“We wanted to be respectful with what’s happening with everything around us,” said Tory Burch. It isn’t that the designer and her team aren’t working, but in March the chief creative officer of her namesake brand shut down her office and 300 stores worldwide.

“Quite honestly, we were fighting for every bit of business that we could get,” said Burch.

As the U.S. went on lockdown, clothing store sales plunged a record 79%. Retailers struggled to survive; some didn’t.

With work from home the norm for many, pajama sales spiked 133%, slippers at 75%.  Hello sweatpants, goodbye jeans!

Correspondent Alina Cho asked, “Why would anyone want to buy a dress right now?”

“Our sport collection is performing really well,” Burch replied. “But so are our dresses. And people want to go and they want to feel that joy and optimism.”

Of course, during a pandemic, fashion may not seem like a priority to some, but it’s actually a $400-billion-a-year industry, and one, Burch said, that is too big to fail.

Burch even got on the photo with Treasury Secretary Steven Mnuchin with her pitch: “We need to save American jobs. And the fashion industry is close to four million jobs that were at risk. And we weren’t being talked about like the airline industry. We needed to be addressed.”

Dr. Valerie Steele, museum director at the Fashion Institute of Technology, said, “In the Depression, we saw a lot of people who couldn’t afford to buy a new dress. And a lot of dressmakers went out of business. We may see something of the same thing now.”

Dr. Steele said some of the best fashion has come out of tough times: “It was a lot of creative fashion that emerged in 1918, 1919, after the flu epidemic.”

Like the fun flapper dresses of the Roaring 20’s, and Christian Dior’s iconic “new look” – that cinched-waist silhouette that became popular after World War II. “It wasn’t really that new, but it had all been put on ice,” said Dr. Steele. “And so, people were just so excited about looking beautiful and feminine and romantic again.”

Cho asked, “What does the future of fashion look like to you?”

“Fashion will survive,” Dr. Steele replied. “The idea of dressing up, of making yourself look special, seems to be hard-wired into human beings. That’s the good news. The bad news is that it’s gonna be tough.”

It’s already been tough. One of the nation’s oldest department stores, Lord & Taylor, announced it is closing all stores.

At least 15 major apparel companies have filed for bankruptcy, including JCPenney, Brooks Brothers, and Neiman Marcus – a direct competitor to Saks Fifth Avenue.

Marc Metrick, president and CEO of Saks, temporarily closed all 40 of his stores.

Cho asked, “What’s taken a hit during this period?”

“The evening gowns, anything you’d wear to a formal event,” Metrick replied.

Now, he says, business is sound. Customers are buying handbags and pumps. “Can you imagine? We are the comfort food of fashion!” he laughed. “We are the splurge.”

As other menswear brands are folding, Men’s at Saks is performing unexpectedly well.

“It’s a Zoom call world, and it’s a more casual world,” Metrick said. “You made it when you had the suit with the tie and the hat – this is in the ’60s. Uniformity meant success. Now, it’s the opposite.”

The pandemic has prompted a homecoming of sorts for Tracy Reese and her sustainable brand, Hope for Flowers.

“The buyers are like, anything without a fitted waist is doing well!” Reese said. “I’m questioning every piece. Like, would I wear this? Will my customer have a use for this?”

In March, the veteran designer closed up shop in New York and moved back to her native Detroit. She now works from home.

“It’s been my plan for the past two years to make Detroit the home base for my business,” she said. “And COVID really escalated those plans.”

Something else Reese hadn’t counted on was a national reckoning on race, an issue that’s deeply personal. “I was not a favorite of certain fashion editors. It’s more challenging to get financing. The list goes on and on,” she said.

Reese said, “I think that Black vendors have historically been shut out of these opportunities. We are not stakeholders in this industry.  This cannot just be a trend. And the fashion industry is notorious for cycling through trends.”

Around the country sales are slowly picking up pace as stores reopen, include Tory Burch.

Cho asked, “How busy are the stores?”

“It’s probably down 45%, but what’s interesting is that conversion is up,” Burch said. “They are shopping and they’re buying more than ordinarily they would.”

Burch and part of her team are back in the office, finishing her new collection that will debut digitally this fall – inspired by and created entirely on lockdown.

“Do you envision a day where maybe this becomes a little more of the norm?” asked Cho.

“I’m not sure who said it first, but you never waste a good crisis,” Burch replied. “I mean, there’s so much darkness around, with so many tough things, I think to have the ability to escape and dream is everything.”