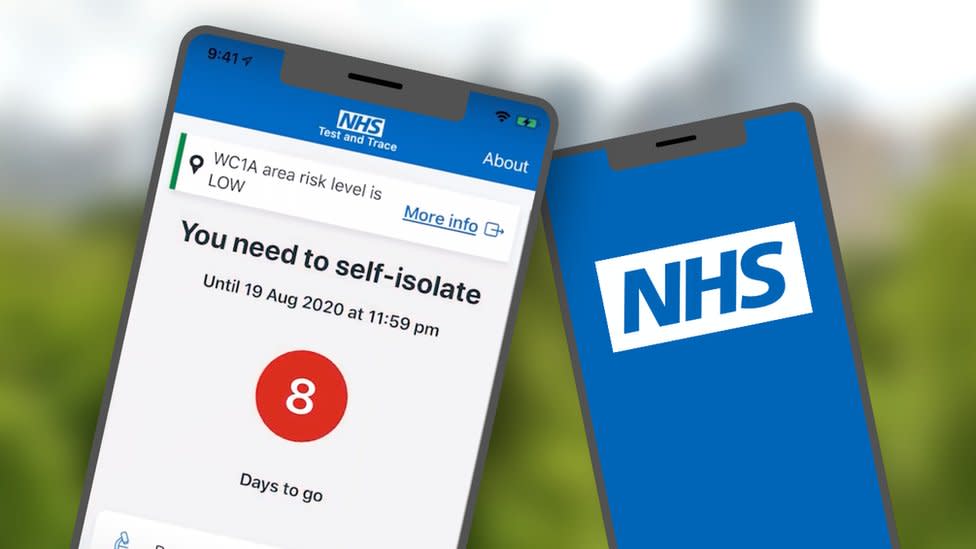 A new Covid-19 contact-tracing app will be launched across England and Wales on 24 September, the government has announced.

The app will let people scan barcode-like QR codes to register visits to hospitality venues and will implement Apple and Google’s method of detecting other smartphones.

Businesses are being asked to display QR code posters to support the app.

The first version of the NHS contact-tracing app, intended for the whole of the UK, was trialled on the Isle of Wight in May but later abandoned.

“We need to use every tool at our disposal to control the spread of the virus including cutting-edge technology,” said Mr Hancock.

“The launch of the app later this month across England and Wales is a defining moment and will aid our ability to contain the virus at a critical time.”

According to the latest figures published by the Office for National Statistics, there were an estimated 3,200 new cases a day in England during the first week of September, compared with 2,000 the week before.

Some hospitality venues have already been using their own QR code-based systems for test and trace but are now being asked to switch to the NHS version instead.

Universities, hospitals, leisure premises, civic centres and libraries are being asked to display posters in communal areas such as cafes, where people gather for longer than 15 minutes.

An alternative system, such as a handwritten register, must also be maintained for visitors who do not have smartphones, the Department of Health and Social Care said.

Welsh Health and Social Services Minister Vaughan Gething said launching a joint app with England was “the most practical option”.

He added that the move reflects “movement across our shared border”.

“It makes sense to use the same app, working in exactly the same way, regardless of which country you’re in.”

It has had a long and troubled gestation but the team behind the NHS Covid-19 app are hoping that they’ve finally got it right at a time when it can make a significant contribution to limiting the spread of the virus.

Back in April, an app seemed to be a key weapon in the government’s armoury but since Baroness Dido Harding took over the Test and Trace programme, it’s been relegated to the “cherry on the cake”.

Around the world there are still doubts amongst those working on contact tracing apps about just how good Bluetooth is as a way of measuring the distance between people.

But the fact that pubs, restaurants and other hospitality businesses are now being told they have to do a better job of logging contact details of visitors presents an opportunity.

They may now see having QR codes for visitors as a simple way of complying with the rules, and that could encourage take-up of the app.

Scotland launched its own app on Thursday that has already been downloaded nearly 600,000 times.

The Protect Scotland app informs people if they have been in close contact with someone who later tests positive.

Northern Ireland was the first part of the UK to launch a contact-tracing app – StopCOVID NI was officially launched at the end of July.

In England, from Monday, social gatherings will be limited to up to six people – in a measure dubbed “the rule of six”.

It has been criticised by some Conservative MPs who have said it should be subjected to more parliamentary scrutiny.

Scotland and Wales – which along with Northern Ireland have devolved powers to set their own coronavirus restrictions – also reduced the size of social gatherings to six people from Monday.

In Scotland, children under the age of 12 will not count towards the total, and in Wales the rule will not apply to children under 11 and up to 30 people can still meet outside.

The new measures followed a sustained rise in coronavirus cases, with over 2,000 positive cases recorded across the UK on five consecutive days this week.