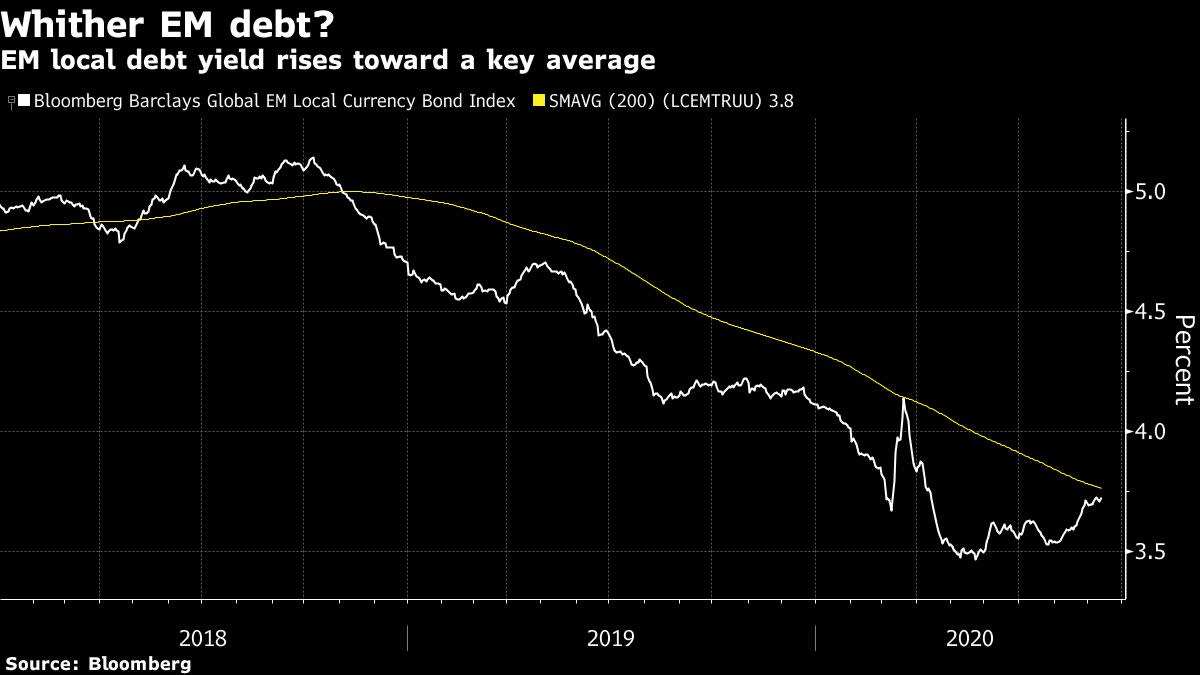 (Bloomberg) — September is shaping up to be the month when the dial on the interest-rate compass no longer pointed so markedly south for the world’s developing economies.

Of the six major emerging-market central banks due to decide policy in the coming week, only one — South Africa’s Reserve Bank — is forecast to lower borrowing costs, extending a pattern that saw Malaysia, Peru, Ukraine and Chile keep rates unchanged this month.

The diminishing willingness of policy makers to reduce interest rates — not to mention their scope to do so — underscores the growing recognition across the developing world that after the wave of stimulus thrown at these economies amid the Covid-19 pandemic, inflation is edging up again. It’s a realization illustrated by a surge in demand for emerging-market inflation-linked bonds, which has driven yields on some notes to all-time lows.

For BNP Paribas SA, the absence of a strong carry story as the policy-easing cycle comes to an end means the focus must be on finding value. The bank is cutting its exposure to Brazilian rates and credit while reducing its allocation in developing-nation sovereign credit to almost zero in its recommended model.

“Despite supportive financial conditions and ample dollar liquidity, the risk-reward of maintaining a substantial long allocation in emerging-market risk assets is no longer attractive,” Gabriel Gersztein, the Sao Paulo-based head of global emerging-markets strategy at BNP Paribas, wrote in a report. “We have now switched to a more selective approach, in which idiosyncratic factors and political events play an increasingly important role in our trading choices.”

And there are plenty of country-specific risks to consider. Moody’s Investors Service on Friday cut Turkey’s debt to the lowest grade it’s ever given the country, warning of a possible balance-of-payments crisis. In Peru, President Martin Vizcarra is pushing back on an impeachment attempt that made the sol last week’s biggest decliner in emerging markets. And Russian President Vladimir Putin, grappling with the fallout from the alleged poisoning of opposition leader Alexey Navalny, is tightening his embrace of Belarus President Alexander Lukashenko as the dictator intensifies a crackdown on protests.

Emerging-market stocks ended a bad week on a high note Friday amid a selloff in U.S. tech stocks. Indexes of currencies and bonds were little changed as some investors geared up for the Federal Reserve’s two-day policy meeting starting Tuesday.

With South Africa’s economy mired in the longest recession since 1992, the majority of economists are predicting a 25-basis-point reduction in interest rates on Thursday to round off a cycle that’s already seen five cuts totaling 300 basis points this yearThe nation reports retail sales for July a day earlierThe rand’s three-month implied volatility against the dollar rose for a third week in the five days through Friday, the longest run since MarchThe Bank of Russia will probably keep benchmark borrowing costs unchanged on Friday“Optimism about the pace of recovery lessens the urgency for another rate cut, while the slide in the ruble might prompt concerns about financial-market stability,” Bloomberg Economics said in a reportRussia reports PPI for August on Wednesday, followed by gold and forex reserves on ThursdayPoland will likely hold interest rates at a meeting TuesdayThe nation’s current-account balance probably narrowed in July as exports rose more than imports, data may show MondayPoland also reports inflation data for August on Wednesday, employment and wages on Thursday and producer prices on Friday

The rupiah was the worst performer in the Asian sphere last week in the wake of the renewed lockdown measures in Jakarta, despite the central bank’s pledge to defend the currency

The Taiwanese dollar has stayed around the 29.5 level over the past week, although intra-day moves continued to widen

Brazil’s central bank will probably keep the key policy rate unchanged at 2% Wednesday, and investors will analyze the recently established forward guidance for clues on how long rates will remain at a record low

Latin America’s biggest economy will also release tax-collection figures for August this week.Minutes from Chile’s September central bank meeting might suggest the possibility of slowly increasing interest rates at the end of its two-year forecast period, though policy makers will probably maintain a dovish tone and reiterate their commitment to provide additional accommodation if needed, according to Bloomberg Economics

Turkish markets may be under pressure Monday after Moody’s cut its credit rating to B2, five levels below investment grade and on par with Egypt, Jamaica and RwandaThe nation’s standing with investors has suffered as its leader, Recep Tayyip Erdogan, pursued an approach that prioritized growth. The nation’s credit-default swaps, local-currency debt and the lira have been the worst performers in emerging markets this quarterTurkey provides data on industrial production on Monday, home sales and the budget balance on Tuesday and net bond investments by foreigners on Thursday

China is expected to report on Tuesday the recovery in industrial production accelerated in August from a year earlier, along with some improvements for retail sales and fixed assets investment

China’s 10-year government bond yields edged down on the week as risk aversion gripped local equity marketsIndia releases inflation data on Monday with August CPI seen remaining above the central bank’s tolerance. High CPI has stalled the Reserve Bank of India’s rate-cutting cycle and has been identified as the rationale behind the central bank’s acceptance of a stronger rupeeAugust trade data due Tuesday is forecast to show a further swing into deficitThe second-quarter current account likely to be released Tuesday onwards may show a sharp increase in surplusThe rupee was the second-worst performing currency in Asia last weekThe Philippines releases overseas workers’ remittances for July on TuesdayArgentine consumer price inflation data, to be released on Wednesday, may flag an uptick in August, according to a Bloomberg Economics estimate. Budget-balance information for the same month is also dueColombia is expected to post retail sales and industrial production figures for July on Monday, which may show signs of a recovery in economic activity, according to economists surveyed by Bloomberg.In Uruguay, a reading of second-quarter gross domestic product is scheduled for release. The nation’s bonds are the best performers in emerging markets this year, according to a Bloomberg Barclays index of dollar debt.BinDawood Holding Co., one of Saudi Arabia’s largest grocery chains, is seeking to raise as much as $585 million from a share sale that started Sunday