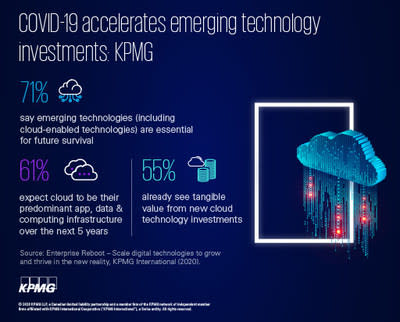 TORONTO, Sept. 10, 2020 /CNW/ – Seven out of 10 Canadian technology executives say that emerging technologies are essential to their organization’s future survival, according to a recent report by KPMG International and global industry analyst firm HFS Research.

Yet, they are under investing in disruptive technologies compared to their U.S. peers, finds the Enterprise reboot report which explores both the investment and progress in adopting 5G, artificial intelligence (AI), blockchain, edge computing, hybrid and/or multi-cloud, process automation, and smart analytics.

U.S. companies currently spend on average US$17 million per technology – 30 per cent more than what Canadians spend – underscoring the importance they place on the agility and competitive edge that disruptive technologies can deliver to the organization.

“We’re starting to see a sea-change in how the C-suite views technology because of the COVID-19 pandemic, with over four in five Canadian CEOs now prioritizing technology investments,” says Stephanie Terrill, business unit leader, management consulting, KPMG in Canada. “Canadian CEOs recognize they need to make the right investments to help them build resilience and emerge stronger from this crisis.”

KPMG’s recent Global CEO Outlook found that 84 per cent of Canadian CEOs are now prioritizing their technology investments to meet growth and transformation objectives, and the vast majority (92 per cent) say COVID-19 has accelerated the digitization of their operations.

The Enterprise reboot report notes that CTOs in Canada say that the main barriers for investing in emerging technologies are fear the technology won’t work, challenges in changing the organizational culture, and the lack of talent or skillset in implementing the technology to achieve business outcomes.

The report also finds that Canadian and American companies differ in their digital transformation objectives. Canadians cited “cost reduction” and “improving decision making” as their top reasons for investing in emerging technologies. By contrast, their U.S. counterparts identified “future survival” and “business model transformation” for investing in emerging technologies. On both sides of the border, “improving brand value” was a common goal.

Six in 10 (63 per cent) technology executives in Canada believe that the combined use of emerging technologies is much more beneficial than using any of these technologies in isolation. But, that’s significantly below the 75 per cent of U.S. respondents who see a benefit in the power of multiple technologies.

Cloud on the rise

The report also finds that hybrid or multi-cloud, which refers to the use of both private and public cloud services, will become the predominant app, data, and computing infrastructure over the next five years. Six in 10 (61 per cent) respondents in Canada hold this view, compared to 70 per cent in the U.S.

And, more than half (56 per cent) of respondents in the U.S., U.K., and Germany called cloud migration “an absolute necessity” due to COVID-19, underscoring the growing importance of cloud transformation.

“The shift to working from home and dealing with customers online is motivating companies to embrace cloud solutions,” says Amardeep Johar, partner and head of KPMG in Canada’s cloud-based Powered Enterprise team. “The cloud helps organizations to be more agile in response to their customer needs, scale quickly to meet market demand, and operate more securely.”

Indeed, more than half (55 per cent) of Canadian technology executives say they are already seeing tangible value to the business from their hybrid cloud and/or multi-cloud investments.

The research also points out that for Canadian companies, one of the most-important advantages for deploying the cloud is so-called “containerization” in which software code is packaged or encapsulated into a “container” that is separate and portable from the host operating system and can run uniformly and consistently across any platform or cloud, free of issues.

About the Enterprise reboot survey

Between March and June, KPMG International and HFS Research surveyed 900 technology executives at enterprises with more than US$1 billion in annual revenue across nine countries, including Australia, Canada, France, Germany, India, Japan, Netherlands, the U.K. and the U.S. In Canada, 48 technology executives were surveyed in March and April during the COVID-19 economic lockdown. Survey data was supplemented by qualitative interviews with enterprise leaders who oversee the investment and adoption of these emerging technologies in their organization.

ABOUT KPMG IN CANADA
KPMG LLP, an Audit, Tax and Advisory firm (home.kpmg.ca) is a limited liability partnership, established under the laws of Ontario, and the Canadian member firm of KPMG International Cooperative (“KPMG International”). KPMG has more than 7,000 professionals/employees in over 40 locations across Canada serving private- and public-sector clients. KPMG is consistently recognized as an employer of choice and one of the best places to work in the country.

The independent member firms of the KPMG network are affiliated with KPMG International, a Swiss entity. Each KPMG firm is a legally distinct and separate entity and describes itself as such.