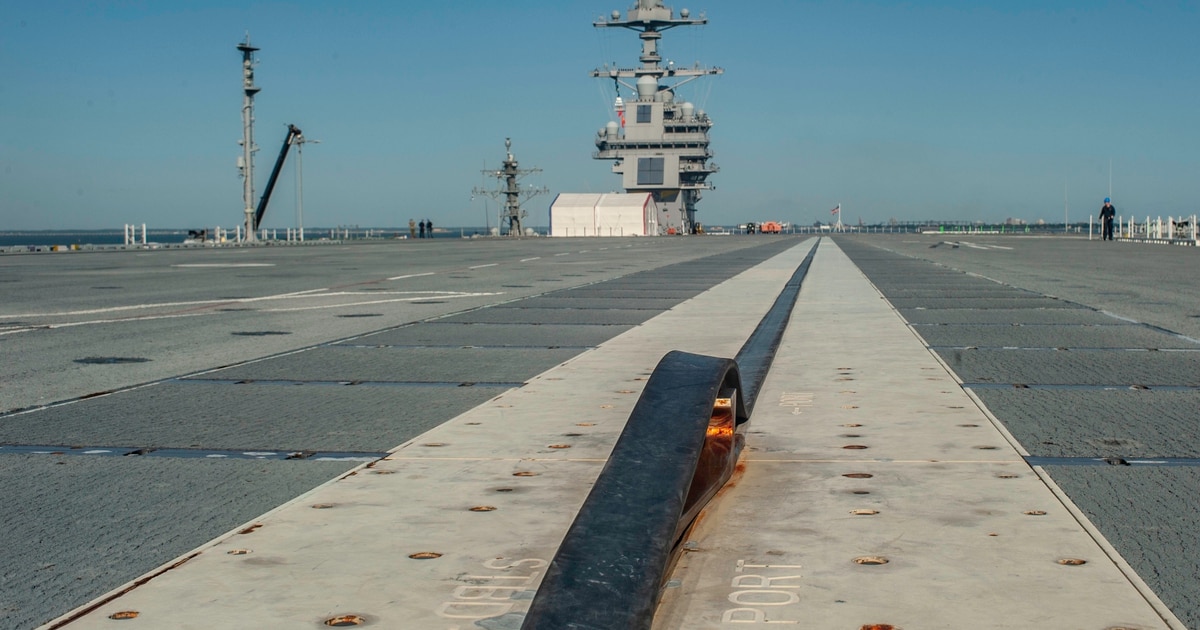 In order for the U.S. to meet whatever threats the future may hold, all branches of our military must commit themselves daily to improving war-fighting capabilities — in part by developing and leveraging the latest and greatest technology of our time. In the Navy, this sentiment is embodied in the next-generation Ford-class aircraft carriers, which will continue to project American strength around the globe for the next half century, just as our carriers have done for decades.

The U.S. Navy has always led the way in developing new and innovative technology. In 1794, when Congress commissioned the first six warships to make up the new nation’s fleet, Joshua Humphreys’ radical design incorporated Southern live oak (so dense it does not float) in an unusual hull design with a narrow beam and a deep, elongated hull. Some had their doubts, but the results gave us “Old Ironsides.”

When Lt. Theodore Ellyson made the first successful shipboard catapult launch from a coal barge in 1912, it was the result of many developmental mishaps which almost cost him his life. When the submarine Nautilus was commissioned in 1952, it incorporated a beyond state-of-the-art submarine thermal reactor, the first of its kind requiring no air to operate. Innovation and leading-edge technology is in the U.S. Navy’s blood.

True to its legacy, the U.S. Navy’s Ford-class carriers offer gamechanging advancements over previous Nimitz-class carriers. One of the most revolutionary technologies of the Ford carrier is the Electromagnetic Aircraft Launch System, or EMALS, that is currently equipped on the aircraft carrier Gerald R. Ford and is being integrated on the next two Ford carriers currently under construction.

This system has had its initial detractors and has been the subject of some debate as technical challenges were identified and overcome. Implementing ground-breaking, new innovations and capabilities has never been easy — but this is hardly an excuse not to pursue advancements that will help provide us with significant tactical and strategic advantages for the next 50 years.

For example, when fully optimized, EMALS will go from a cold start to launch-ready in about 15 minutes. Steam catapults take hours and significantly more nuclear energy to achieve the same level of readiness — and deplete the ship’s critical fresh water resources to operate.

As such, EMALS will enable Ford-class carriers to accommodate 160 sorties per day during normal conditions and an anticipated 270 during wartime operations. This is an almost 33 percent increase in sortie deployment capability from the Nimitz-class carrier’s capability during peacetime, and a 12.5 percent increase during wartime. This represents a drastic increase in the lethality and effectiveness of the ship.

Additionally, EMALS will provide Ford-class carriers with the critical new ability to launch pilotless drones, which can make a life or death difference to deployed troops in harm’s way, as well as newer and heavier aircraft that steam cannot launch, allowing for a much more diverse naval air wing in the future.

Moreover, EMALS will improve the lifespan of the aircraft it launches. Due to its “triple-redundancy” safety interlocks, the risk of a “cold” cat-shot is all but eliminated, helping to keep our pilots safe. It has the ability to adjust and control the power needed to launch each aircraft at the precise end speed it requires, reducing wear and tear on both the aircraft and the ship, and giving commanders operational flexibility with “downwind” operations; in layman’s terms, allowing aircraft to be launched without repositioning the ship according to the direction of the wind.

Our naval aviators are also reporting significantly improved experience over a steam launch, and in addition to the pilots, the life of the crew on the ship is improved, as EMALS produces far less noise and takes up less space than steam catapults.

Any new, complex technology of this magnitude will encounter developmental challenges on the front end. Back in 1903, the Wright brothers endured many failures before successfully demonstrating powered flight. Lt. Ellyson almost died in his first attempt at a catapult launch in 1912. The unprecedented capabilities offered by EMALS will guarantee a more prepared and capable Navy in the future.

Navy leadership knows the importance of developing new technologies, which is why they made the strategic decision to pursue this technology and to make the switch from steam to electromagnetic catapults 20 years ago. EMALS on all four planned Ford-class carriers just makes sense, now and in 2071.

The U.S. Navy is the world’s most dominant seafaring force, and our sailors are second to none. The spirit of innovation embraced by the Navy and embodied in new technologies like EMALS and others on Ford-class carriers will ensure it remains admired by our allies and feared by our adversaries for years to come.