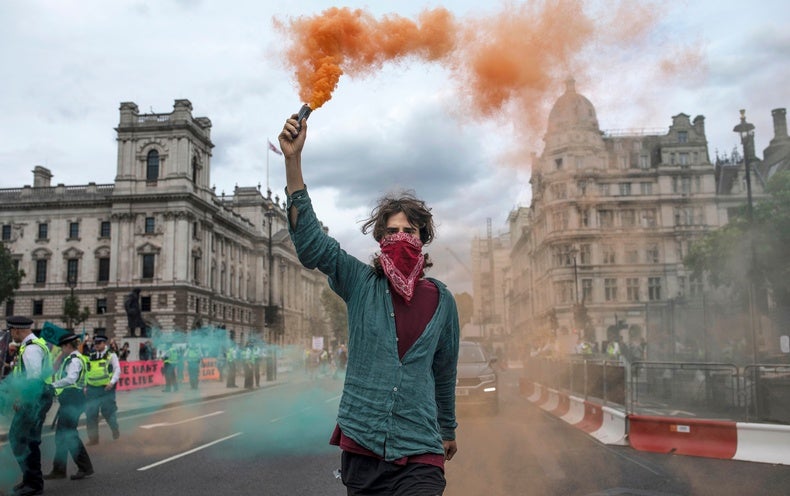 Scientists just completed one of the most comprehensive investigations of Earth’s climate history—and the findings aren’t favorable.

They found that the planet could eventually warm to levels it hasn’t reached in at least 34 million years.

The researchers, led by Thomas Westerhold of the University of Bremen in Germany, constructed datasets using chemical analyses of ancient sediments, drilled from the bottom of the ocean. These sediments, some of which are 66 million years old, are filled with the preserved shells of tiny organisms that can tell scientists about the temperature and chemical composition of the ocean when they were formed.

The sediments, collected from around the world over the course of many years, allowed the researchers to reconstruct Earth’s climate history going back to the mass extinction that killed three-quarters of the planet’s species, including dinosaurs.

They found that the planet has passed through four distinct climate phases: warmhouse, hothouse, coolhouse and icehouse states.

Transitions from one state to another have generally depended on changing greenhouse gas levels, often driven by volcanic eruptions and other natural processes, and shifts in the Earth’s orbit that affected the amount of solar energy reaching the planet.

In the hottest phases, more than 50 million years ago, temperatures on Earth were more than 10 degrees Celsius hotter than they are today. But it’s important to note that it took the planet thousands or even millions of years to reach these levels—and that was long before humans ever walked the Earth.

That’s in stark contrast to the kind of climate change that human activity is driving today.

For several million years now, the world has been in an icehouse state. But that’s quickly changing. If human societies do nothing to curb their greenhouse gas emissions, in just a few centuries the Earth could once again reach a temperature threshold not seen for at least 34 million years.

Before the industrial era, such a magnitude of warming would have taken thousands of years to occur, at least.

“If you look at the worst-case scenario [by 2300], the change in mean global temperature is larger than most of the natural variability going back over the last 66 million years related to changes in the Earth’s orbit,” said Jim Zachos, a paleoclimatologist at the University of California, Santa Cruz, and a co-author of the new study, which was published Thursday in the journal Science.

It’s not an inevitable future. With immediate and stringent action to reduce climate change, the world can keep global temperatures from rising more than a few degrees above their preindustrial levels.

But the study does warn that without these efforts, Earth is on track for some of the strongest, fastest climate change the planet has ever experienced.

The study may also provide some important insights into how climate change could unfold in the coming decades and centuries.

Earth’s climate doesn’t always shift in linear, predictable ways. There are all kinds of feedback processes that can speed things up or slow things down—such as the speed at which glaciers and sea ice melt or the way that clouds change in response to future warming.

In the ancient past, for instance, the study suggests that the world’s ice sheets played an important role in regulating the pace and predictability of the Earth’s climate response to natural changes in greenhouse gases or orbital shifts. Today, scientists believe that the world’s melting ice may also have a big impact on future climate change.

These kinds of feedback processes can make it challenging to predict future change, especially over relatively short periods of time.

Reconstructing the Earth’s long-term climate history can help scientists test the models they use to predict its future. If a model can accurately simulate the past, scientists may have more confidence in its ability to simulate present-day climate processes.

“That’s the beauty of this record,” Zachos said. “It’s something we’ve always wanted to have because of the applicability to testing climate theory.”

Reprinted from Climatewire with permission from E&E News. E&E provides daily coverage of essential energy and environmental news at www.eenews.net.