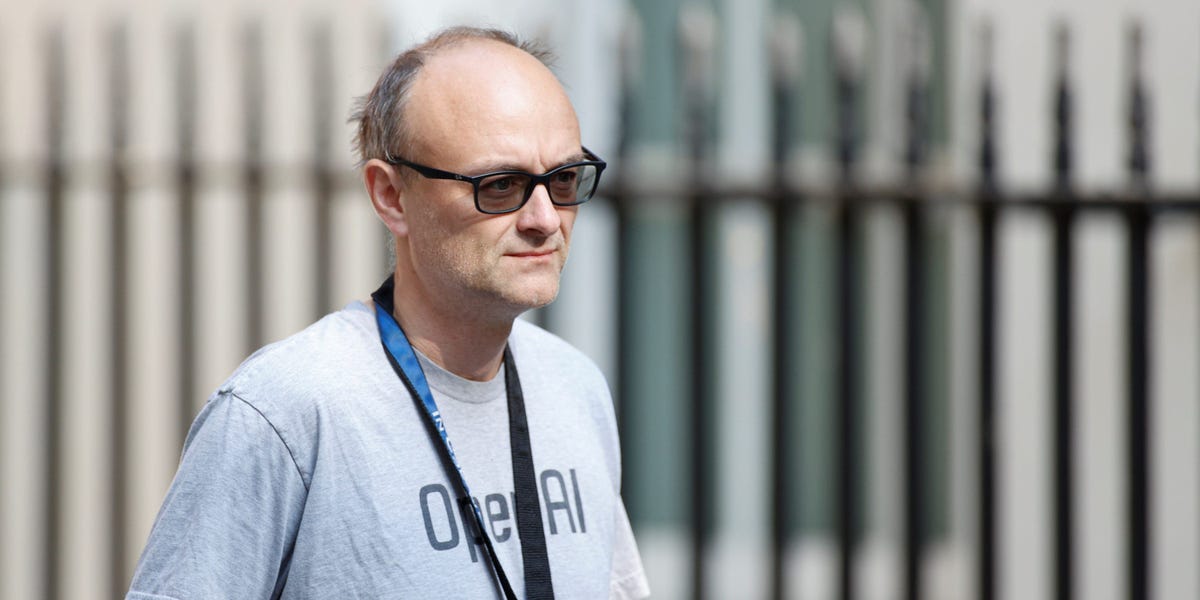 UK Prime Minister Boris Johnson’s top adviser, Dominic Cummings, sees a looming no-deal Brexit as a chance for the government to fund a technology giant akin to Google or Facebook.

One insider at the Department of Digital, Culture, Media and Sport (DCMS) told Business Insider there were “rumblings that Dom had visions of a new trillionaire tech giant in the UK.”

In an email to DCMS staffers this week, Cummings also said he was looking at “ways we can build [$1 trillion] tech companies” in the UK, the source said.

Cummings believes a no-deal Brexit would let the UK government subsidize future technology champions directly without falling foul of the EU’s state aid rules, as political journalist James Forsyth reported in a column for The Times.

But Cummings’ framing of a prospective no-deal as beneficial to tech has taken the industry by surprise. Many entrepreneurs and investors spoke out against leaving the European Union immediately after the 2016 referendum.

“It’s a very niche idea,” one tech industry source with connections to Number 10 told Business Insider. “It’s not something that is on the minds of anyone in the tech sector. I don’t think it’s totally crazy, but it’s got almost nothing to do with startups or existing tech companies either.”

The prospect of a no-deal Brexit is back on the table: The Financial Times revealed on Sunday that Boris Johnson plans to tear up part of the UK’s current withdrawal agreement with the EU. The EU warned reneging on this agreement could wreck ongoing trade talks, boosting the chances of a no-deal.

Cummings not in touch with British startups

The tech industry source and a well-connected tech lobbyist both said that Cummings was not in regular contact with leading figures in the UK startup ecosystem. Instead, Cummings is thought to rely on his own reading around technology and a small cabal of close advisors. “Cummings is not really a startup guy,” one of them said.

These advisers include Marc Warner, CEO of AI company Faculty, and his brother Ben Warner, a data scientist who helped the Conservatives win the 2019 election. Former civil servant Tom Shinner, who ran the government’s pandemic response before leaving in July, is also influential, according to one of the sources.

Both sources said the concept of building a trillion-dollar technology company stemmed from Cummings’ obsessions with the British artificial intelligence research firm DeepMind, now owned by Google, and British semiconductor firm ARM, set to be sold by its current Japanese owner SoftBank to US firm Nvidia.

“People around Cummings feel it was a disaster of historic proportions to allow Google to buy DeepMind, and that the government should have bought it or allowed it enough capital to operate independently,” the industry source. “These two examples weigh very heavily.”

The lobbyist added that Cummings’ logic is flawed, since DeepMind has yet to demonstrate long-term commercial value and, insiders say, is even considered as a kind of costly in-house university by Google staff.

“It’s the choice between Google subsidizing R&D to the tune of nearly $1 billion with no clear financial benefit or even benefit to society …. Does Google do that, or does the taxpayer do it?” they said, referring to DeepMind’s ongoing financial support by its parent. “Are we assuming the UK government is a better custodian than Google? It’s a bit of a simplistic way of thinking about technology.”

Both sources said Cummings was correct that state aid rules had sometimes prevented the government or government-backed entities from putting money directly into tech firms. For example, the UK’s state-funded innovation agency, Innovate UK, is limited in the way it can issue grants to prospective tech champions, one of the people said.

“You can imagine a world where without state aid, the government could say [it will] pick the most 25 most radical scientific breakthroughs in UK universities, turn them into companies, give them a $10 million open-ended grant and allow them to be national winners in this space. You can’t currently do that.”

But both said the benefit of circumventing state aid rules would not make up for the damage of a no-deal Brexit. Lobbying body TechUK says a no-deal Brexit would create headaches for emerging tech firms around international data transfers, the industry’s reliance on highly skilled EU immigrants, and expansion into European countries.

And former civil servant Martin Stanley, who is experienced in using government funding to boost tech, wrote in a blog post this week that he has “no faith” that ministers will withstand pressure to “spend unwisely for political and constituency reasons.”

“Such powers need to be tightly controlled (such as via the state aids regime) if they are not to degenerate into hugely wasteful expenditure in uncompetitive companies and/or international auctions which end up in governments paying far too much per job gained,” he wrote.