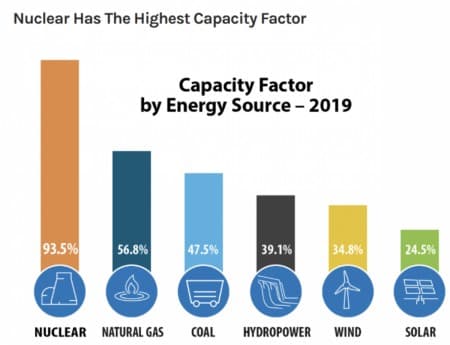 For decades, the nuclear energy sector has been regarded as the black sheep of the alternative energy market thanks to a series of high-profile disasters such as Chernobyl, Fukushima, and Three Mile Island. But recently, the sector has received the backing of the Trump administration, which has sought a $1.5B bailout of America’s flagging uranium industry in a bid to create sufficient federal stockpiles for national security purposes.

Yet, nuclear energy could soon receive yet another shot in the arm that might significantly improve its standing in the eyes of the public: Substituting thorium for dangerous uranium in nuclear reactors.

Thorium is now being billed as the great green hope of clean energy production, producing less waste and more energy than uranium. Thorium is meltdown-proof, has no weapons-grade by-products, and can even consume legacy plutonium stockpiles.

The United States Department of Energy (DOE), Nuclear Engineering & Science Center at Texas A&M, and the Idaho National Laboratory (INL) have partnered with Chicago-based Clean Core Thorium Energy (CCTE) to develop a new thorium-based nuclear fuel they have dubbed ANEEL. ANEEL, which is short for “Advanced Nuclear Energy for Enriched Life” is a proprietary combination of thorium and “High Assay Low Enriched Uranium” (HALEU) that hopes to solve some of nuclear’s knottiest problems, including high costs and toxic wastes.

ANEEL can be used in traditional boiling water and pressurized water reactors but performs best when used in heavy water reactors. More importantly, ANEEL reactors can be deployed much faster than uranium reactors.

A key benefit of ANEEL over uranium is that it can achieve a much higher fuel burn-up rate to the tune of 55,000 MWd/T (megawatt-day per ton of fuel) compared to 7,000 MWd/T for natural uranium fuel used in pressurized water reactors. This allows the fuel to remain in the reactors for much longer, meaning much longer intervals between shutdowns for refueling. For instance, India’s Kaiga Unit-1 and Canada’s Darlington PHWR Unit hold the world records for uninterrupted operations at 962 days and 963 days, respectively.

The thorium-based fuel also comes with other key benefits. One of the biggest is that a much higher fuel burn-up reduces plutonium waste by more than 80%. Plutonium has a shorter half-life of about 24,000 years compared to Uranium-235’s half-life of just over 700 million years. Plutonium is highly toxic even in small doses, leading to radiation illness, cancer, and often death. Further, thorium has a lower operating temperature and a higher melting point than natural uranium, making it inherently safer and more resistant to core meltdowns.

There is more than twice thorium in the earth’s crust than uranium; In India, thorium is 4x more abundant than uranium. It can also be extracted from seawater just like uranium, making it almost inexhaustible.

ANEEL could soon become the fuel of choice for countries that operate CANDU (Canada Deuterium Uranium) and PHWR (Pressurized Heavy Water Reactor) reactors such as China, India, Argentina, Pakistan, South Korea, and Romania. These reactors are cooled and moderated using pressurized heavy water. Another 50 countries (mostly developing countries) have either started nuclear programs or have expressed an interest in launching the same in the near future. Overall, only about 50 of the world’s existing 440 nuclear reactors can be powered using this novel fuel.

Nuclear energy is enjoying another mini-renaissance of sorts.

Trump is not nuclear’s only friend: The sector has also been receiving a fresh endorsement from an unexpected source: the Covid-19 pandemic.

The ongoing energy crisis has been helping to highlight nuclear energy’s billing as the most reliable energy source, which ostensibly gives it a serious edge over other renewable energy sources such as wind and solar that exist at the lower end of the reliability spectrum.

Meanwhile, Unite, Britain and Ireland’s largest union, has backed the UK’s Nuclear Industry Association (NIA) call for massive nuclear investments by saying that comprehensive investment in the nuclear industry will be necessary to kickstart the UK’s post-pandemic economy, while also fulfilling the EU’s goal to decarbonize all its industries by 2050.

Last year, EU leaders recognized nuclear energy as a way to fight climate change but have mainly touted a hydrogen economy in their latest topline targets.

Given heavy public backlash, however, it remains highly doubtful whether nuclear energy can really make a significant comeback here in the United States. Still, the U.S. will probably have a ready market for its new thorium fuel since it has signed bilateral nuclear treaties–including the 1-2-3 Agreement–related to security, weapons nonproliferation, and nuclear materials with no less than 48 countries.

However, it still remains to be seen whether the new thorium fuel will actually see the light of day.

The main sticking point to the promotion of thorium as a cleaner nuclear fuel is that it remains unproven on a commercial scale. Thorium MSRs (Molten Salt Reactors) have been in development since the 1960s by the United States, China, Russia, and France, yet nothing much ever came of them.

Nuclear radiologist Peter Karamoskos, of the International Campaign to Abolish Nuclear Weapons (ICAN) has advised the world not to hold its breath:

“Without exception, [thorium reactors] have never been commercially viable, nor do any of the intended new designs even remotely seem to be viable. Like all nuclear power production they rely on extensive taxpayer subsidies; the only difference is that with thorium and other breeder reactors these are of an order of magnitude greater, which is why no government has ever continued their funding.”

Nuclear power enthusiasts can only hope that ANEEL will not also fall victim to the thorium curse.

By Alex Kimani for Oilprice.com

This story originally appeared on Oilprice.com