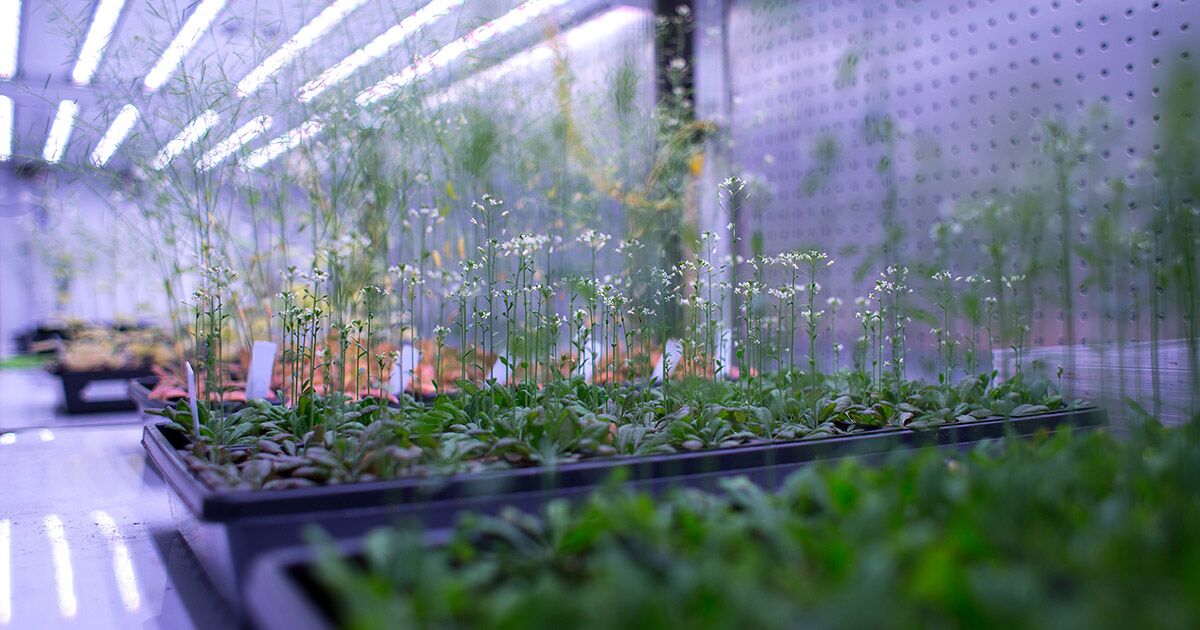 Perched atop a bluff overlooking the Pacific in La Jolla, Calif., the greenhouses where Joanne Chory’s plants are growing seem a touch extravagant for Arabidopsis thaliana, a small flowering piece of greenery that often blooms by the roadside. Technically, it’s a weed.

But Chory, 65, a plant biologist with a halo of snowy white hair, has big ambitions for these scrawny creations. By genetically engineering these weeds to grow unusually deep with hefty root structures, rich in an impermeable corklike polymer called suberin, Chory and her team at the Salk Institute for Biological Studies are attempting to vastly increase the amount of carbon dioxide each of these plants sucks out of the air and buries underground.

If they can replicate these qualities in wheat, corn, soy, rice, cotton, and canola—which together occupy more than half of Earth’s arable land—Chory and her colleagues believe they might just save the world. “Our ecosystems are collapsing,” she says. “Our action or inaction in the next 10 years will determine our fate on this planet.”

The urgency was on display as smoke from California’s worst wildfire season darkened the sky just north from where Chory is growing the bionic plants. She and her colleagues have begun selling their plan to some of the world’s leading seed distributors, dispatching researchers to deliver talks at companies such as Monsanto Co., and launching informal discussions. They’re currently finalizing their first collaboration with a partner (Chory wouldn’t identify it, since contracts aren’t yet signed) to begin engineering carbon-sucking superpowers into strains of corn, soybean, and canola. New modifications will be added as the scientists identify them.

It’s a bold vision. The Salk Crops (Carbon Removal on a Planetary Scale) project itself is funded in part with a $35 million grant from TED’s Audacious Project, a philanthropic effort backed by organizations including the Bill & Melinda Gates and MacArthur foundations as well as private donations.

Climate scientists have quietly begun to converge on a stark conclusion: The window in which cutting emissions by reducing the use of fossil fuels alone can reverse climate change has essentially closed. To keep temperatures on the planet from rising 2C above preindustrial levels, the stated goal of the 2016 Paris Agreement, humanity will also have to swiftly develop ways to remove carbon from the atmosphere. Chory says her plants may be one of the best hopes for doing so. “Ten years ago, I would have said this is a complete distraction from cutting emissions,” Rob Jackson, a professor of earth sciences at Stanford, says of the Salk effort. “Now, after another decade of emissions, I can no longer say that.”

Still, getting to mass adoption of CO2-trapping crops will require a sea change in attitudes as well as a major expansion of government incentives. It will also require an array of new technologies that allow farmers to better measure and document the amount of carbon their crops are removing from the atmosphere so they can claim these credits and sell them on the open market.

Chory spent more than 30 years decoding the molecular mechanisms that allow plants to grow and thrive—and demonstrating how it might be possible to hack into these structures and bend nature to human will. But it wasn’t until she was asked to prepare a talk on climate change in 2014 that she began to consider how she might apply her expertise to solving global warming. “Plants are really good at sucking up CO2,” she says. “So why are we building all these fancy machines? And where are we going to put them all?”

To find genetic variants to breed into crops, Chory and her team are using widely studied plants such as Arabidopsis thaliana. They can then work backward to identify the genes responsible for different qualities and use technologies like Crispr-Cas9, a revolutionary gene-editing system, to insert them into the crops of their choice.

A key to the Salk effort is the decision to home in on traits that increase the presence of suberin in parts of the roots that are not needed to absorb water or nutrients. A major constituent of cork, suberin is impermeable to water and far harder for microbes to break down than the rest of the biomass. It will hold the sequestered carbon in the soil for decades, possibly even centuries. They’ve also identified a handful of genetic variants that increase root mass—to boost the amount of carbon sequestered underground—and the ability of the roots to grow deeper where there’s less oxygen and few microbes are present to break the roots down.

“We know the Earth has the capacity to suck up more CO2 and bury it down in the soil,” Chory says. “The infrastructure is already all there. All we have to do is convince farmers to plant our seeds.”