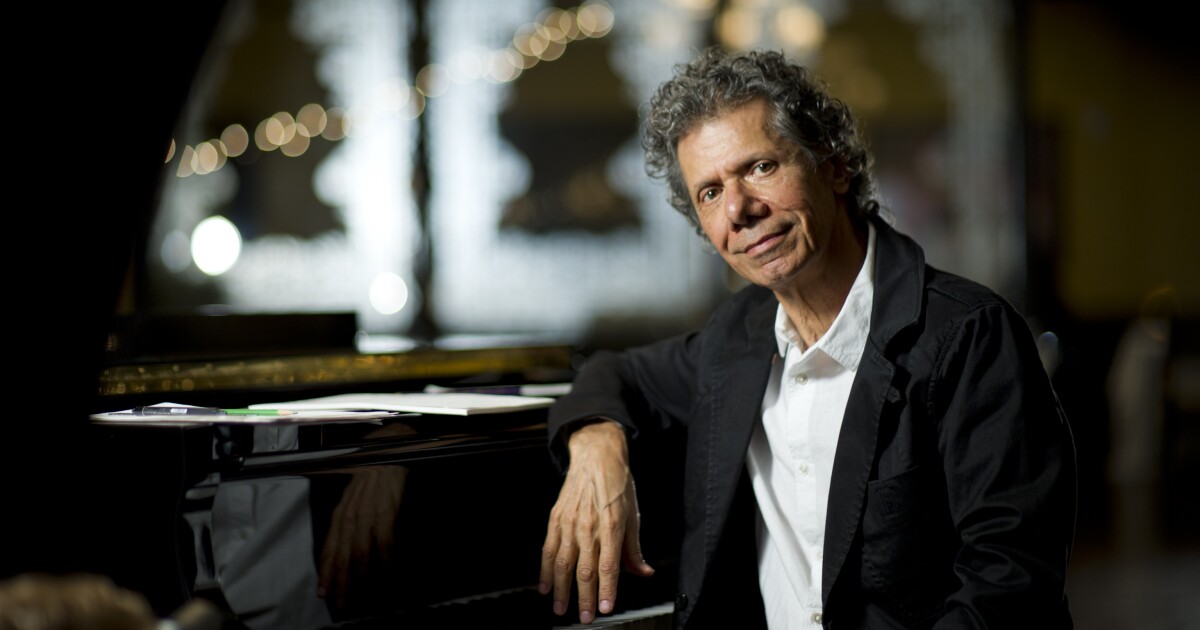 The coronavirus pandemic brought the careers of countless musicians to a standstill, including keyboard legend Chick Corea, whose European concert tour ended abruptly with the mid-March global shutdown.

But that standstill was brief for Corea, who in January earned his 23rd Grammy Award and has collaborated over the years with everyone from Miles Davis, Alicia Keys and flamenco guitar master Paco de Lucia to Foo Fighters and the London Philharmonic Orchestra. The Massachusetts-born native sprang back into action soon after returning from Europe to the Florida home he shares with his wife and periodic musical partner, singer Gayle Moran.

“We’re all anxious to go back on the road. But I’m unable to predict the way the restrictions will go, or when they will be lifted, so I’m creating as much as I can,” said Corea, whose splendid new live double-album, “Plays,” was released Friday by Concord Jazz. Recorded on tour in 2018, it features his singular solo piano renditions of music by everyone from Mozart, Chopin and Gershwin to Thelonious Monk, Stevie Wonder and Corea himself.

“The lock-down happened, and I realized how easy it is to go on Facebook to make music,” he recalled. “So I did.”

Using his new Apple iPhone 11, Corea sat down at one of the multiple keyboards in his home music studio and began practicing on Facebook Live. He continued to do so for the next 30-plus days in a row, for up to nearly two hours at a time. His livestreams, which also found him answering questions from viewers, struck an immediate chord.

Inspired by the enthusiastic response these impromptu live practice sessions garnered from fans around the world, he then assembled a multi-camera setup in his home studio. On May 14, he launched his online Chick Corea Academy.

The enterprising subscription website, which costs $29 a month, bills itself as “a global association for the advancement of Music and Art — with special instruction in music theory and performance.” Its four-point focus is on creativity, knowledge, imagination and improvisation.

In addition to weekly Sunday workshops with its famous namesake, virtual academy members receive a PDF copy of his book, “A Work in Progress … On Being a Musician.” Other offerings include from-the-vault releases of recordings by Corea that were not previously available to the public, augmented by his commentary about those releases. There’s also a community forum and a message board.

‘A sharing of ideas’

“It’s not like a school where there are tests or criticism,” Corea explained. “It’s more a sharing of ideas.”

“Basically, the academy is a platform where I answer questions in my own way. I let everyone know I’m not giving them rules. I’m sharing actions, practices and methods I’ve created that work for me. I encourage them to use them, if it works for them, and to find their own methods, ways, theories and harmonies in order to find their own individual expressions.

“The idea is to think for yourself, judge for yourself and show your own imagination to the world. We discuss technical things as well, and people tune in from all over the world.”

Corea has shared his musical approaches with students in the past, in both formal and informal settings. But his virtual academy is at least partially a response to the pandemic, which — at least for now — has brought to a halt concerts and live events.

Corea acknowledged as much during his 31st Facebook Live session on May 8, when he introduced his soon-to-debut academy and previewed part of his ambitious new composition, “Future Sweet.” The genre-leaping piece teams him with his wife, Moran, on vocals, banjo innovator Béla Fleck, drum marvel Vinnie Colaiuta and Cuban-born bassist Carlitos Del Puerto.

“With all of the chaos and hysteria, I’d like to promote creativity into the future, just create our future in a positive way,” Corea told his online academy audience.

Always eager to explore new vistas, the eclectic keyboardist, composer and band leader has been busy crafting new music to share through his academy and for upcoming releases. His partners during the pandemic have included such esteemed artists as flutist Hubert Laws, drummer/keyboardist Gary Husband and bass greats Stanley Clarke and John Patitucci, both of whom have played pivotal roles in Corea’s previous bands.

However, rather than work face to face, in real time, Corea and his collaborators have been doing so entirely online. It’s not an ideal scenario, especially for musicians who specialize in improvisation and in-the-moment reciprocity. But it enables them to safely interact and exchange ideas from a distance. They do so by trading sound files they make on Logic, the digital audio work station used by many professional musicians and studio engineers.

“Usually, I’ll initiate something. Sometimes, my friends will initiate,” said Corea, who in the early 1970s was one of the first jazz musicians to wholeheartedly embrace synthesizers. He subsequently began using various other cutting-edge electronic keyboard instruments and new technology.

His appetite for aural adventure has long been a trademark of Corea, who turned 79 on June 12 and swims laps every day, whether at home or on the road. His embracing of technology as a vehicle for engaging creativity, not a final destination, is a welcome attribute.

Accordingly, he is better suited to make music online than virtually any other jazz legend of his generation, apart from fellow keyboard maverick Herbie Hancock, who Corea replaced in the fabled Miles Davis Quintet in 1968. The two have since recorded and performed together, including a transcendent 2015 San Diego concert at Copley Symphony Hall.

Elaborating on his online music-making approach with his friends, Corea said: “One great game is that I’ll initiate and they’ll overdub and add something. Then I’ll add a third thing. It will go back and forth two or three times, until we have a finished piece of music, which I’ll mix.

“It’s similar to how we record in a studio, except that — doing it long distance — you can’t play in real time. But it’s more solid than trying to make music via phone or Zoom, because they don’t have that technology worked out where we can play in real time long distance. If they do, please let me know! Because everyone is looking for that.”

Prolifically making music, live and in the studio, has long been Corea’s forte. He has released six albums since 2017 alone, including in-concert recordings with his Akoustic Band and his all-star Trilogy group, with which he performed a sublime concert here last October at the Balboa Theater.

Currently the New York Philharmonic’s Mary and James G. Wallach Artist-in-Residence, Corea recently completed a trombone concerto for the philharmonic and is now at work on a percussion concerto for the Philadelphia Orchestra. He typically tours the world each year with several different bands and was scheduled — until the pandemic hit — to perform July 29 at the Hollywood Bowl with his Grammy-winning Spanish Heart Band and guest singer Rubén Blades.

In Corea’s remarkably gifted hands on “Plays,” following up the adagio section of Mozart’s Piano Sonata in F with Gershwin’s “Someone to Watch Over Me” makes perfect sense. Ditto his enchanting pairings of Evans’ “Waltz for Debby” and Jobim’s bossa-nova classic “Desafinado.” Equally rewarding is the deft manner in which he moves from longtime friend Stevie Wonder’s “Pastime Paradise” into a solo piano adaptation of “The Yellow Nimbus,” a piece Corea first recorded in 1982 with de Lucia — who died in 2014 — followed by a new version with his Spanish Heart Band last year.

“The composers whose music is on my new album have been an inspiration in my life for a long time,” said Corea, who recorded most of “Plays” at 2018 concerts in Berlin and Paris.

“I thought it would be interesting for the listeners to get a glimpse into my relationship as a performer with these venerable names, which is why I talked about it in my live shows. Are they just distant people? How do I relate to them? I’ve known Stevie for a lifetime. I met Bill Evans a few times as a young student of his; he was a mentor to me.

“I also met Monk a few times, as a young guy who was in awe of him. We got to hang around each other when I was in Mongo Santamaria’s band, and we played for three weeks at the Apollo Theater in New York with Monk’s quartet and Maynard Ferguson’s big band. I got to see Monk play every night, for three weeks, and that was my Monk University.

“As for the older guys like Mozart, Scriabin and Chopin, you used a good term — they are kindred spirits. So if we take away the barrier of time and living in different eras, I could easily envision talking shop with them and having a social or even a musical exchange, as pianists who are pursuing the same path playing music, composing and bringing it to the public.”

Corea’s debut solo album, the acclaimed “Tones for Joan’s Bones,” was released in 1968, the same year he joined Miles Davis’ internationally renowned quintet. Prior to then, he cut his teeth performing in the bands of such luminaries as Cab Calloway, Sarah Vaughan and Mongo Santamaria. He recalls each of them with infectious enthusiasm.

“The universities I’ve attended are just the best they could be — and those were my apprenticeships. That’s the way you learn a trade, an art form, and learn to live, really. You need good mentors and good teachers. You have to play with someone better than you and learn how to provide musical support and service to other band members. I did that for years.

“You can go to music schools and learn some basics. But there is an apprenticeship system, which is always what the final step is. I’ve had the best teachers, haven’t I? And I’ve been so lucky to have experienced all of that.”

What did Chick Corea learn while performing with such jazz giants as Miles Davis, Cab Calloway, Sarah Vaughan, Mongo Santamaria and Stan Getz. He tells us all about it in this bonus Q&A.