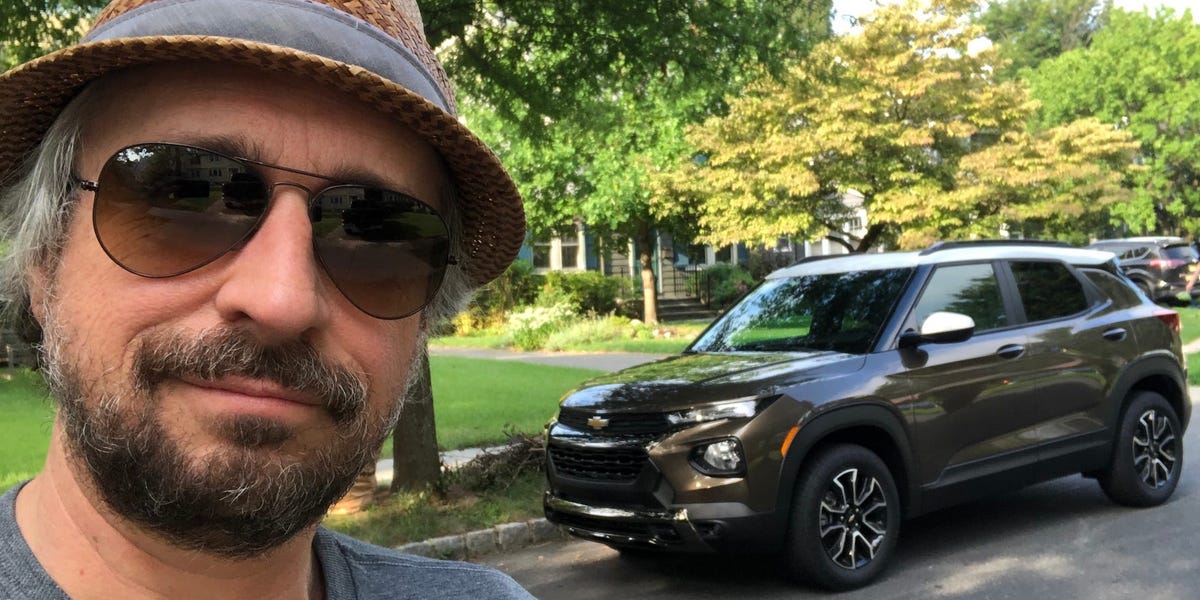 I really wasn’t sure about the 2021 Chevy Trailblazer going into a week-long test of the small crossover SUV. This is not your father’s Trailblazer, and in this case, I’m the father who remembers the nameplate from a larger, truck-based SUV that was discontinued in the mid-2000s. I was expecting a basic, entry-level crossover, easy on gas but nothing too impressive otherwise.

Instead, I enjoyed a nifty little SUV with compelling exterior styling, fully loaded with industry-leading infotainment and connectivity systems.

That makes the Trailblazer is a subcompact muscle-car SUV, except that it lacks anything even vaguely resembling muscle. The upshot? Chevy wants you to have something slightly jazzier than the Trax to start you out on the GM brand ladder.

Bring on the three-cylinder power!

My nicely optioned test vehicle cost $32,350, but the price before goodies was $26,900, and I sampled the Activ trim level with all-wheel-drive. The base front-wheel-drive version goes for $19,000. I got a white floating roof and a paint job dubbed “Zeus Bronze Metallic,” which suggests a lot of chromatic firepower for a ride this modest. The interior was “Jet Black,” boring but not cheap-looking.

Under the hood, the Trailblazer has a 1.3-liter, three-cylinder (yes, three) turbocharged engine that makes 155 horsepower with 174 pound-feet of torque. This is a step up from the 137-hp base motor, and the larger powerplant is mated to a nine-speed automatic rather than a continuously variable transmission. That’s a lotta gears for not a lot of power, and I anticipated fuel economy that was better than the rated 26 mpg city/30 highway/28 combined.

A snappy o-60 mph time is barely worth thinking about with a vehicle such as this; I clocked something like 10 seconds. However, the Trailblazer can muster sufficient torque to pass semis on the highway, and the motor’s punch is more appealing in zippy, around-town driving. You have normal, sport, all-wheel-drive, and sport modes to play with. Sport firms up the steering, but the steering was adequately frisky and assured in other modes.

Cargo capacity is 25 cubic feet under the (powered!) liftgate, rising to 54 if you drop the rear seats, which are bench design, provided limited legroom for adults. The fronts split the difference between firm and compliant.

Ride quality doesn’t come off as jittery, but the Trailblazer doesn’t always feel fully planted to the pavement, and as I noted earlier, I’d steer clear of trying to blaze any trails in this thing. One can tow up to 1,000 pounds, good enough for a small trailer or micro-camper, if you’re taking an outdoorsy excursion or working on the house.

The best part of the Trailblazer is undoubtedly the infotainment system, running on an eight-inch central touchscreen, combined with OnStar’s 4G LTE WiFi and wireless Apple CarPlay and Android Auto to go along with wireless charging (there are also USB ports for device connectivity, and Bluetooth pairing is a breeze). This is one of the best systems on the market, better than what you’d find in many luxury brands. An optional seven-speaker Bose audio system brings superb sound to the cabin.

Throw in a passel of driver-assist features and crisp, high-definition rear-facing camera and you start to think that while the Trailblazer is pricier than some other compact SUVs in this segment, at least as mine was well-configured, it’s money well spent. That $32,000 sticker is not excessive when you consider that infotainment and audio outdo a significant slice of the premium market, and the flashy styling tended to put a smile on my face.

The market for the Trailblazer is first-time car buyers, as well as vehicle-deprived urbanites striking out of the ‘burbs. But I could also see this package appealing to retirees who have a moderately active lifestyle, as well as frugal singles who aren’t chasing status. It’s certainly worth a test drive, if you’re eyeballing the Kia Seltos, the Mazda CX-3, or the Honda HR-V — and even if you’re considering slightly larger crossovers with bigger engines.

For me, well, I have a soft spot for Chevy SUVs, from the Trax (which performed admirably when I tested it in a blizzard several years ago) to the Suburban, a commendable beast whose latest iteration I enjoyed just a few weeks ago.

Much of my affection can be chalked up to the genre of small crossovers being fairly same-old-same-old, regardless of manufacturer. This makes styling and technology matter, along with propulsion. In the last category, the Trailblazer is rewarding as a suburban runabout, and it’s fun to take to a denser setting like Manhattan, to zoom around with the yellow taxis.

But in the end, it’s the tech that sets Chevy apart from the competition. And it’s the chief reason that you should consider buying or leasing a Trailblazer.