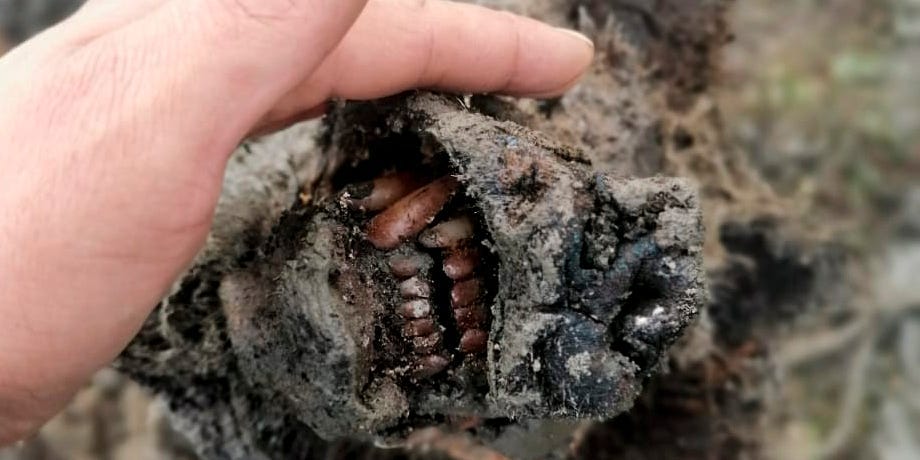 High above the Arctic Circle lies a group of remote Siberian islands where ivory traders and scientists brave sub-zero temperatures to search for extinct creatures preserved in the melting permafrost.

Scientists think the cave bear died between 22,000 and 39,500 years ago. Its species, Ursus spelaeus, lived during the last Ice Age then went extinct 15,000 years ago.

The carcass was first discovered by reindeer herders, who then alerted researchers at the North-Eastern Federal University (NEFU) in Yakutsk, Russia.

“This is the first and only find of its kind — a whole bear carcass with soft tissues,” NEFU researcher Lena Grigorieva said in a press release announcing the find on Monday.

Cave bears roamed while most of Europe and Asia were covered in glaciers, sharing the landscape with mammoths, saber-toothed cats, and giant ground sloths.

The creatures were massive: Males could weigh up to 1 ton (2,200 pounds), which is about 500 pounds heavier than the largest bears alive today.

Greigorieva and his colleagues said for now, the bear’s age is an estimation until carbon dating can pinpoint a more precise age. They also hope to study the carcass in further detail and perform a genetic analysis.

Another cave bear carcass — a cub — was recently found in Yakutia, Russia, so scientists hope to compare the two animals’ DNA.

Thawing Siberian permafrost has yielded other discoveries, too

As the planet warms, the Siberian permafrost — ground that remains frozen year-round — is beginning to thaw. As it melts, Ice Age creatures entombed within are starting to be unearthed after lying frozen for tens of thousands of years.

The Lyakhovsky Islands where the bear was found are replete with woolly mammoth remains from the last Ice Age.

Last year, scientists discovered a 40,000-year-old severed wolf’s head, complete with fur, teeth, brain, and facial tissue on the banks of a river in Yakutia.

Other ancient creatures found in the Yakutia ice include two extinct cave lion cubs and a 42,000-year-old foal.

As temperatures continue to rise, more remains will likely be found.