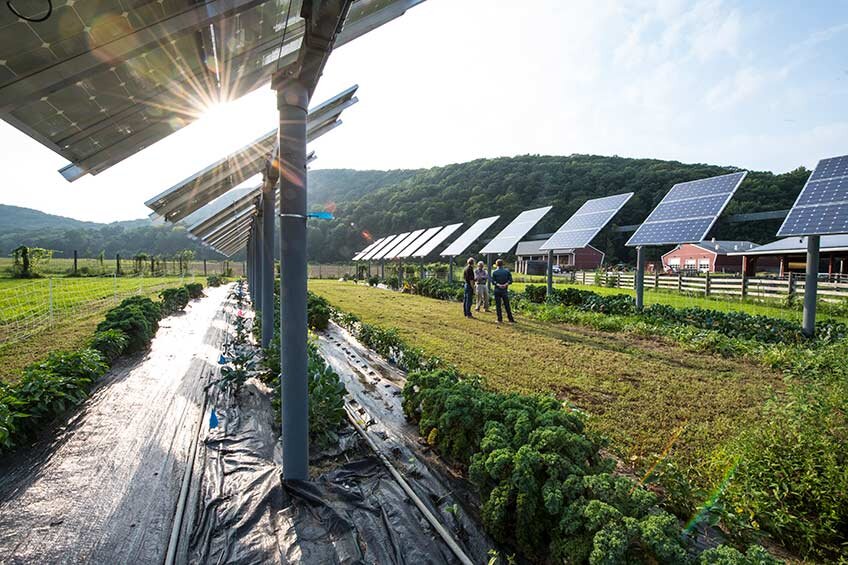 Projected to satisfy upwards of 30% of global electrical demand by 2100, solar photovoltaic (PV) technology has ushered in a new dawn for renewable, sustainable energy. Though promising, expansion of the energy technology is not without challenges.

The extensive landscape modifications necessitated by solar PV installation, for example, can have negative environmental impacts, particularly in the context of soil disturbance, which can affect soil moisture and nutrient distributions within the soil and its ability to host native vegetation. And these soil shifts can last for the 20–30-year lifespan of an array and possibly extend long past the installation removal.

In a recently published article for Frontiers in Environmental Science, National Renewable Energy Laboratory (NREL) researcher Jordan Macknick and colleagues from Temple University and the University of California, Davis, took a closer look at the effects of PV arrays on soil properties and whether revegetation can successfully mitigate negative impacts stemming from solar panel installation and construction.

To prep a site for solar array installation, under traditional practices, vegetation is removed, the surface of the ground is graded, and fill is added and compacted. Studies have found that the removal of vegetation around and underneath PV arrays can lead to a host of problems, from increases in runoff and soil erosion to rising air temperatures over PV arrays. And this could be a growing problem: By 2050, global solar energy deployment could claim roughly 25 million hectares of land—land that will undergo modifications that will impact its physical, chemical, and biological properties.

A variety of research has been carried out to improve the environmental compatibility of solar projects through topics such as the co-location of arrays and agriculture (known as “agrivoltaics”), as well as runoff and microclimatic impacts at PV facilities. NREL has studied the success of revegetation on solar sites, but the effects of the reintroduction of native vegetation on soil properties at such sites has not been widely studied or considered.

To assess the land surface impacts of PV deployment, as well as inform future site preservation guidelines, the research team completed a series of field-based investigations of PV arrays and co-location strategies on soil properties.

Getting Their Hands Dirty

Soil samples and field measurements were collected along three transects—a predetermined path where data is collected at regular intervals—in the revegetated area of the PV site, as well as from a fourth transect in the adjacent undisturbed grassland (reference soil).

The team took soil measurements and sampling at four points on each transect: below the east edge of each solar panel, beneath the center of the panel, below the west edge of the panel, and in the uncovered space adjacent to each panel. Each transect accounted for 16 sampling locations, 48 in total across the 4 transects.

The field samples were analyzed, comparing a range of properties from the revegetated site samples to those from the undisturbed site:

Moisture was found to be greater at the solar PV site. Researchers believe this can be attributed to the shading and wind shelter provided by the array.

They also found that PV arrays can increase heterogeneity in moisture distribution, particularly along the low-lying edges of the panels. This could carry implications for co-located agriculture, particularly in arid climates.

Researchers found that, while there were no measurable differences found in grain size distribution between the solar PV site and the reference soils, they did find that hydraulic conductivity, or the soil’s ability to drain water, was elevated in the area directly below the solar panels. This could be attributed to reduced site maintenance-related disturbances—undisturbed soil is less compacted and, thus, is more effective at draining moisture.

Researchers observed substantially lower concentrations of total carbon and nitrogen levels in the solar PV soil versus the reference soil, likely caused by the removal of topsoil during the construction of the arrays. The research suggested that 7 years following the construction of the PV site, the nutrient cycling had not yet reestablished nor was the soil able to sequester carbon as could the native soil. Long-term research is needed to understand the impacts on a decadal scale.

Overall, heterogeneity was a common theme of the findings, from spatial to environmental; however, researchers found that it was not an entirely problematic proposition.

The presence of the arrays did cause spatial heterogeneity in soil moisture, meaning that the solar panels led to concentrated areas of moisture in the soil beneath the panels due to their position and orientation. And while the soil properties found in the array samples differ from those in the native plot, the researchers found that panels could be strategically oriented to guide rain toward or away from the soil below, meeting the irrigation needs of different types of plants.

Moreover, because the uncompacted soil beneath the panels allowed it to drain moisture rapidly, it could serve as a suitable growing space for drought-resistant, co-located crops.

A key takeaway from this research is that solar panels could be used to redistribute precipitation, with positive implications for co-location of agricultural crops. To best exploit the moisture-controlling capabilities of the PV panels, installers must understand the timing and direction of rainfall to produce the desired soil moisture effects.