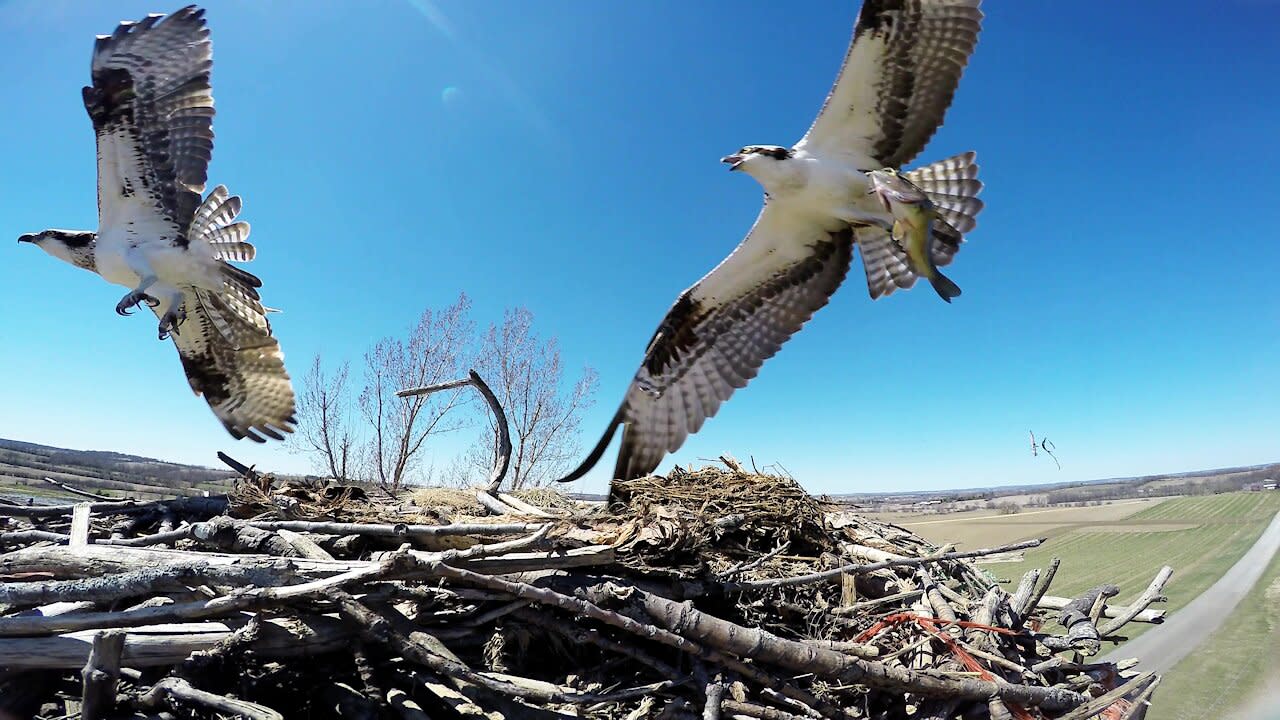 Osprey, known as fish eagles are enormous birds of prey, second in size only to bald eagles. They are found throughout North America, and they are more common in Canada than bald eagles are. Nesting on hydro poles and dead trees, they are always found near open water, as their primary source of food is fish. They are incredibly skilled at dive bombing from above to snatch a fish out of the water and carry it off to be eaten. They will often seize fish that are even heavier than they are. These osprey have just returned to Canada from their winter migration. A breeding pair have found their usual nest and they have taken up residence to start their family.

A nature enthusiast has found an ingenious way to install an action camera in the nest. The biggest challenge was that the cameras had a limited battery life and they needed to be removed and replaced frequently. The cameras also needed to be installed in a way that did not disturb the fish eagles.

He constructed wooden box that was equipped with small pulleys. This allowed him to secure two GoPro cameras to a pole that could be moved up and down through the wooden box. The camera could be quickly removed when the birds were away from the nest. They could be replaced quickly to avoid disruption.

The cameras recorded the pair in action for several weeks, documenting their mating habits, feeding activity, and their daily routines.

It was a surprise to the researcher that the camera also recorded some ferocious battles over territory and food, as they took place between the nesting pair and two other osprey.

The videographer has spent nearly one hundred hours watching the footage of the birds. The different individuals are uniquely coloured and even have distinctive voices and cries. In many clips, it is easy to distinguish between the four birds who appear. The lady of the house and her mate are known as “Spitfire” and “Mrs. Spitfire”. The invader is known as “Freckles” due to her unusual light patches on the outer surface of her wings. The females have more dark markings on their throats than the males in these pairs. In one dramatic battle, Mrs. Spitfire is guarding her nest and she is awaiting the return of her husband. He has been gone for quite some time and Mrs. Spitfire is always watching the skies above and around her. Fish eagles have very keen eyesight and her shrill cries of excitement are different when he is approaching, showing that she can recognize him from quite a distance. She appears agitated just before the arrival of Freckles. Her gaze is locked in on the intruder as she swoops in from the left and curves to head right at Mrs. Spitfire. In an unprovoked attack, Freckles opens her talons and comes right in for an attempt at piercing Mrs. Spitfire’s neck and back. Osprey talons are razor sharp and they have barbs that help grip fish. These talons could easily cause a fatal injury to another bird.

Mrs. Spitfire spreads her wings as if ready to counter attack and then she flattens out on her belly. Freckles sails over her, missing by only a few centimeters. Her talons close as she attacks, showing that she intended to kill Mrs. Spitfire. She flies off camera but returns for a second attack. Mrs. Spitfire needs to get her talons into an offensive position and she inverts herself to try to grab Freckles. Freckles misses a second time and flies off to the left. Both struggle to gain altitude and advantage. Mrs. Spitfire is behind and in a better position to chase Freckles away. Both of these birds appeared in later footage, indicating that neither was injured in this aerial battle. Nature can be beautiful but it can also be harsh and unforgiving. The struggle for survival is a difficult one and threats can come from any direction for animals such as these.

Enjoy this vivid and spectacular footage of nature at its finest!