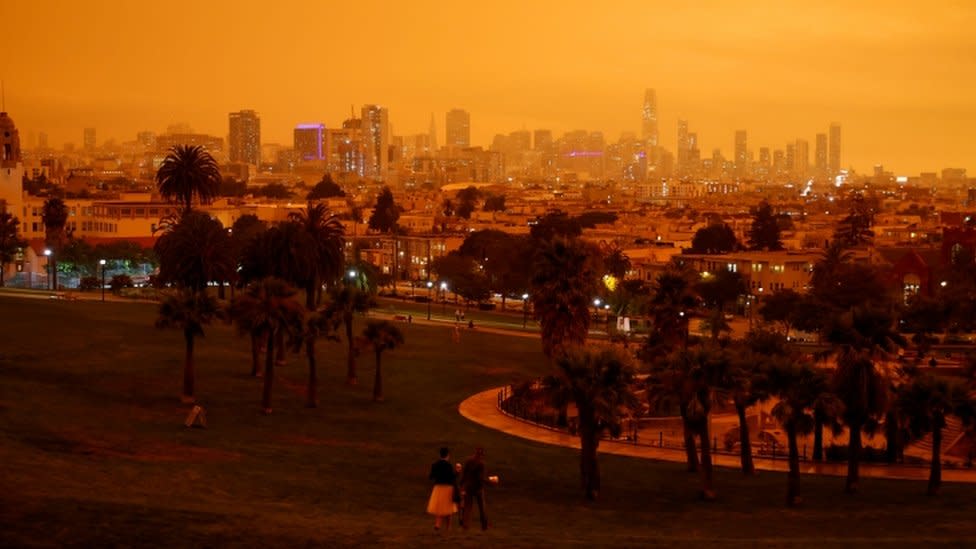 A plume of smoke from wildfires in the US state of California has descended on the San Francisco area, causing the sky over the region to turn orange.

Some 14,000 firefighters are battling 28 major blazes across California, amid a historic heatwave.

Wildfires have burned more than 2.5 million acres in the state this year, killing at least eight people.

On Wednesday, strong winds blew smoke and ash from some of those blazes in northern parts of the state.

Residents of San Francisco and the surrounding areas woke up to darkened skies, disorientating some, who thought it was still night time.

“It feels like the end of the world,” Catherine Geeslin, who lives in the West Portal area of the city, told the San Francisco Chronicle.

“It was alarming to see it’s still dark. And it will be strange to have lunch in the dark. But you still have to get on with your day.”

Local media reported that it still appeared to be dawn at 10:45 (18:45 BST), as the sun’s rays struggled to penetrate the thick smoke.

In a tweet, Daniel Swain, a climate scientist at the University of California, Los Angeles (UCLA), said “extremely dense” and “tall smoke plumes” were “almost completely blocking out the sun”.

Extremely dense & tall smoke plumes from numerous large wildfires, some of which have been generating nocturnal pyrocumulunimbus clouds (“fire thunderstorms”), are almost completely blocking out the sun across some portions of Northern California this morning. #CAwx #CAfire pic.twitter.com/y9evl4u0eq

That smoke, experts said, was also behind the sky’s orange glow.

“This is not a common sight because this takes very specific conditions in order for this to happen,” National Weather Service (NWS) forecaster Brian Garcia told SFGate. “Obviously, you need fires that have ample smoke production.”

As wildfires continue to burn, forecasters expect similar conditions in the coming days.

Meanwhile in Oregon, Governor Kate Brown said this was a “once-in-a-generation event” that could bring about “the greatest loss in human lives and property in the state’s history”. Officials said at least two people had been killed.

In Washington state, a one-year-old boy died after his family was apparently overrun by flames while they attempted to flee their property.

More on the California wildfires

All images subject to copyright.