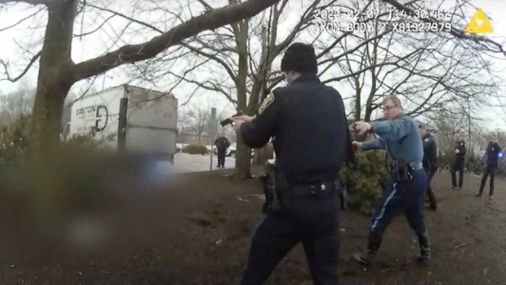 “I’m still on, I’m still on,” an officer said, gesturing to a camera, as a colleague approached.

A trooper offered another officer a reproof: “Just shut your [expletive] mouth. You got a [union] rep coming? … You did nothing wrong.”

“Yeah, yeah, I won’t talk,” the officer responded. Another advised: “Don’t say nothing to nobody.”

Minutes later, when the directive came across the police radio to turn off all body cameras, some officers exhaled deeply.

These outtakes from one of the first batches of footage made public under Boston’s fledgling police body camera program offer a rare, street-level glimpse into unvarnished police behavior amid the chaos of a crime scene.

The videos, released following a Globe records request, have the potential to enable a deeper level of scrutiny than police officers in Massachusetts have been accustomed to. Body cameras, in wide use in some other jurisdictions, are comparatively new here and it remains to be seen whether their presence will influence or even improve police tactics. For years, advocates for body cameras have argued their deployment would help curb police abuses, make officers more accountable, and generally improve police tactics.

“We know what officers do, that’s why we wanted cameras,” said Segun Idowu, a founding member of the Boston Police Body Camera Action Team that first pushed for a camera program in Boston in 2016.

The Norfolk district attorney recently cleared the police officers of any criminal wrongdoing in the Root shooting, though Root’s family has filed a wrongful death lawsuit claiming excessive force, based in part on the body camera footage.

The lawsuit also highlighted questions about the transparency of the body camera program: Only one of the Boston officers who shot Root had a body camera turned on at the time of the shooting. Two officers allegedly turned the cameras on minutes later, and two weren’t wearing them at all.

Boston police would not say whether they are reviewing the officers’ use of the cameras, though several appear to be in violation of department policies. Officers are supposed to shut their cameras off under only limited circumstances, such as to protect the privacy rights of bystanders.

The officers union, the Boston Police Patrolmen’s Association, would not comment.

Idowu, executive director of the Black Economic Council of Massachusetts, noted that the very purpose of this technology is to record incidents such as the Root shooting. But it’s only effective if the department fully embraces it.

“What is the point of having these tools if you’re not going to actually hold people accountable?” he said. “The whole purpose is accountability, on top of transparency.”

The use of body-worn cameras is relatively new to policing, its adoption often fought by police unions and the officers forced to wear them. A 2015 report by associations for major city police chiefs and county sheriffs found that 19 percent of the agencies were already using cameras and 77 percent were in the early stages of implementing camera programs. The numbers have increased since. A proposal before Congress, under the COPS Accountability Act of 2020, would require all departments to have them.

In Massachusetts, body-worn camera programs have been slower to take off, used in Boston and only a handful of small towns. Boston’s program came after a strong push by community groups. In 2016 the patrolmen’s union initially sought to block a pilot program through legal action but lost that battle.

Interest statewide is growing. The State Police said troopers could have cameras by the end of the year, while other communities such as Somerville and Worcester are exploring the possibility.

Amid a national reckoning over systemic police abuses and growing demands for reform, the calls for cameras have only intensified. Boston Mayor Martin J. Walsh commissioned an independent task force in June to study police reforms, with one of its directives to explore best practices for a departmentwide body camera program. The task force could present a draft report this week.

A Northeastern University study of Boston’s pilot program in 2017 found that some officers feared their conduct would be overly scrutinized and that video evidence would subject them to undue discipline. Even though none of them had, to that point, faced camera-related discipline, they still worried about the potential.

The report ultimately found “small but meaningful” benefits from the cameras: Officers who wore cameras received fewer complaints and generated fewer use-of-force reports than a comparable group without cameras.

Some studies have shown that the behavior of officers with cameras was indistinguishable from those without. Other studies, including a 2017 review in Las Vegas, found that in some cases, cameras led to more arrests, possibly because officers were less likely to engage people and more likely to go by the book, rather than seek alternatives to arrests. But the reviews still found that officers with cameras generated fewer use-of-force reports and citizen complaints.

Chris Burbank, vice president for law enforcement strategy at the Center for Policing Equity, said officers are bound to be skeptical of any new equipment, especially cameras that are meant to raise the level of scrutiny that officers face. He’s reviewed cases of excessive force across the country in which officers can be heard warning each other, “I have a body camera, I have a body camera.”

“The first instinct when you’re not accustomed to it is, ’Oh boy, this will all be captured,’” said Burbank, who implemented a camera program a decade ago while head of the Salt Lake City Police Department. “But I think officers become more aware, to say, ‘This is how we do business,’ after a certain amount of time.

In some cases, body camera footage provides the only available evidence.

Last week, newly released footage showed that a man who died in police custody in Rochester, N.Y., had a “spit hood” — which is meant to protect officers from being spit on — placed over his head and had been pinned to the ground by officers for close to two minutes. The footage, obtained by a lawyer for the family of Daniel Prude, contradicted initial police accounts that Prude died of a drug overdose. The autopsy report from the medical examiner said his death was caused by “complications of asphyxia in the setting of physical restraint.”

What is clear, said Iván Espinoza-Madrigal, executive director of the Lawyers for Civil Rights in Boston, is that communities are demanding a greater level of scrutiny and accountability, and see body cameras as one important way to that goal.

“This is a relatively new level of scrutiny being placed on police officers and police departments,” Espinoza-Madrigal said, “so I can absolutely appreciate that any police department would have culture changes that need to be addressed.”

The unfiltered insight into Boston police behavior was also on display in footage of Operation Clean Sweep, last year’s police operation to address open drug use around the Newmarket Square area. Videos show officers using tactics to detain people on the street that civil rights groups said were legally questionable.

At one point in the operation, a younger officer asked a supervisor, Captain John Danilecki, whether he should keep his camera rolling. Danilecki told him yes, because he wanted to show the American Civil Liberties Union that officers were doing things “by the book.”

The ACLU in Massachusetts, which obtained the footage through a lawsuit and released it in July, took issue with the remark, saying the footage actually showed officers were violating peoples’ civil rights. Suffolk District Attorney Rachael Rollins criticized the use of heavy-handed police tactics.

Carol Rose, the head of the ACLU, said body cameras can be effective. But their effectiveness depends on a sound policy that dictates when an officer should use a camera and includes strict limitations for turning them off. The ACLU has called on the courts to adopt new standards that would allow jurors to discount evidence whenever a working body camera was turned off or allegedly made inoperable.

“The point of this is to include accountability for police officers, that’s the purpose,” Rose said. “It shouldn’t be just a matter of police culture, but it should have consequences in the courts.”

In the days since the release of footage in the fatal February police shooting, Juston Root’s family has called for Norfolk County investigators to reopen the case.

The Globe reported late last month that the video footage appears to contradict a key aspect of a District Attorney Michael W. Morrissey’s report that found the shooting was justified.

Morrissey’s report cites one of the officers involved in the shooting saying he heard another officer shout “gun” immediately before he opened fire. The videos do not appear to show anyone describing a gun before police fired their weapons.

According to the family’s lawsuit, the officers said in statements later they never saw Root point or brandish a gun.

In that lawsuit, Root’s family is leaning on one, key unassailable piece of evidence to make their case: body camera footage.