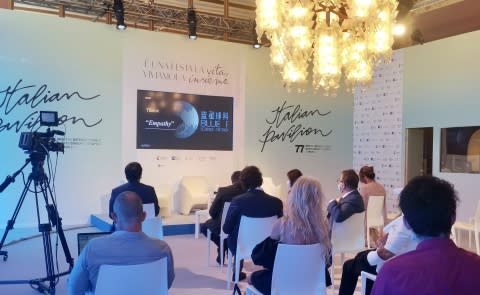 China’s Blue Planet Science-Fiction Film Festival was highlighted at the 77th Venice International Film Festival during the “Focus on China” side event earlier this week, bringing a glimpse of the future to the world’s oldest film festival.

The Venice International Film Festival is one of the first major cultural events held in Europe since the outbreak of the COVID-19 pandemic. The fact that the festival – one of the film industry’s most important annual events – could go ahead offline as planned is a major boost to a sector that has been hit hard by the pandemic. The “Focus on China” event was held in the National Pavilion of Italy and streamed online.

2019 was an international breakthrough year for Chinese sci-fi cinema. November 2019 saw the inaugural Blue Planet Sci-Fi Film Festival, the first of its kind in China. It recorded great success, with 185 sci-fi films from 17 countries screened and a series of activities such as forums, masterclasses and exhibitions held.

The second Blue Planet Sci-Fi Film Festival will be held in November 2020. In light of the difficult times our world is going through, the theme of this year’s festival will be “empathy”. “Amidst this global crisis, it is more important than ever for people around the world to transcend barriers and engage with each other,” said the Blue Planet Organizing Committee in a message to the event.

Industry figures at the Venice Film Festival noted a buzz around the development of Chinese sci-fi. Roberto Stabile, head of international relations for the Italian motion picture association ANICA, said, “I was very impressed by this introduction to the Blue Planet Sci-Fi Film Festival, and look forward to welcoming our friends from the Blue Planet in Venice next year.”

Italian-Chinese filmmaker Shi Yangshi said, “Two years ago, Italian director Giuseppe Tornatore talked to me about Liu Cixin’s sci-fi novels and showed great interest in co-producing sci-fi films with China.” Italian producer Luca Confortini remarked, “China has a well-established film culture and its sci-fi films have been developing rapidly. The Blue Planet is an important and vibrant film event; I believe that China’s sci-fi film market will only grow bigger.”