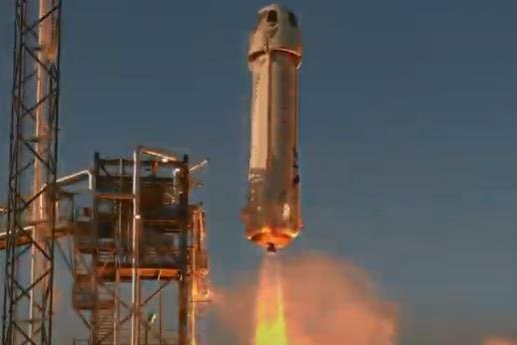 Blue Origin plans a launch Tuesday morning in West Texas for its New Shepard rocket, like this one that was launched Jan. 23, 2019. Photo courtesy of Blue Origin

Blue Origin plans a launch and recovery on Tuesday morning in West Texas for its New Shepard rocket and capsule, like this one shown in an undated photo. Photo courtesy of Blue Origin

Blue Origin plans a launch Tuesday morning in West Texas for its New Shepard rocket, like this one launched in 2016. Photo courtesy of Blue Origin

Liftoff is scheduled for 9:35 a.m. EDT at the company’s launch facilities about 150 miles east of El Paso. The company postponed the launch twice before — once due to cloudy weather and again the next day due to a power supply problem on board the rocket.

The NASA experiment is part of the agency’s Tipping Point program, which seeks to demonstrate technology that can be adopted by private industry. The project includes a collection of sensors designed to help locate a safe site on the moon for upcoming landings, according to NASA and Blue Origin’s mission description.

“A NASA-developed sensor suite could allow robotic and crewed missions to land precisely on the lunar surface within half the distance of a football field,” NASA said of the project. “The rocket’s flight path is relevant to lunar landings, providing a unique opportunity to mature sensors and algorithms for potential use on Artemis [moon] missions.”

Those sensors require clear skies to function properly and that was the cause of the initial delay.

Lunar landings are important to Blue Origin because it leads the so-called National Team in developing a human lander for future moon missions. The team includes Lockheed Martin, Northrop Grumman and Draper.

The sensors are the first payload to fly mounted on the exterior of a New Shepard booster rather than inside its capsule, which the company said could open up opportunities for other exterior technology, including “a wide range of future high-altitude sensing, sampling and exposure payloads.”

The launch would be the 13th New Shepard mission and the seventh consecutive flight for the rocket, which is 60 feet high and emits 110,000 pounds of thrust.

The company, owned by Amazon founder Jeff Bezos, one day wants to fly space tourists in a capsule designed for six people as it also develops its larger New Glenn rocket.

At least two plant experiments are in the rocket’s capsule for the so-called NS-13 mission, one of which was designed by researchers at the University of Florida’s Ferl/Paul Space Plants Lab.