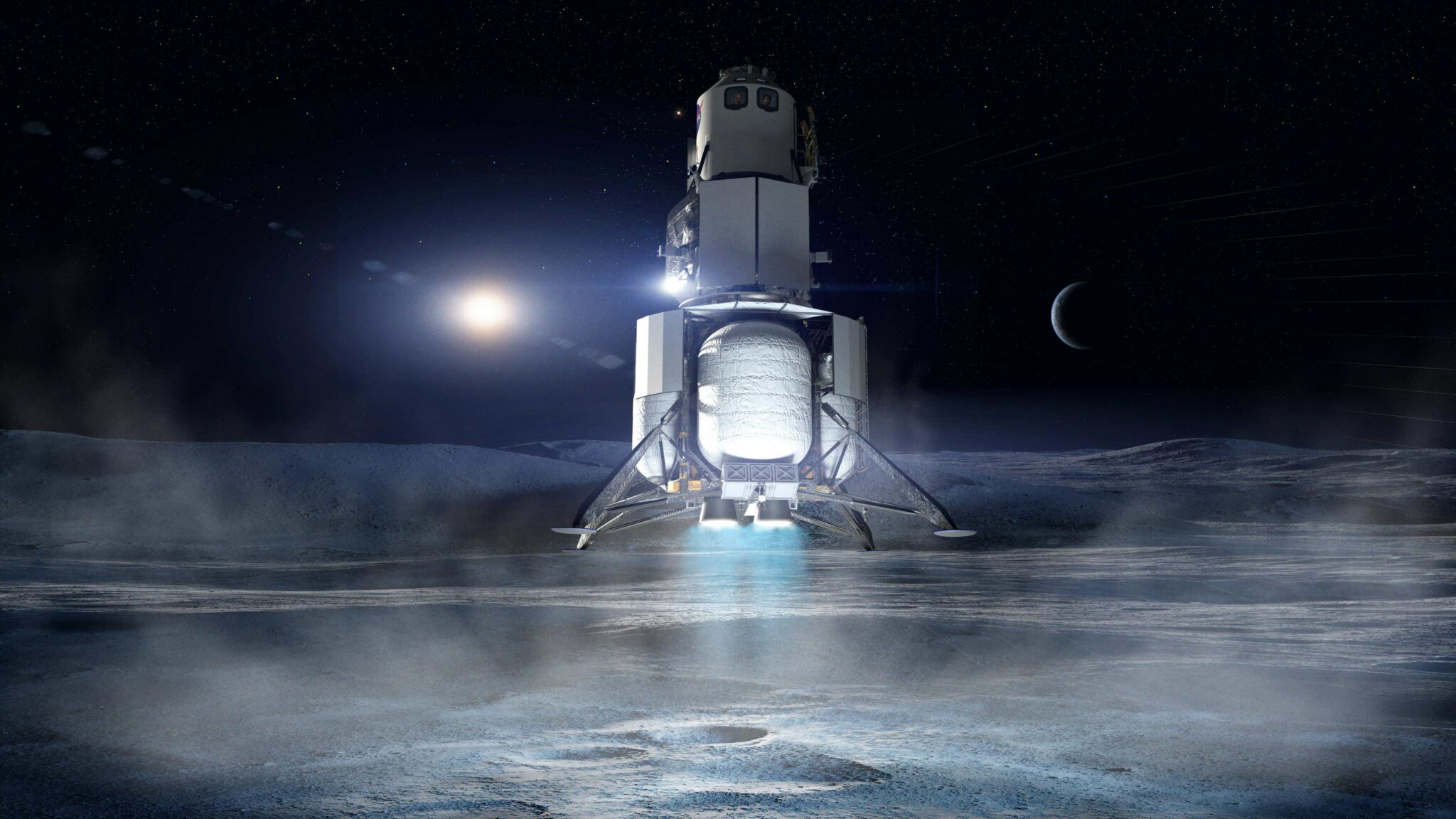 The milestone — known as the system requirement review, or SRR — involves specifying the baseline requirements for the missions, the space vehicles and the landing system’s ground segment.

“The design proceeded to the NASA Certification Baseline Review, followed by the lower-level element SRRs and the preliminary design phase,” Blue Origin reported today in a news release.

Blue Origin leads what it calls a “National Team” in the first phase of the NASA’s Human Landing System development process. While Blue Origin is working on the system’s descent module, Lockheed Martin is responsible for the ascent module, Northrop Grumman is in charge of the transfer module that would get the lander into low lunar orbit, and Draper is working on the system’s avionics.

SpaceX and Dynetics are working on parallel efforts, and next year, NASA is due to select one or two teams to move on to the next phase of development. For this first phase, the Blue Origin-led team is receiving $579 million from NASA, while SpaceX is in line for $135 million and the Dynetics team is getting $253 million. The money is disbursed as each team reaches milestones like the one reported today.

Blue Origin’s Nick Patrick and Mike Good, former @NASA astronauts, visited @NASA_Johnson to evaluate our National Team’s engineering mockup – a step in our journey to return to the #Moon. We are fortunate to have their experience to ensure astronaut compatibility. pic.twitter.com/IBN5szSSVY

The public-private partnership is meant to provide astronauts with their ride to the lunar surface and back up to the yet-to-be-built Gateway space outpost, starting as early as 2024. NASA’s Orion crew capsule, built by a team led by Lockheed Martin, will be used to transport astronauts to and from the Gateway.

Blue Origin said its team has reached agreement with NASA on dozens of design and construction standards. In addition, hundreds of health and human performance standards and requirements have been set.

“Completion of this review allows the National Team to move forward in its design, much of which is evolving directly from existing systems such as Orion, and that maturity was exhibited in the review,” said former acting NASA Administrator Robert Lightfoot, who chaired the review in his current capacity as Lockheed Martin’s vice president of strategy and business development.

The review board included members of Blue Origin’s Blue Moon Science Advisory Board. “A complex undertaking like human lunar landings requires paying attention to thousands of details, and thinking through every likely contingency,” said Harrison Schmitt, an Apollo 17 astronaut and former U.S. senator who serves on the science advisory board.

“I was very impressed at the depth of engineering and operational sophistication shown in the Systems Requirements Review,” Schmitt said in today’s news release. “The National Team is working to directly apply the lessons from the Apollo experience to make America’s next crewed lunar landing successful and the precursor to sustained human activity on the moon.”